Although there is plenty of room to min-max your character in Dungeons and Dragons' Fifth Edition, the game is in essence a storytelling medium. This means that you can create more or less any character you can imagine, no matter how good or bad they would be in a fight or conversation.

Baldur’s Gate 3 is very much the same, in the sense that you could make a character that isn’t particularly strong. Thankfully, Baldur’s Gate does try to recommend skills and abilities in the character creation, but there is still plenty of room for customisation.

For all the players that are a little unsure of all the different yet similar numbers and words, this guide will help examine what everything means and offers a few simple suggestions (in addition to the ones we already provided on Tuesday). 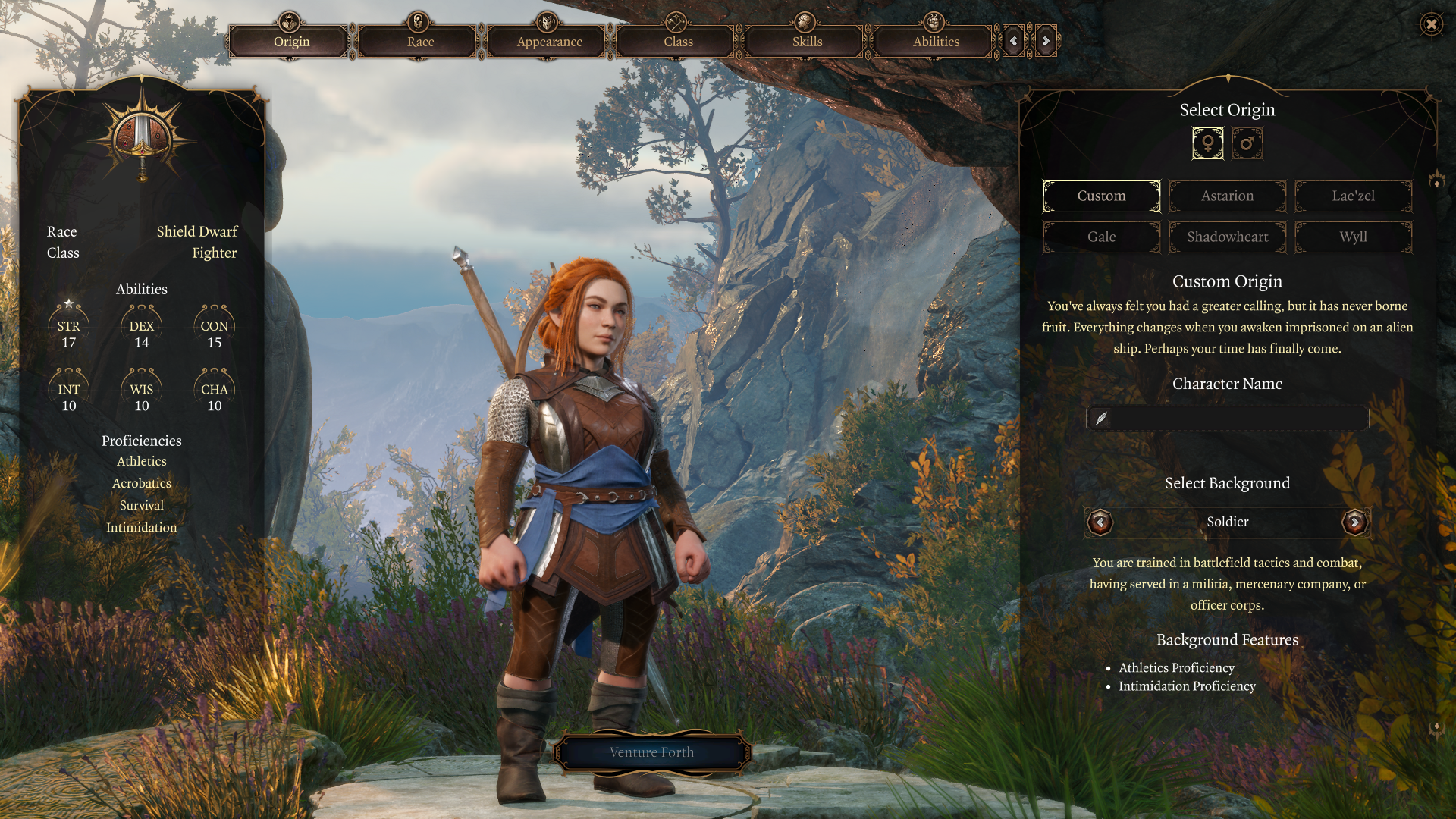 Baldur’s Gate 3 will ask you to pick your origin first. It isn’t the easiest thing to pick, however. If you’re just starting on the character creation and have no idea what you’re doing, you should skip straight to the class selection and ability scores first. Then loop back to your origins and race, and appearance.

When choosing an origin, you will have a bunch of options that help flesh out your character's background. More importantly, they award your character some proficiencies as well. A proficiency, simply put, allows you to add more to the virtual dice roll you’ll be making in that skill. The other bonuses come from the ability score, which we’ll get to later.

When choosing what your origin should be, think about what class you have already picked and which abilities you have put the most points in. If, for instance, your character is a charismatic warlock, you might want to pick Guild Artisan, or Criminal as it will give you proficiency in Charisma based skills, making you more likely to succeed them. Intelligent wizards might want to select Acolyte or Sage.

Another option would be to select a background that gives you proficiency in skills that your hero would otherwise struggle with. This Jack of All Trades approach is risky though, as your character will struggle to handle every situation at the beginning of the game, and the rest of the team should be able to support your hero with the skills he doesn’t have. 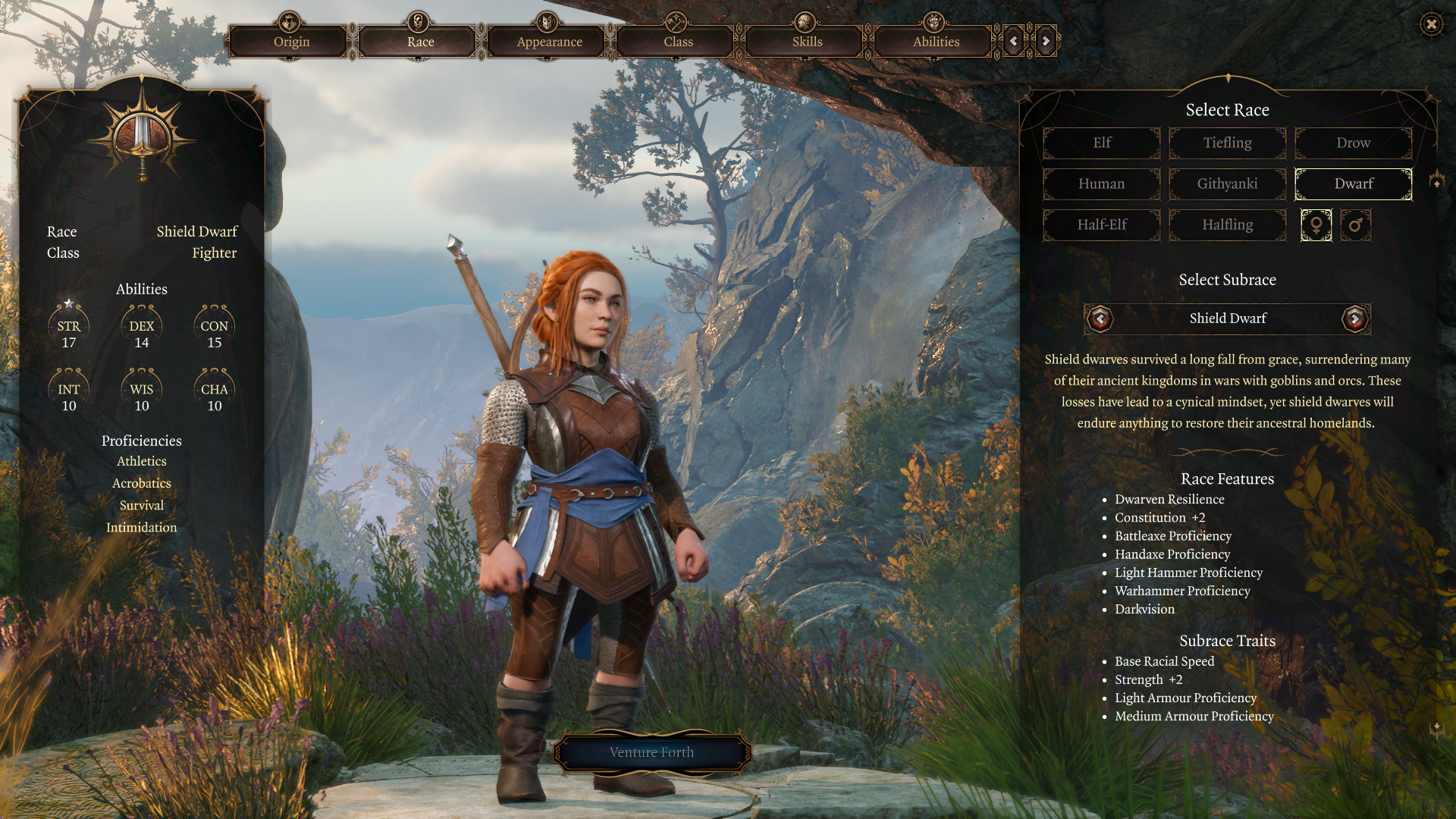 Right now you have access to eight races in Baldur’s Gate 3, from the typical human, elves, and dwarves, to the more unique Githyanki and Tieflings. Each race comes with a selection of Racial Features and Subrace Traits. These can be anything from bonuses to your ability scores, additional proficiencies, or extra skills, cantrips, and abilities to use in the game.

Because all but the Human and Githyanki have a selection of subraces, there are far too many to write down here. But when selecting your race, it is once again easiest to do this when you already know what your class is going to be.

Most races offer a plus to one ability or another, and that is often a good starting point when making your decision. Humans get a small bonus to each ability, while half-elves let you select which abilities will be improved, making them the most versatile if you’re building a class you can’t find a good race for. Clerics, for instance, need high Wisdom, but only Wood Elves and Gold Dwarves naturally increase your Wisdom ability score.

Another point to remember is that Humans, Githyanki, and Halflings do not have dark vision. This may not seem that important at the start but if the rest of your party is perfectly happy sneaking through the shadows, these party members will have to use tools or magic to keep up.

For the most part, though, the race should be selected to support your playstyle and the class you want to play as. Although the ability score is the best and easiest way to look at them, make sure you see what the rest of the abilities do and think about how you might use them in practice. 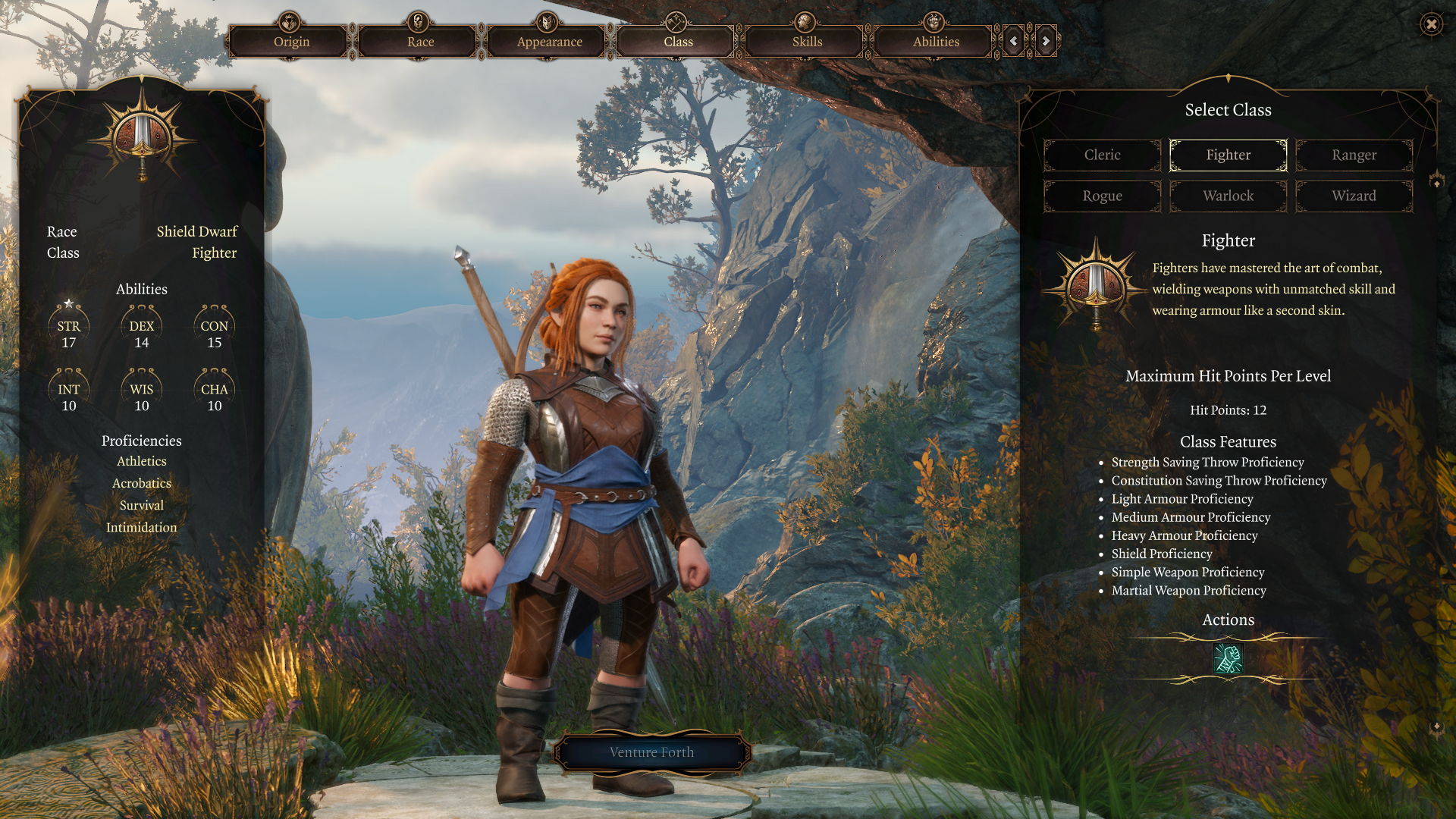 To begin with, we have access to six classes in Baldur’s Gate 3 and they can be broken down into three categories: Magic Focus, Mixed Magic Focus, Combat Focus. Unlike the Divinity series, classes are a little more segregated and you can’t just mix and match what skills you want, so selecting a class will significantly affect the way the rest of this campaign runs. Magic Focus classes obviously get all their abilities and utility from magic, while Combat classes are based on physical prowess. Mixed Magic Focus blends the two, allowing you to create a hero that is both capable of swinging a weapon and casting a spell.

Warlocks and Wizards are both easily considered Magic Focus. Selecting either of these classes means your character will not be very hard to kill but can cast a number of different, powerful spells that have a range of effects.

Mixed Magic Focus classes include Clerics and Rangers. These classes will use their weapons as well as spells in and out of combat. They don’t have access to the same library of potential spells that Pure Magic Focus classes do, but their skills aren’t to be easily dismissed either.

Pure Combat classes are the Fighter, unsurprisingly, and the Rogue. Although both can dabble in magic, the first few levels will have them using their weapons and physical abilities rather than any supernatural gifts.

When selecting a class for your hero, you want to think about what you want them to do, and what you’ll enjoy focusing on yourself. Thanks to literally decades of tweaking and balancing in the tabletop editions of Dungeons and Dragons, none of the classes is particularly underpowered. Likewise, there isn’t a ‘right’ choice when it comes to choosing one, so the choice is yours.

One thing worth noting is that some classes have different rules, the most notable of which is the Warlock. While other spellcasters will have an ever-growing pool of spell slots they can expend to hurl their magic, warlocks will get relatively few. But instead of each being connected to a specific spell level, every Warlock spell slot will be expended at the highest level possible. This means that warlocks will generally be using their cantrips more than other magic classes, but will have devastating powers available for a special occasion.

Similarly, Rogues are not the same as fighters. Often referred to as glass canons, Rogues can deliver incredible damage from the very start of the game but are rarely in a position to take much punishment themselves. Each class is governed by certain abilities over others, and you should take note of this when deciding what to play as. You can see the important abilities marked with a star on the ability screen.

For more tips and tricks on combat, check out our dedicated guide. 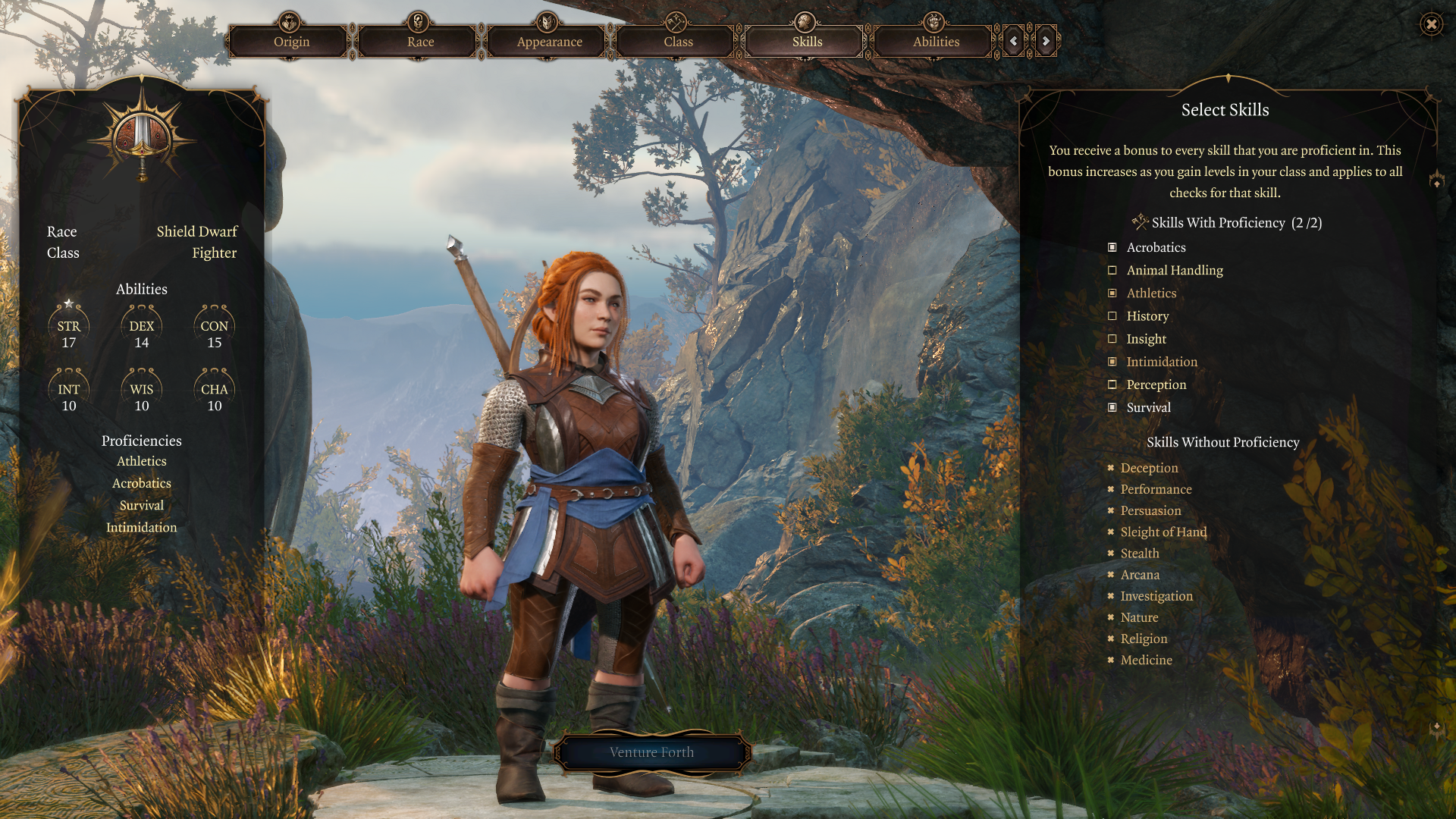 Your skills are how Baldur’s Gate 3 breaks down most of the interactions you’ll have with the world outside of straight combat. Climbing a cliff's edge, for instance, could be the Athletics roll, while lying your way out of trouble will probably require some Deception. These are again tied to your ability score, so Strength will govern your Athletics, while Charisma will assist in your Deception.

You can get an added bonus to these through proficiencies. As mentioned above, your background and race will reward you certain proficiencies, but you’ll also have a couple to select yourself. These should once again reflect your character's strengths, rather than trying to balance them.

For instance, Fighters, with their high Strength, should look to make sure they have Athletics, Clerics and Rangers should have Perception and Survival skills, and Rogues should focus on the dexterous ones. Some classes have multiple primary ability scores. Remember though, it is not your hero’s job to carry the entire team, where your skills may not suffice you should simply find a party member that can fill that gap. 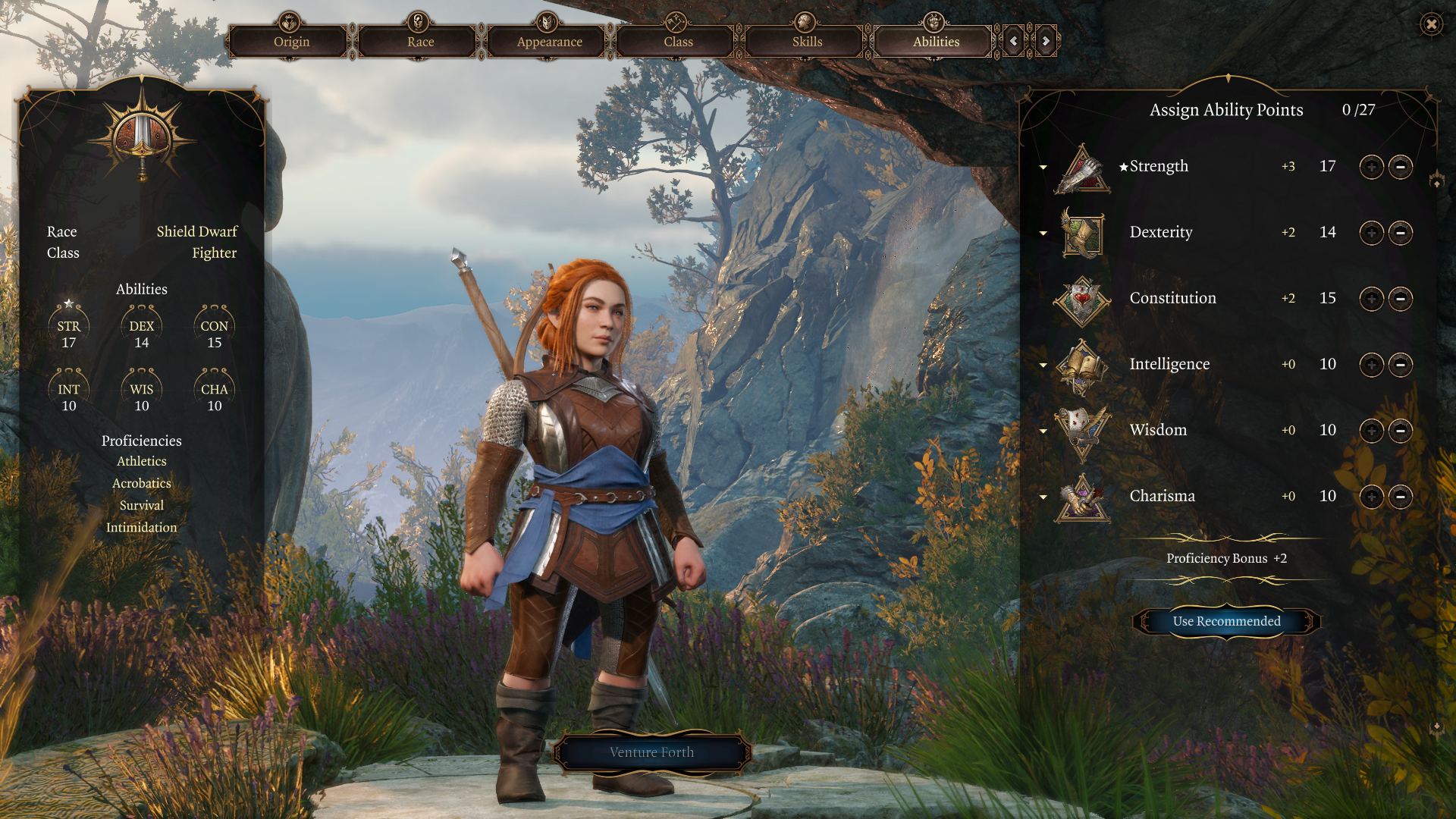 They’ve been mentioned in more or less every section of this guide because they are the most fundamental part of your character, and the system everyone even vaguely aware of D&D will know of. Strength, Dexterity, Constitution, Wisdom, Intelligence, Charisma are the numbers that make up the very essence of your character.

Baldur’s Gate 3 uses the point-buy system, which means you’ll have 27 points to spend on all of your abilities. The lowest each score can be is 8 and the highest by point-buy alone is 15. But if you’ve been paying attention, you’ll know that the selected race can improve these ability scores beyond 15. The game will also helpfully recommend the ability scores to use in case you don’t want to fiddle with the numbers yourself.

If you do want to do so, you’ll need to remember what abilities are important to your character, and what proficiencies you’ve selected on the skills. Mousing over the abilities here, and the skills on their dedicated page will explain their usefulness so you don’t have to memorise them all to select them.

One of the great benefits of character creation in Baldur’s Gate 3 is that you can jump back and forth between the different pages without the game erasing your changes or forgetting what you’re doing.

So while you get the ropes of the character creator feel free to change your mind, experiment and see what the end result looks like, you can always change it back before you start. Good luck, and be sure to gather your party before venturing forth!