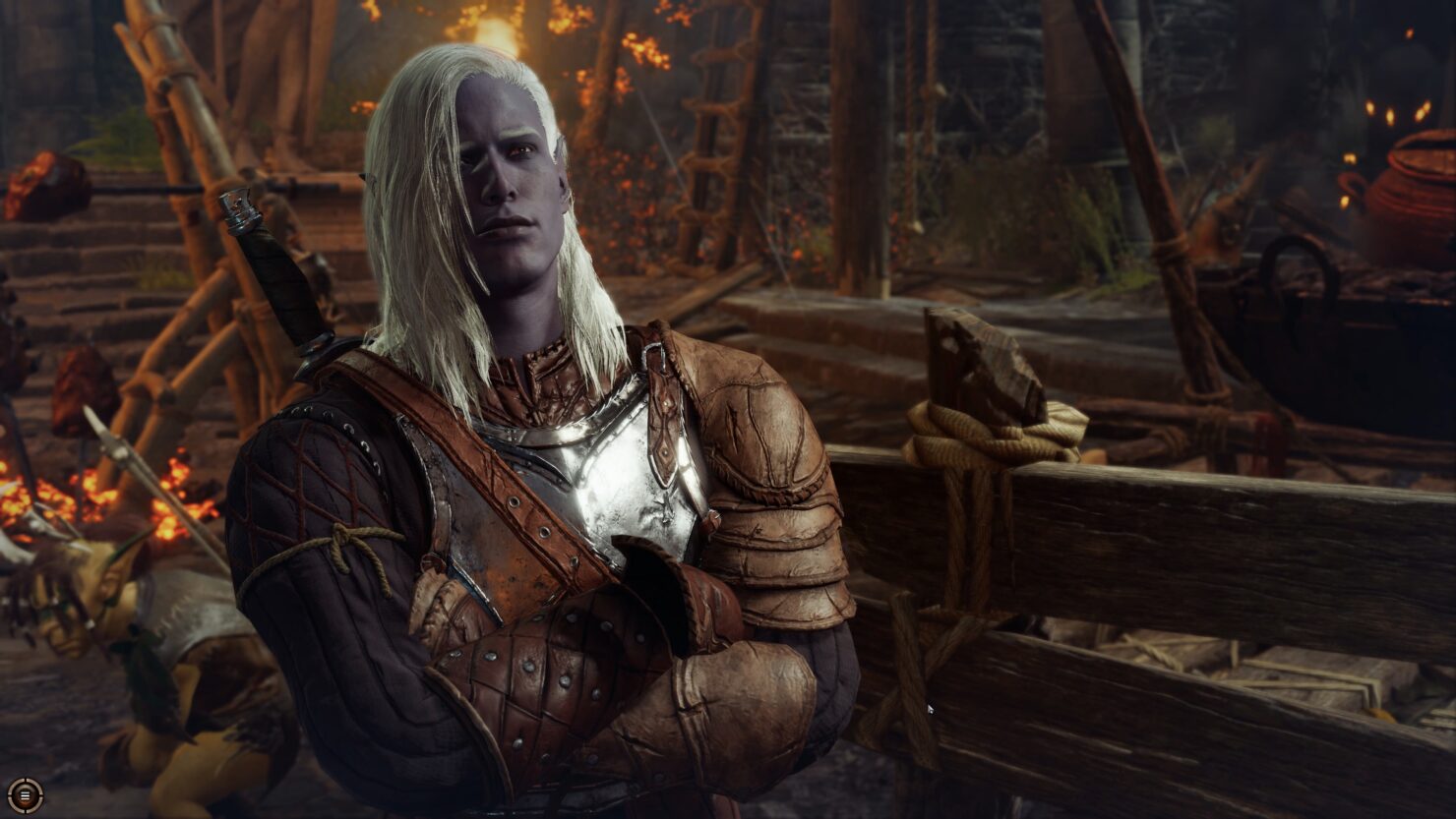 Baldur’s Gate 3 is a vast game, even in early access. It has got dozens of different systems, either lifted directly from, or inspired by Dungeons and Dragons 5th Edition, and it can be more than a little overwhelming. For players that have never had the chance to play a good old game of D&D, or never dipped their toe in Larian’s last video game, Divinity: Original Sin and its sequel this can be even harder, but the subtle and less subtle differences between the lot of them mean everyone will feel initially out of place.

Whether you’re a level 20 Bard of Valor in D&D or just got Lohse to level 20 in Divinity, here’s a rundown of some of the most useful tips and tricks to know at the very beginning of the game.

Try Not To Get Distracted By The Class Wars 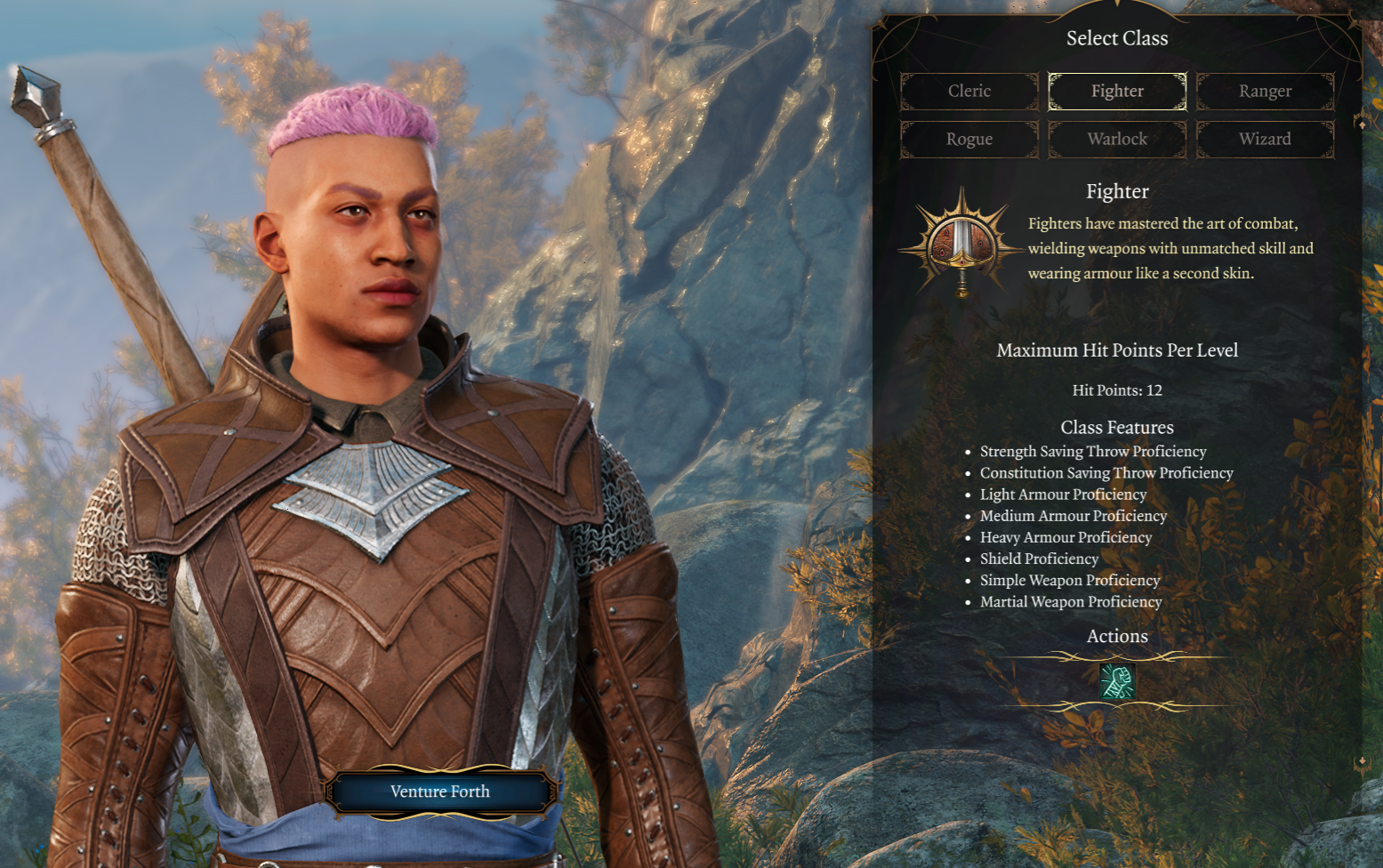 Sure, the world might be in serious trouble right now and the richest 1% might have the equivalent of the poorest 50% combined, but you don’t need to worry about that here. And you also don’t have to worry too much about starting class in the game either.

That’s not to say that each class is basically the same, because they’re not. And it's not to say that you can easily go and pick a new class mid-game if you want, because you can’t. But whatever call you pick, from warrior to wizard, you’ll never feel underpowered as long as you follow the basic guidelines. Each race and class fit together differently, but it isn’t impossible to make a combination work, just make sure you have the most points in the most important attributes when you create your character. After that, the game will give you some choices as you level up, helping craft a truly unique character that has their own role and position on the battlefield, no matter what they are.

So instead of picking the “best class”, choose whichever one strikes your fancy. Make the character you want, whether it be a sadistic elven warlock or hammer swinging dwarven cleric. Like in D&D, creating the character should be a fun chance to explore your options and indulge in the possibilities, not memorise a spreadsheet. 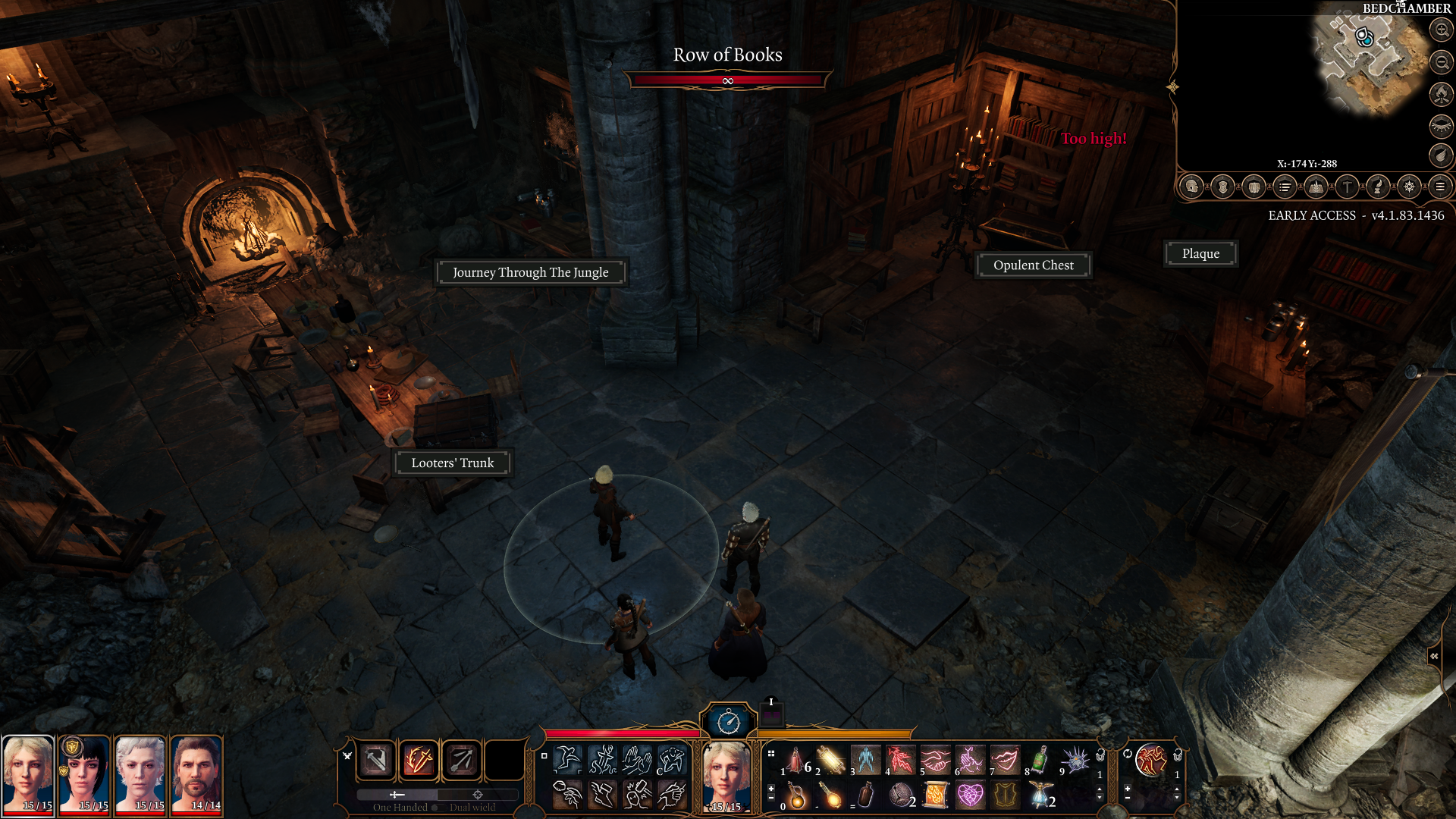 If you’ve played either Divinity Original Sin or Dungeons and Dragons, this one shouldn’t be much of a surprise to you. Each dungeon you delve into or abandoned home you explore in Baldur’s Gate 3 will be filled with boxes, shelves and secrets that are just waiting for you to loot them.

And you can find some incredibly useful items tucked away if you spend a few minutes making sure each corpse and crate are thoroughly turned over. From scrolls that can change the tide of a battle, to shiny trinkets worth plenty of coin, and even rarer goodies. Some items are fixed, but most are randomly generated so even if you’re playing through more than once, it's worth backtracking and taking the wrong corridor to find a few other locations to loot.

Holding down the ‘alt’ key will highlight items in the area you can interact with, but it's also worth just letting your mouse guide over the incredibly detailed world, in case there’s something hidden in the murk of the dungeon or the undergrowth of the forest.

While overlap can be inevitable, making sure your companions are as different as possible gives you the best chance of survival in Baldur’s Gate 3. While a party of four battle-hardened fighters might look intimidating, they’ll not fare so well against a squad of wizards and archers.

This is really important and not just because of the obvious tactical advantage that diversity brings. In your party, you’ll want to try and make sure that you have a selection of skills that can help outside of the battlefield to. Investigation and Perception can save you from traps and dangers in the dungeons. Religion, Arcana, and History can all help unlock hidden secrets, and high Charisma skills like Persuasion and Deception can get you out of a dicey situation without having to murder your way through a whole Druid’s Grove.

Making sure that your party has at least some balance across the different fields of play, in and outside of the scrap, means you’ll find a lot more on your adventure, and survive for longer too. 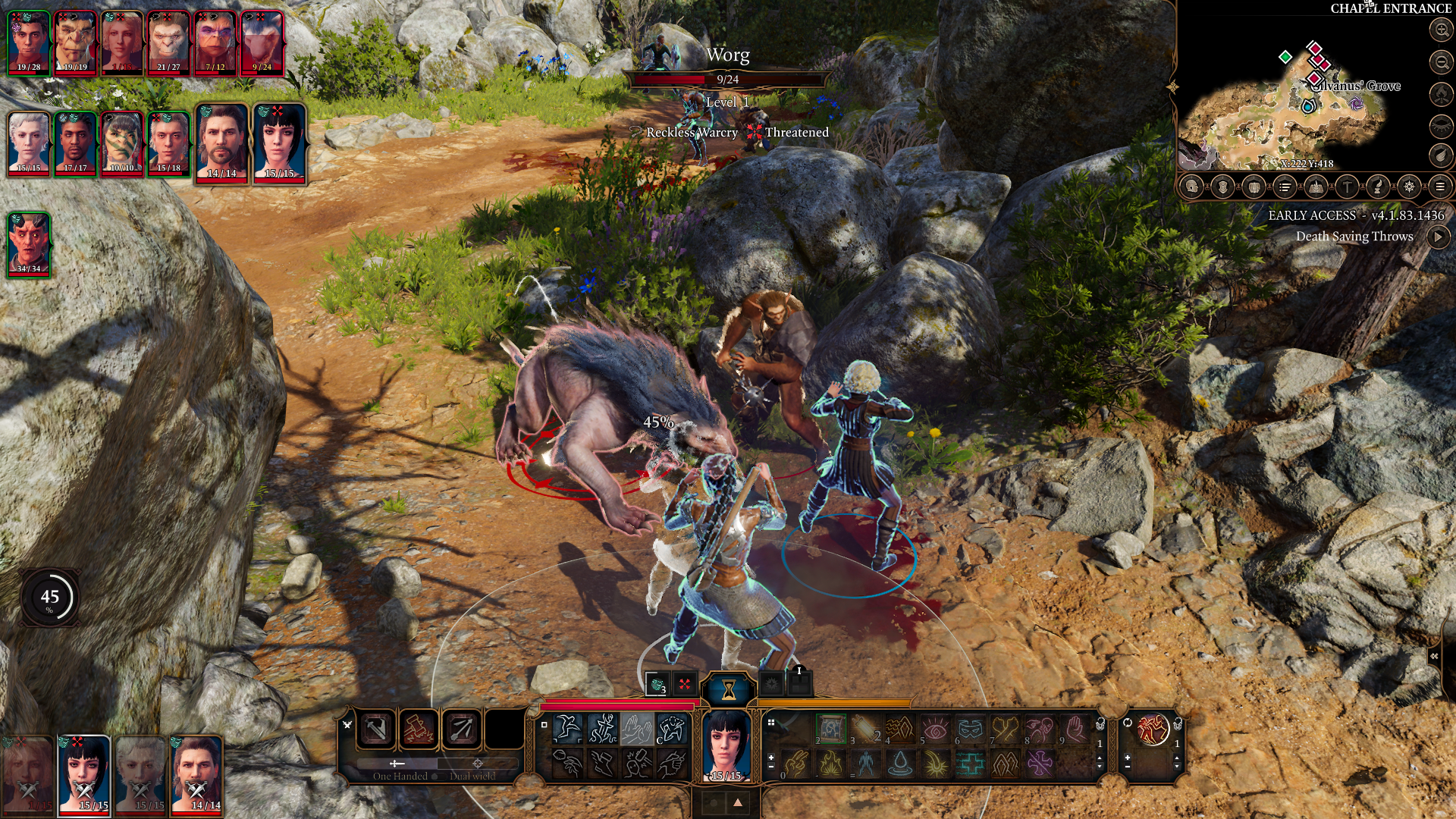 This is a tip for everyone, but more particularly for those that are more used to pen and paper than mouse and keyboard. In Dungeons and Dragons fights might be lost, player characters might die, but in the end, the DM will find a way to continue the story. If you lose in Baldur’s Gate 3, you’re dead. That’s it.

While there is an autosave feature, it's unreliable at best. It's a good signal that a large fight is on the horizon when you spot the game save itself, but there are far more deadly encounters than just the bosses.

It is a good idea to save after every fight, and every successful dice roll. If you’re looking to make a perfect run, you’ll probably want to save before most conversations and interactions as well, but Baldur’s Gate 3 is designed with failure in mind. So the reason you should save after a success is that there is nothing worse than getting a lucky roll, dying in the next room, and failing that roll on the next attempt.

Save often and avoid that disappointment. 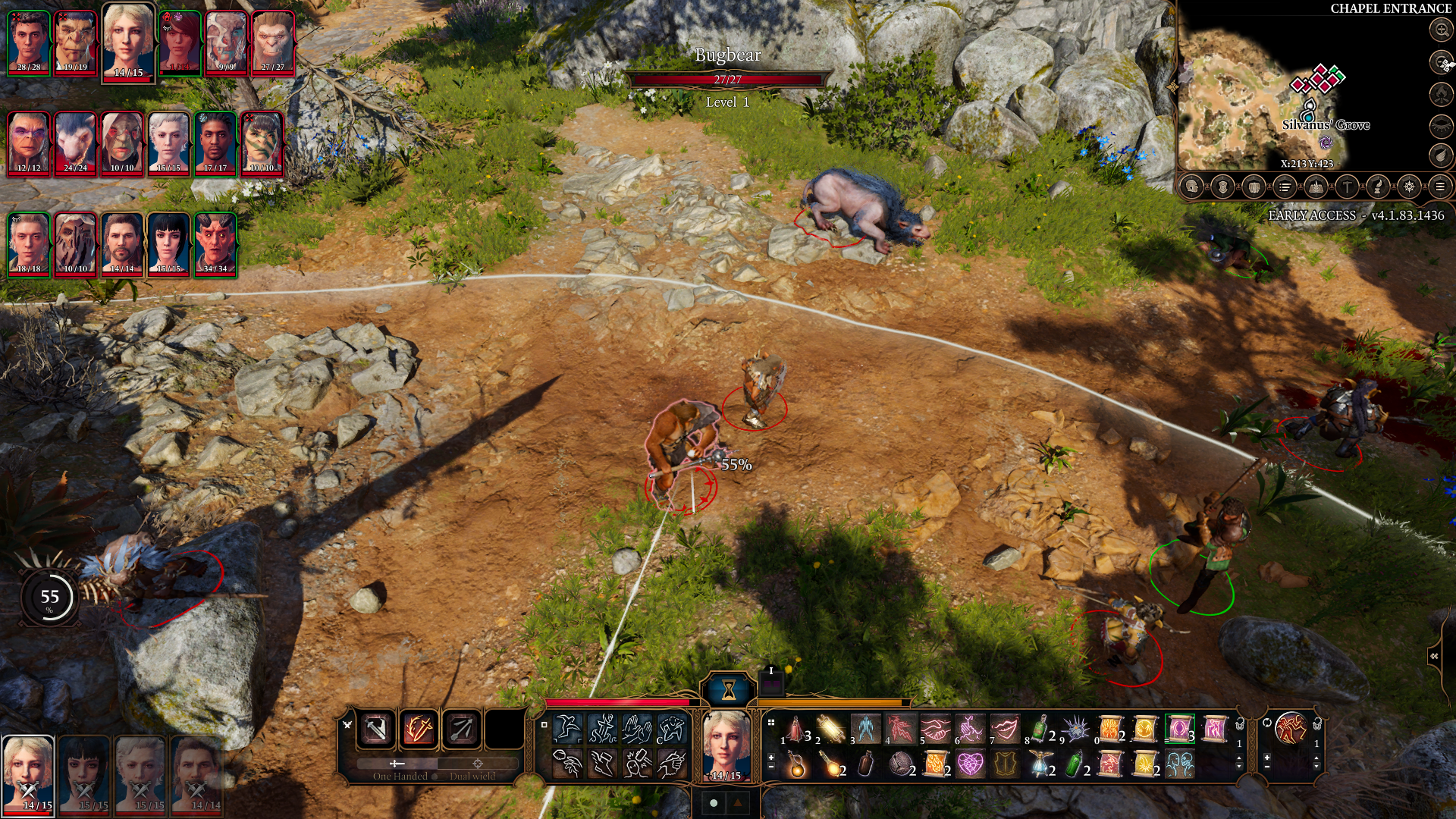 Baldur’s Gate 3, as mentioned earlier, based on Dungeons and Dragons. The famous tabletop roleplaying game allows players to really let their imaginations run wild because whatever you can think of is possible, as long as the DM allows it.

Baldur’s Gate 3 tries to do the same and has so many overlapping systems that you can pull off some incredibly imaginative and often hilarious hijinks if you just try. Not everything will succeed, either because it doesn’t quite work the way you expected it to, or because the dice weren’t on your side. But there is so much experimentation to be had in Baldur’s Gate 3 beyond casting the same spell and swinging the sword. It's up to you to discover what nonsense the game will let you get away with, but consider this a bonus tip and try shoving everyone and everything you encounter.

With these tips in mind, you're ready to go out there and enjoy the Early Access world of Baldur's Gate. If you're looking for some advice on how to fight like a hero, you can see our other Baldur's Gate 3 guide that leads you through the combat you'll encounter in Faerun. And keep an eye for more guides coming very soon!