Elden Ring spices up the formula originally introduced by Demon's Souls in a lot of different ways, without doing away with everything that made the Souls games so engaging.

The class system seen in previous games developed by From Software returns in Elden Ring, and it works in pretty much the same way. Each starting class, called Origin, is geared towards a specific playstyle, but it does not limit players in any way, as the differences are only meaningful at the beginning of the game. Once you start venturing out in the Lands Between, earn Runes, and level up, you will be able to build your character however you want, although you may have an easier time with a specific build depending on the attribute distribution of your starting class.

Like in previous games by From Software, and pretty much every role-playing game out there, the attributes determine what a character is good at. They are Vigor, Mind, Endurance, Strength, Dexterity, Intelligence, Faith, and Arcane.

Attributes can be increased after meeting Melina for the first time while resting at Sites of Graces. By investing increasing amounts of Runes, you can level up your character and increase each attribute by one point per level, allowing you to create all sorts of builds without being limited by the Origin selected at the start of the game. 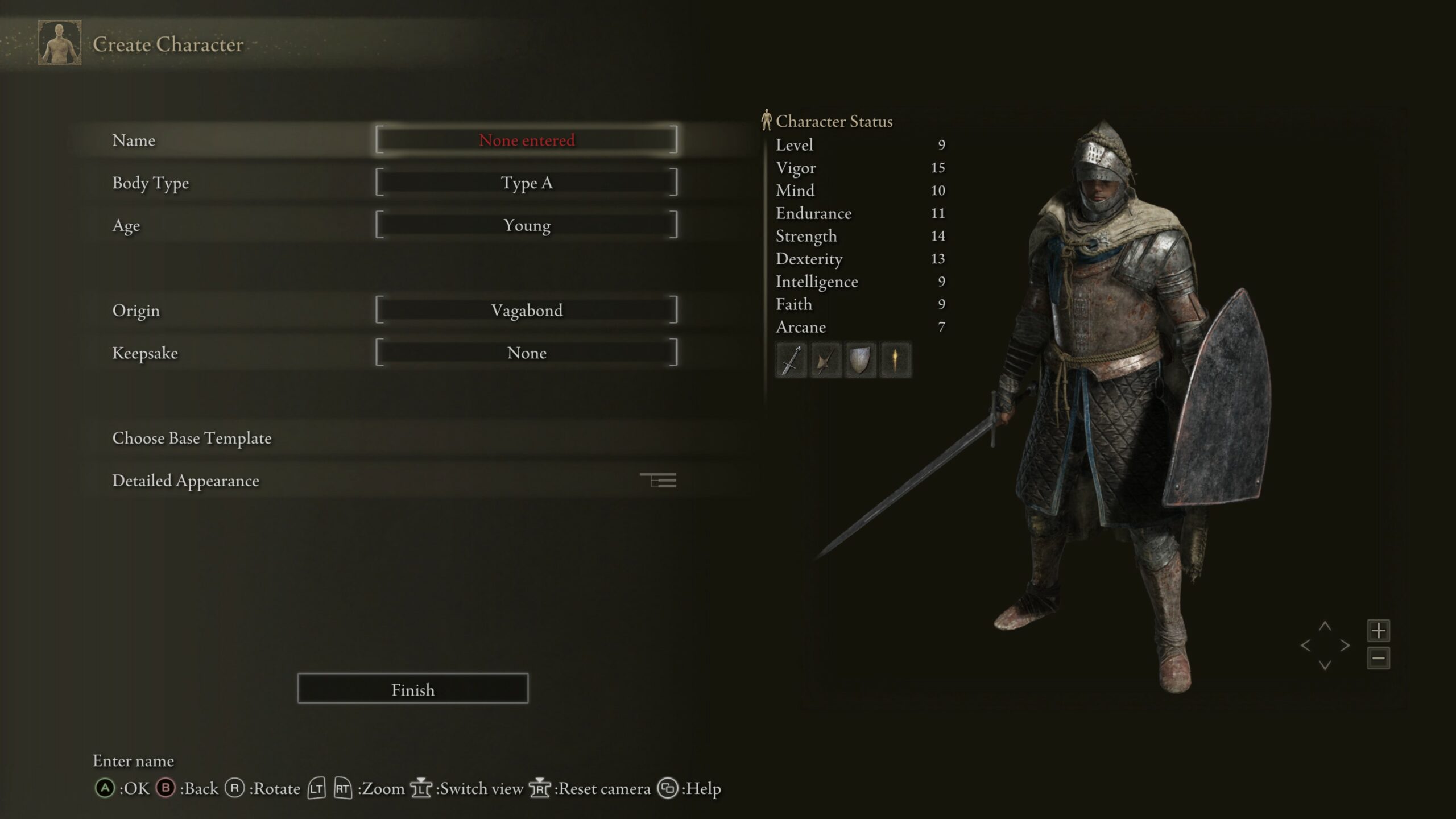 The Vagabond is an all-rounder Origin that, while geared towards melee-focused playstyles, requires minimal effort to use magic thanks to decent Faith and Intelligence stats, which both start at 9. This unique trait makes the Vagabond a good starting point for making hybrid builds that can use magic and physical attacks decently without specializing in either. 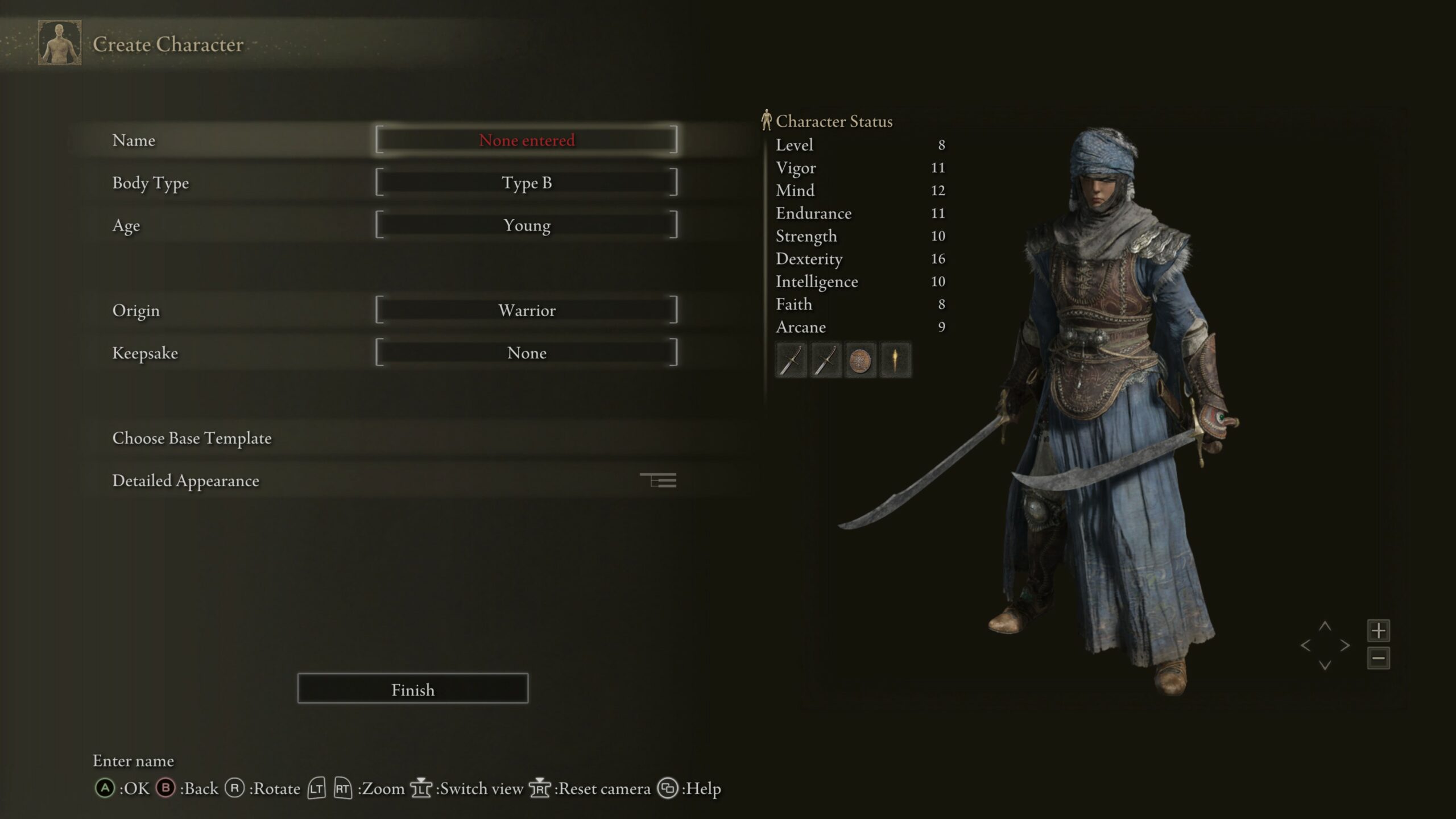 The Warrior is the Origin with the highest starting Dexterity in Elden Ring, making it the one to choose if you're thinking about making a Dexterity-focused build. The Warrior class also starts quite strong, being able to dual-wield Scimitars right from the get-go to unleash some powerful attacks that can make the first few fights easier. The starting Intelligence value, 10, also makes it easy for this Origin to access Sorcery spells with minimal investment. 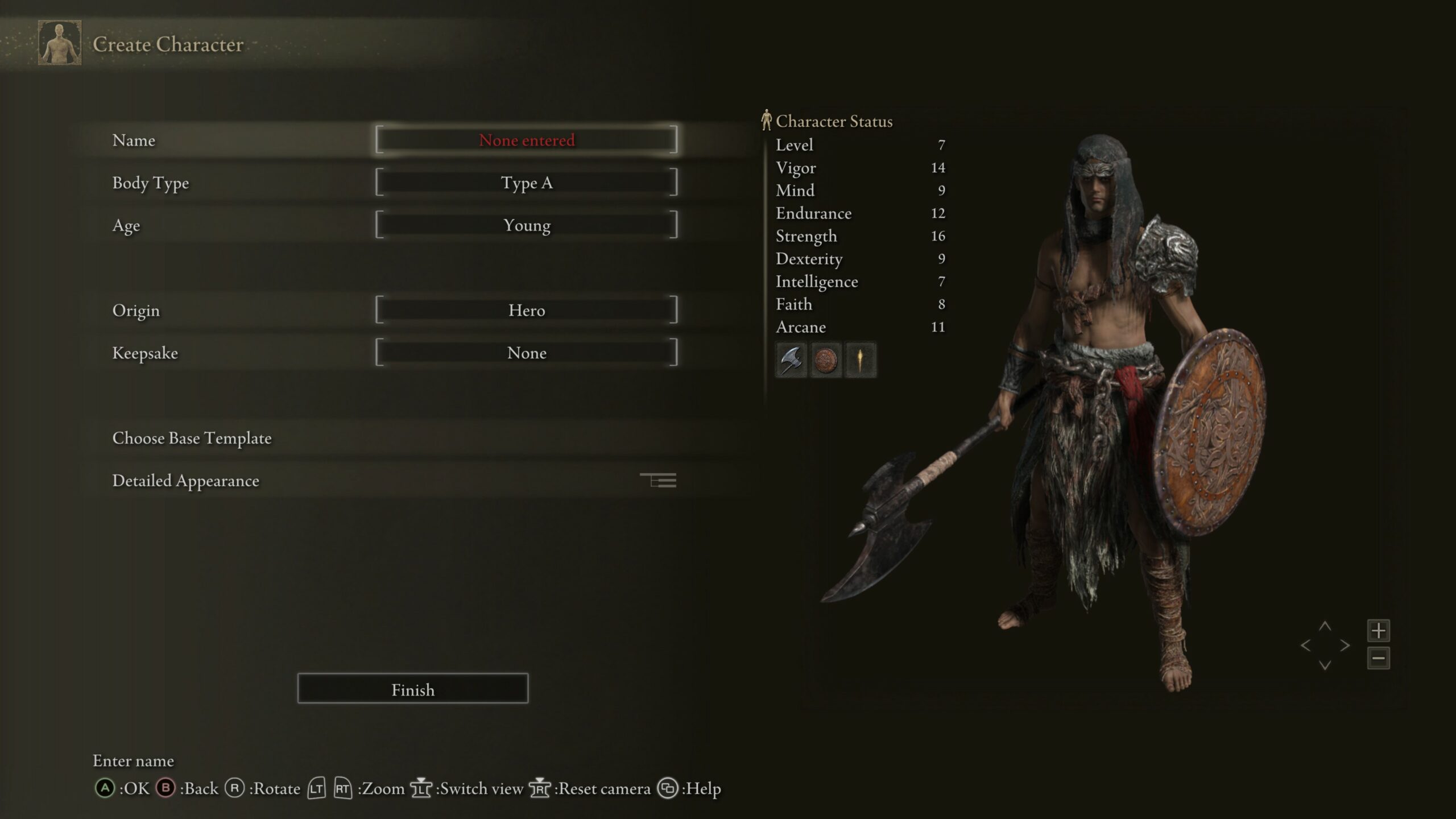 The Hero is the Origin to pick if you're looking into making a Strength build, as it comes with the highest starting Strength value of all Origins, 16. Dexterity, Intelligence, and Faith are quite low, on the other hand, so you will need to level up these attributes considerably to make the Hero a little more versatile. 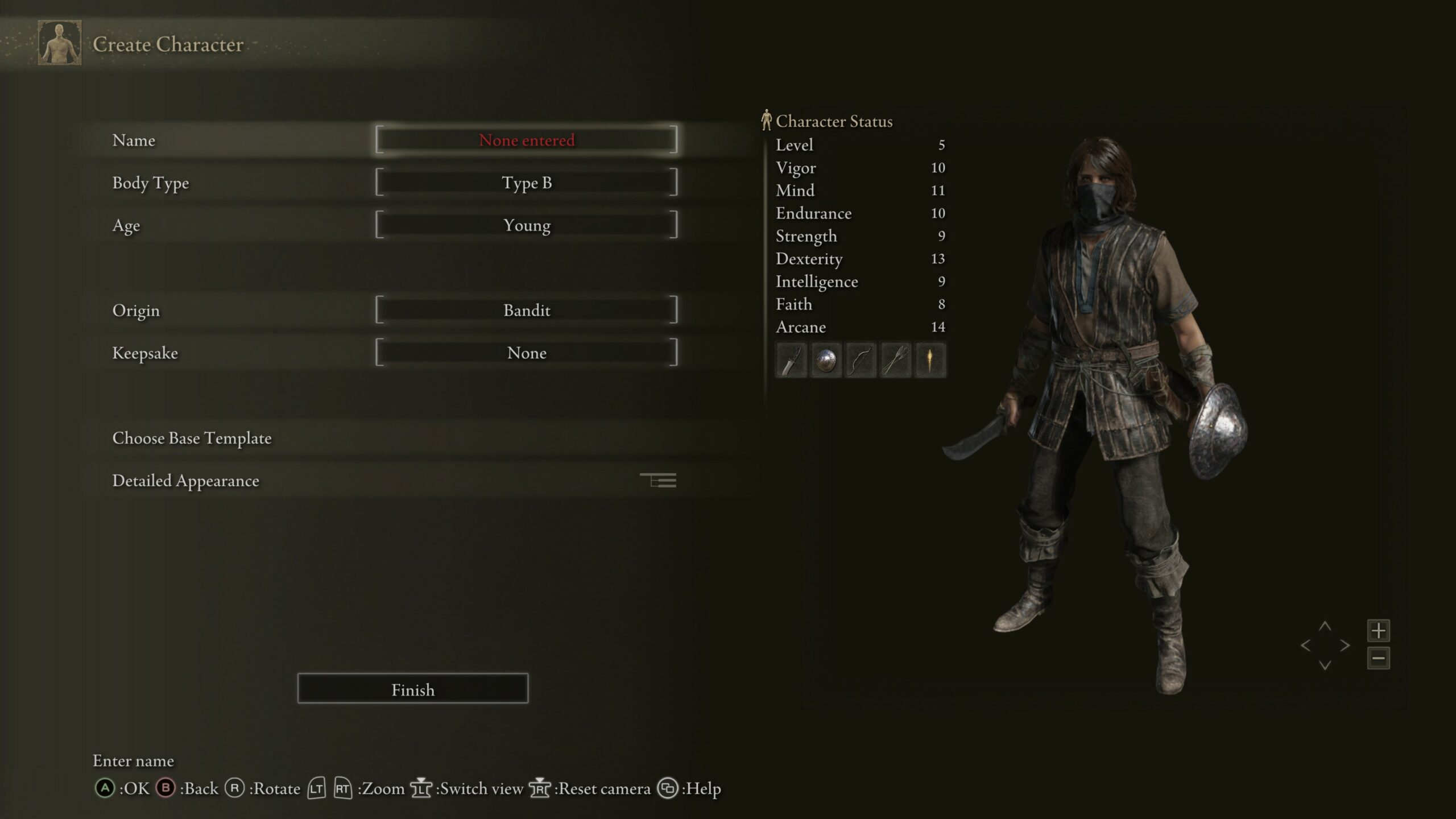 The Bandit is a fascinating Origin that is best picked by those planning to use long-range weapons like bows or to deal with most enemies by using stealth. The Origin has average stats all around, except for Dexterity and Arcane, so it is still possible to use it as the base for both Dexterity and magic-focused build. 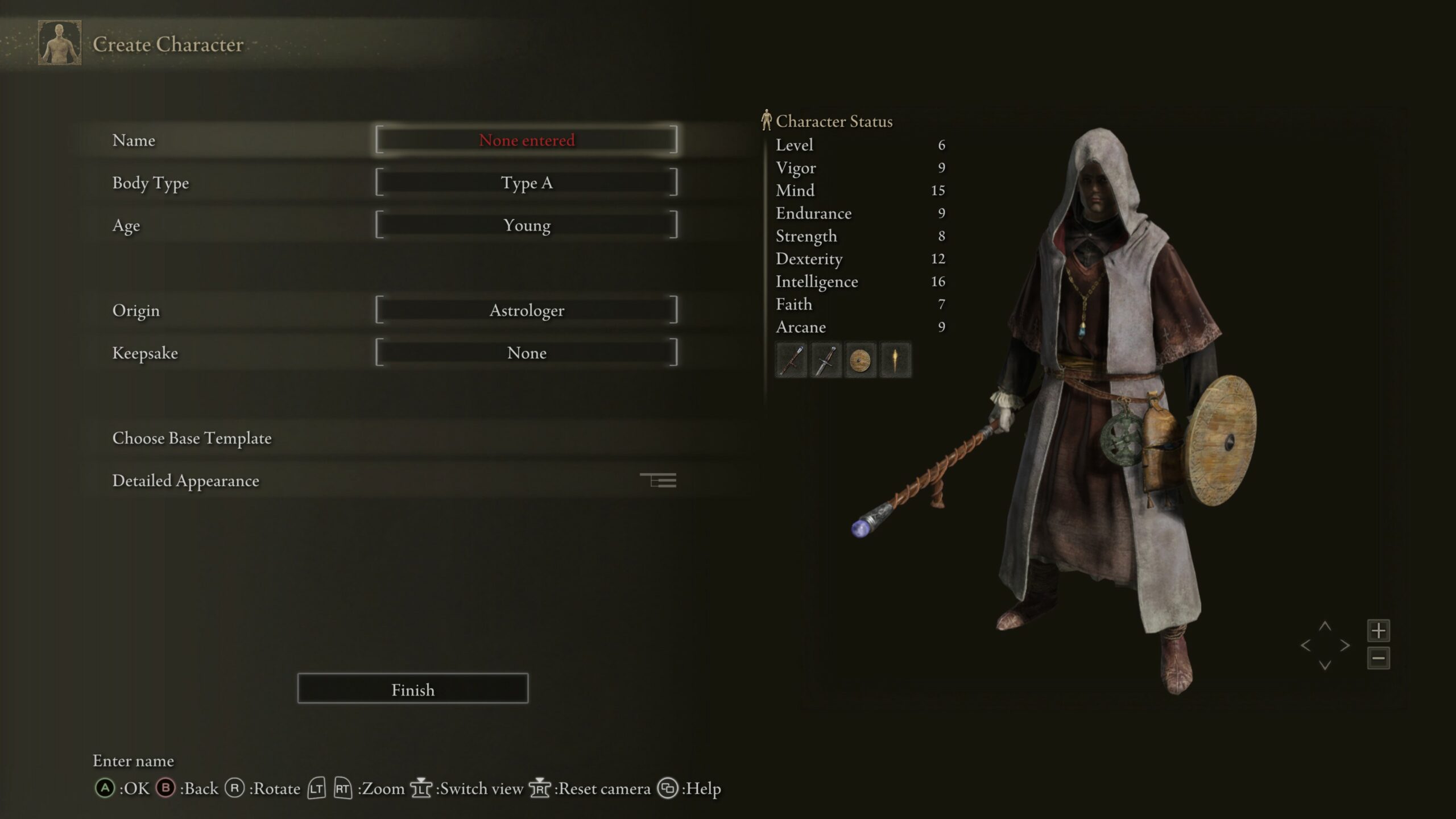 The Astrologer Origin is the best one to pick for Sorcery-focused builds, thanks to its high starting Intelligence and Arcane attributes. The Origin also starts with a decent selection of offensive spells, making it quite powerful at the beginning of the game with the proper FP management. 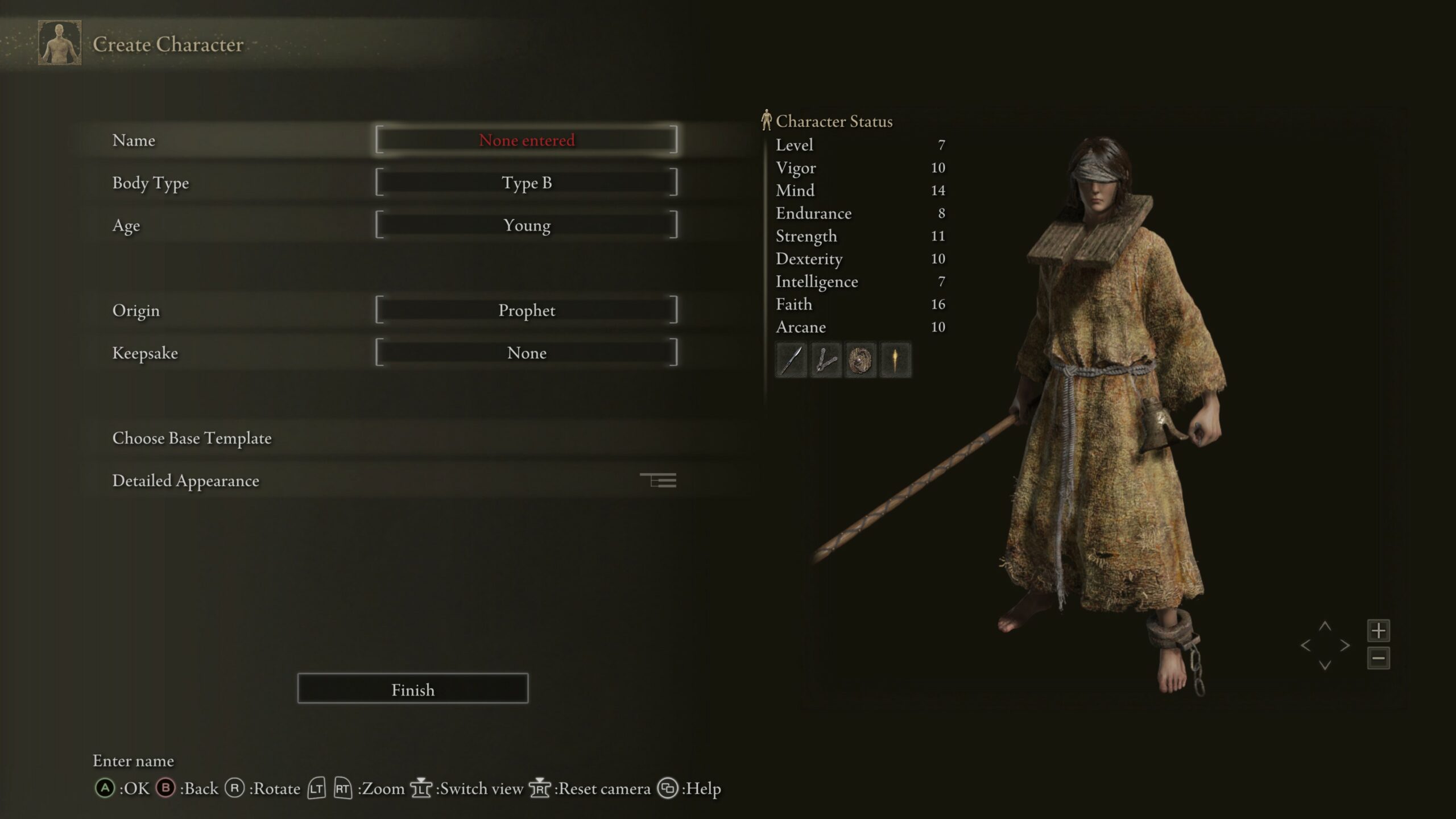 The Prophet is the Origin on the opposite side of the magic spectrum in Elden Ring, as it prioritizes Faith instead of Intelligence, which gives easy access to both offensive and supportive  Incantations. The Prophet is also better at physical combat than the Astrologer, but not by a whole lot, so you will still rely on magic quite a bit. 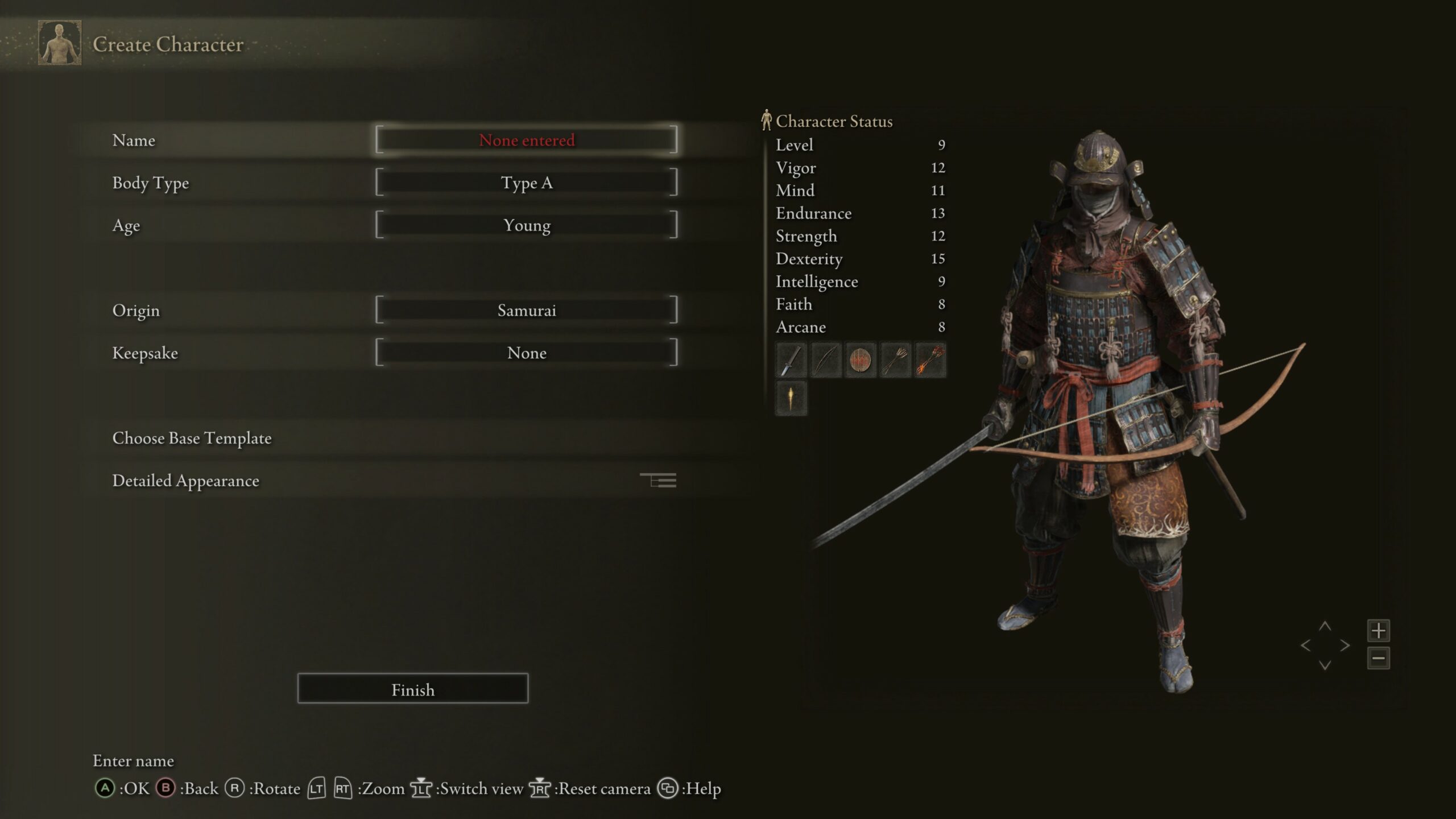 The Samurai is another very unique Origin that resembles the Vagabond but is more focused on Dexterity rather than Strength. The Samurai may lack in survivability due to the low starting Vigor. Still, it makes up for it with versatility, as it starts with a Long Bow for long-range attacks and a Katana for powerful and quick melee attacks. 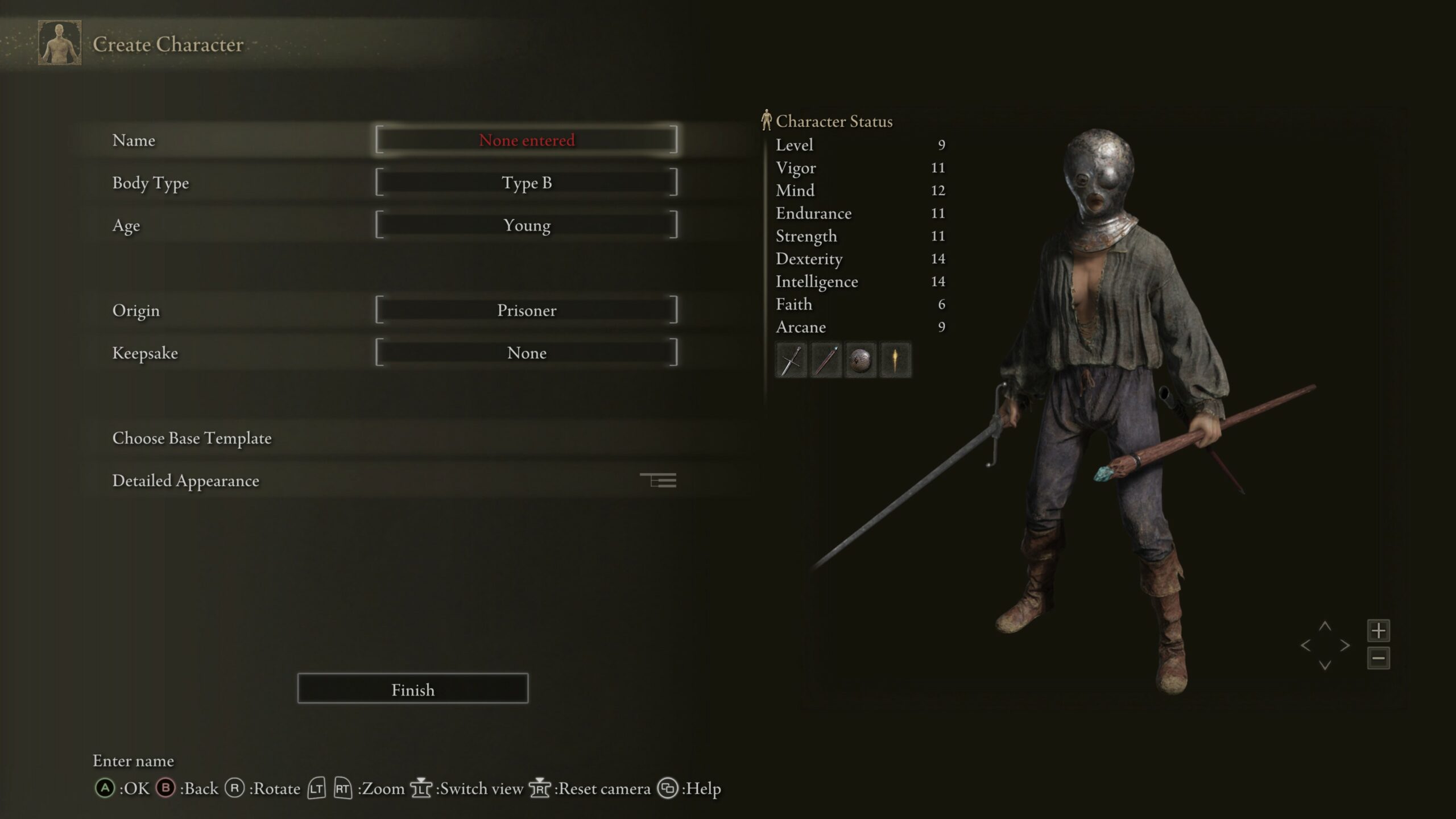 The Prisoner is somewhat of an advanced Origin. It starts with some underwhelming stats, except Dexterity and Intelligence, which grant the Origin tons of versatility later on. As such, the Prisoner is a good choice for an Origin only for expert Souls players who are not afraid of dealing with hardships at the start of the game to have an easier time later on. 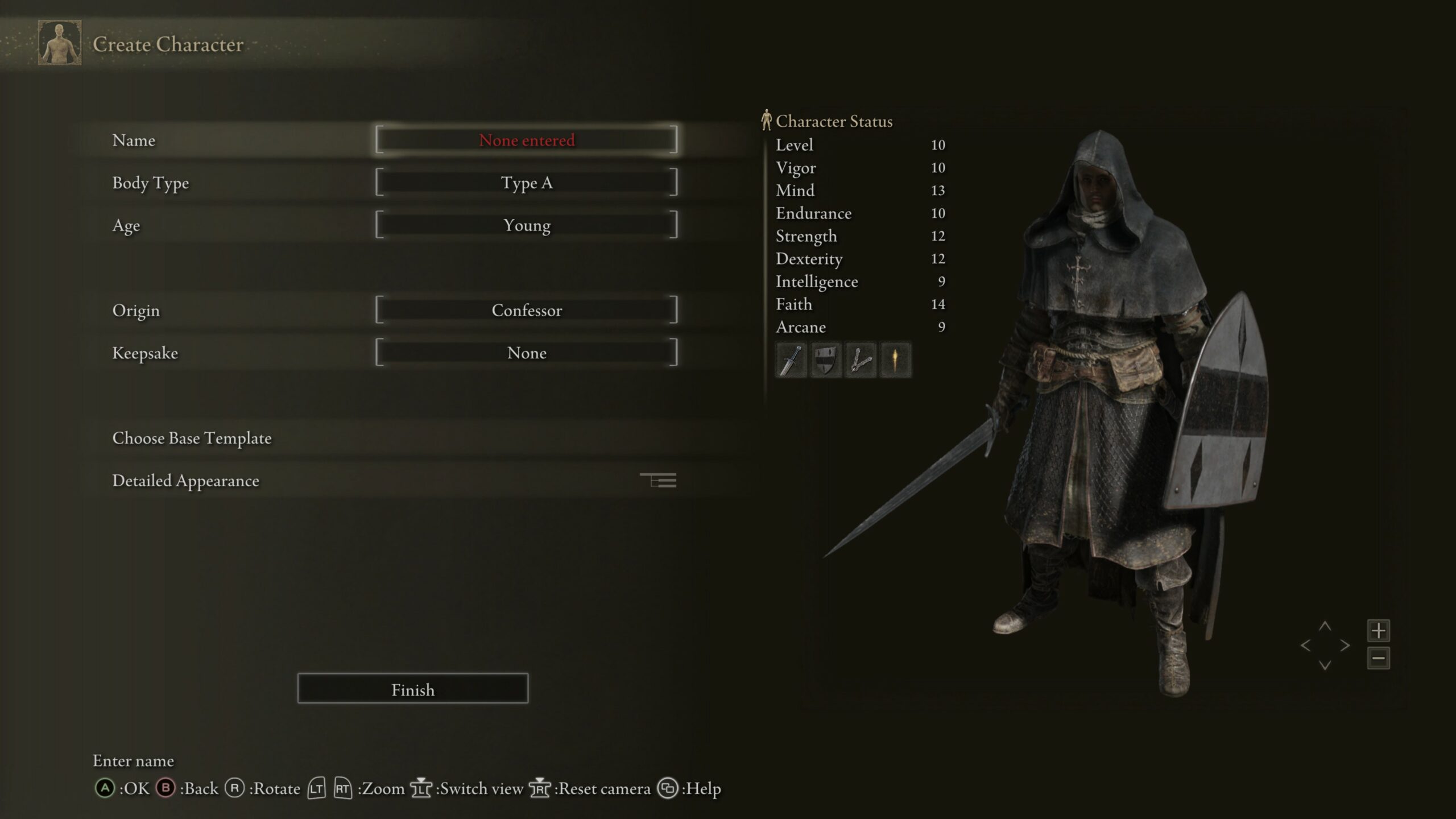 The Confessor is a great Origin to pick for beginners since it starts with gear that grants excellent protection (at the cost of equipment load), a nice selection of Incantations, and decent melee capabilities. This combination of traits can make the beginning of the game much easier for newcomers and players who are not used to the unforgiving experience of the Souls series. 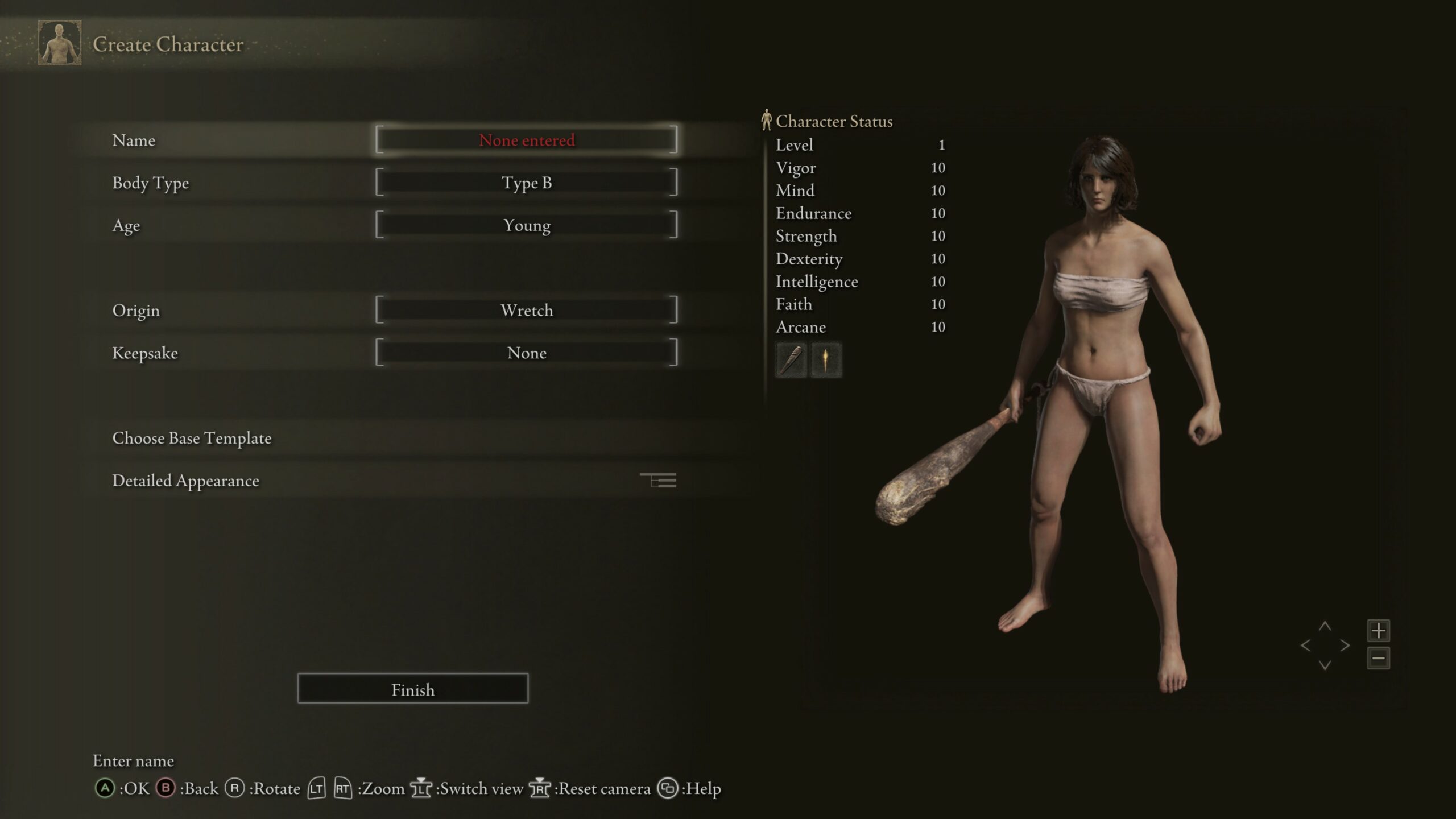 The Wretch is a blank slate, starting at level 1 and with all attributes at 10, with only a weak club as gear. This is the Origin that only expert players should pick, as it makes the start of the game incredibly difficult, and messing up stat distribution can create a very unbalanced character that could have trouble dealing with the dangers lurking behind every corner of the Lands Between.