The AYANEO Next was announced at CES 2022, though it won't feature the rumored Ryzen 6000U APU. The straightforward reason was explained by CEO Arthur Zhang in a letter to customers.

I know many of you are expecting the AYANEO NEXT to be powered by an AMD 6000 series APU, but I may need to disabuse some of you of that notion before the launch.
My definition of NEXT is that I want it to be available to gamers as soon as possible, without having to wait more than six months. AMD's 6000 series APUs will be released soon and, not surprisingly, availability may take until the end of the year. It's not our intention to release the NEXT and then make people wait until the end of the year to get their hands on the device, so the APU in the NEXT is not a 6000 series APU, but it's still the first APU on a Windows handheld that will bring a lot of power to our gaming experience.

The lack of availability early in the year forced the company to use the AMD Ryzen 7 5800U instead for the AYANEO Next. Still, this new edition of the handheld console does come with several new features. For example, it is said to be the first console to use hall effect sensors on both joysticks and triggers. The magnetism should allow for more accurate and durable controllers while helping solve the drift issue. The joysticks are also replaceable, just like in high-end game controllers.

The left and right grips are also reportedly equipped with dual X-axis linear motors, which can provide different directions and different strengths of vibration according to the game scene.

The AYANEO Next also features the latest technologies for wireless connectivity. It is the first to use the new AMD Wi-Fi 6E solution "RZ608", which brings a brand new 6GHz frequency band with a maximum theoretical rate of up to 3.6 Gbps. Compared with Wi-Fi 6, it has increased by 1200 Mbps, and has stronger wireless transmission capabilities and lower Delay. Bluetooth 5.2 also supports a faster, more stable, and larger range of wireless connection experience.

There's also a biometric authentication feature, thanks to the fingerprint unlock module added to the power button.

The official website provides some early benchmarks made in the laboratory, too. The Witcher 3 can run at 27 frames per second on High settings or 41 frames per second on Medium settings, while Cyberpunk 2077 ranges from 23.1 FPS (High) to 38.2 FPS (Low). Forza Horizon 5 seems to fare better, delivering 42.3 FPS on High settings or 67.1 FPS on Medium settings. 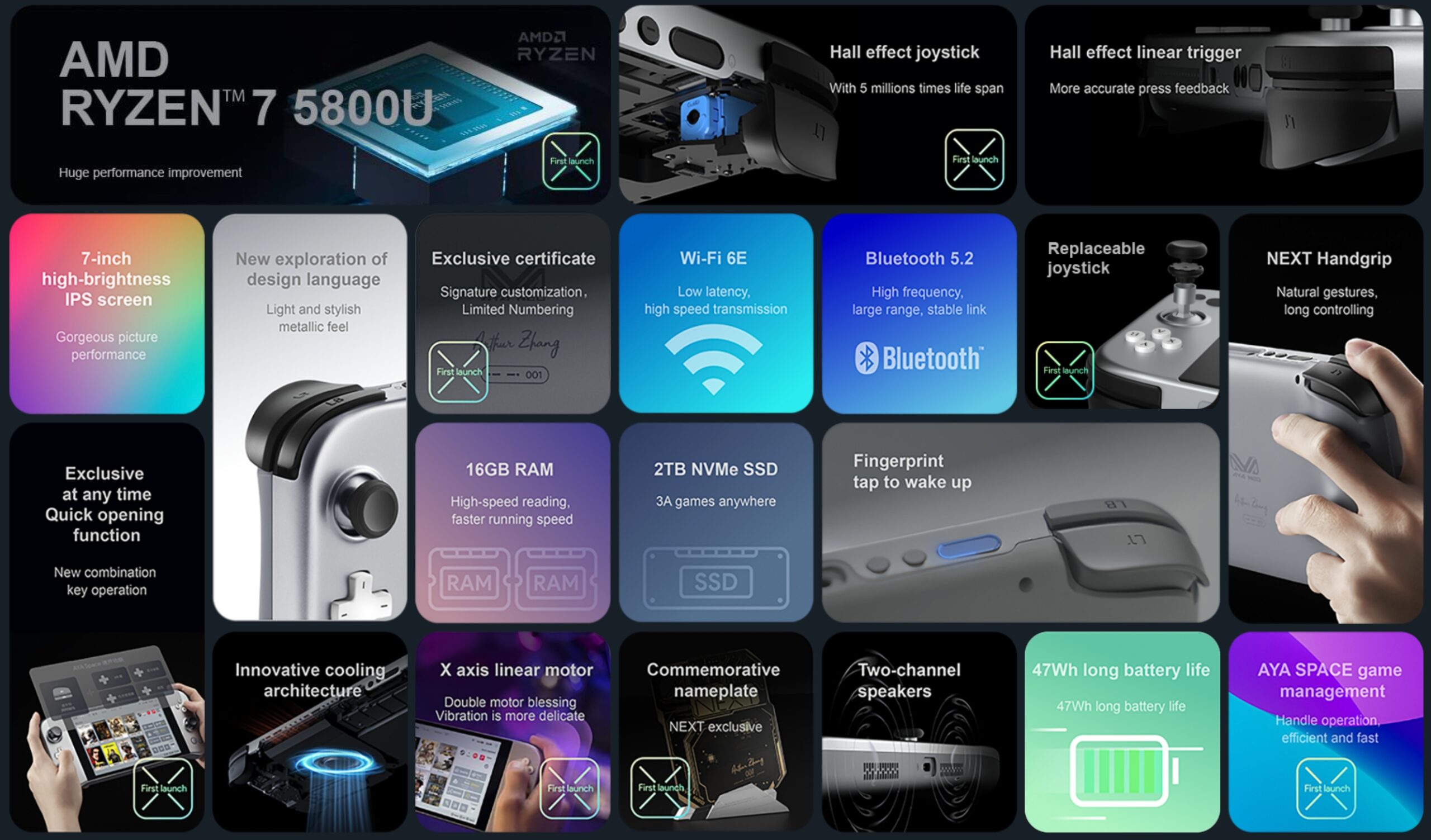 The AYANEO Next will be available in three different editions, with the more expensive featuring 32GB of RAM. Liliputing has an overview of the different prices and specs.