ASUS's high-performance and workstation grade, X99-E WS motherboard has been unveiled prior to its launch tomorrow. The ASUS X99-E WS is a workstation motherboard featuring high quality components which ensure stability plus a neat black and silver color scheme which looks amazing on the new motherboard. In addition to the ASUS X99-WS, the ROG Rampage V Extreme and ASUS X99 Deluxe motherboards have also been leaked. 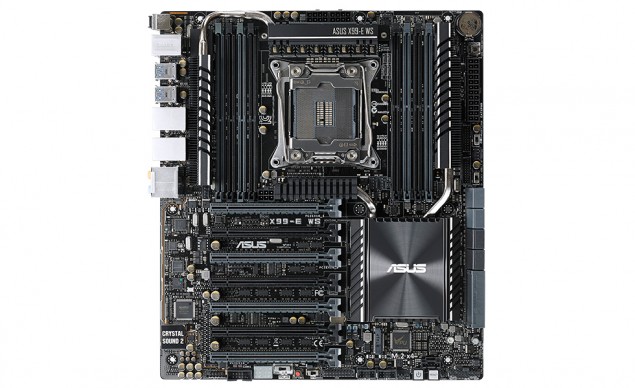 Images are courtesy of Brightsideofnews!

The good thing about the new X99 chipset based motherboards is that they are fully compatible with the Xeon E5 lineup of processors. The LGA 2011-3 socket allows support for both Haswell-E and Haswell-EP processor in the new platform family plus featuring DDR4 memory support. There have been several leaks surrounding the Xeon E5-2600 V3 series family and I have a post coming out on the benchmark numbers of the Xeon E5-2669 V 3 processor but before that, let's take a look a the workstation geared X99-E WS from ASUS.

Featuring the LGA 2011-3 socket, the X99-E WS supports both the Haswell-E and Haswell-EP family of CPUs. The board features an 8-Phase DIGI+ II VRM and the socket is powered through dual 8-Pin connectors including the 24-Pin ATX connector. The DiGi+ design on the motherboard includes several high-quality components such as the DR.MOS MOSFETs, capacitors with the ability to operate up to 12000 hours, ProCool power connectors and thermal chokes. The socket is surrounded by eight DDR4 DIMM slots (four on each side) which can support up to 128 GB of DDR4 memory with speeds of up to 3300 MHz (O.C). The motherboard has five sets of heatsink which include two for the VRM section and three for the PCH, DIMM Electrical and a heatsink below the socket. Each of the five heatsinks are interconnected via a dense heatpipe and the board makes use of three of them emphasizing on its stability oriented design.

Storage includes 12 SATA 6 Gbps ports and two SATA Express ports. There's also two USB 3.0 headers and two USB 2.0 headers. ASUS has also include their Crystal sound 2 audio engine and EPU technology on the board. A single M.2 SSD connector can be spotted beneath the PCH heatsink. The PCH heatsink itself has a brush metal effect on it with a ASUS logo engraved in the center. Expansion slots include seven PCI-e 3.0 x16 slots which can support 4-Way SLI and Crossfire multi-GPU functionality. A single 6-Pin connector beneath the socket is used to supply additional power to the PCI-e slots when running multiple graphics cards. The Crystal sound 2 chip is isolated to its own PCB indicated by a yellow line. A few Power On/Off, Reset switches can be found at the bottom of the board.

The I/O panel includes 10 USB 3.0 ports, Dual Gigabit Ethernet LAN ports, a 7.1 channel HD audio jack, an E-SATA and Firewire port along with a reset switch and ASUS Connect panel. The MSRP of the board is $519 US which is high but considering this is a workstation board, it is expected. 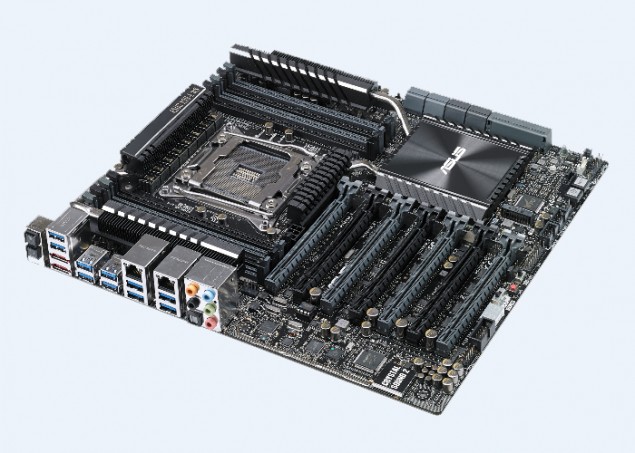