My buddy Kevin Owi from OCDrift.com has just revealed the X99 Deluxe motherboard from ASUS which is going to be the company's next generation HEDT offering for the Haswell-E platform. ASUS's X99 Deluxe motherboard comes with their 5-Way Optimization design which includes several new features aimed at the enthusiast users which allows them to get the most performance and stability out of their processors. 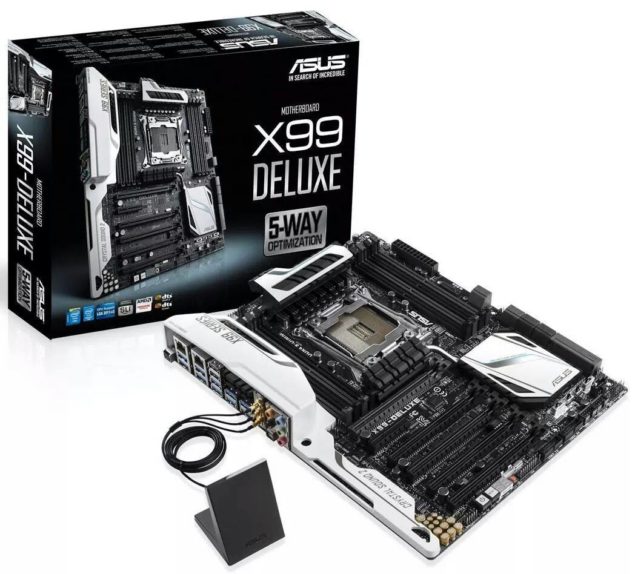 It looks like white and black has become the latest trend for motherboards since there is a huge demand from users for these boards. The ASUS X99 Deluxe comes with just the fine tone of this color scheme with the heat sinks colored white and silver followed by an all black color scheme for the rest of the PCB. The X99 Deluxe will feature a 8 Phase Digi+ VRM design which boasts several quality grade components to ensure superior stability and overclocking performance. The VRM is surrounded by a large heatsink at the back of which, an 8-Pin EPS connector can be found to provide power to the LGA 2011-3 socket. The socket is surrounded by eight DDR4 DIMMs which offer up to 128 GB of memory support with speeds of up to 4 GHz (future DDR4 standard).

For storage, ASUS has featured 10 SATA 6 Gbps and two SATA Express ports on the motherboard along with two USB 3.0 and two USB 2.0 headers. There are a few switches found at the bottom of the PCH heatsink which may be used for BIOS and OC support but we don't have exact details as of yet. The other round of switches which include the Power On/Off, CMOS Reset, Reset and Diagnostic LED are found below the PCI-E slots. Expansion slots include five PCI-e 3.0 x16 and a single PCI-e 3.0 x 4 slot so we can tell that the motherboard has support for 3-Way SLI and Crossfire GPU functionality. The PCH heatsink is interconnected with a separate heatsink that rests above the top most expansion slot with a thermal heatpipe to dissipate load. ASUS's X99 offering includes what the call the latest Crystal Sound 2 audio design with the audio section isolated to its own PCB.

The I/O on the motherboard includes 10 USB 3.0 ports, two USB 2.0 ports, two Gigabit Ethernet LAN ports, a 7.1 channel HD-Audio jack, SPDIF and a ASUS CMOS Reset switch. The motherboard also comes with WiFi AC LAN wire less connectivity and the features antenna ports at the I/O panel which is bundled with a ASUS WiFi stand alone transmitter offering 802.11 A/B/G/N connectivity. Its unknown what price the X99 Deluxe would retail it but we expect around the $350 US range. ASUS also has ROG boards and the X99 WS planned for launch at the Haswell-E launch event on 29th August 2014.