Asus VivoWatch will go on sale on May 8, 2015 and will be sold in Taiwan first, followed by the European market. Now, the first thing that we noticed about VivoWatch was not its affordable price tag, but its ludicrously long battery life, which according to the company’s product page, will last for a period of 10 days. One of the reasons why this might be possible is because the wearable is not running Google’s Android Wear platform. Instead, VivoWatch is running the company’s own Kood operating system.

The surprising thing about the product is that it features a smaller battery pack compared to the company’s Android Wear running ZenWatch. The latter is running a 369 mAh battery (which lasts for two days), while VivoWatch is equipped with a 123 mAh battery. However, when you spend $349 on an Apple Watch, which is designed to give you 19 hours of battery (on passive use), that’s when you know how paramount battery life becomes for the user. 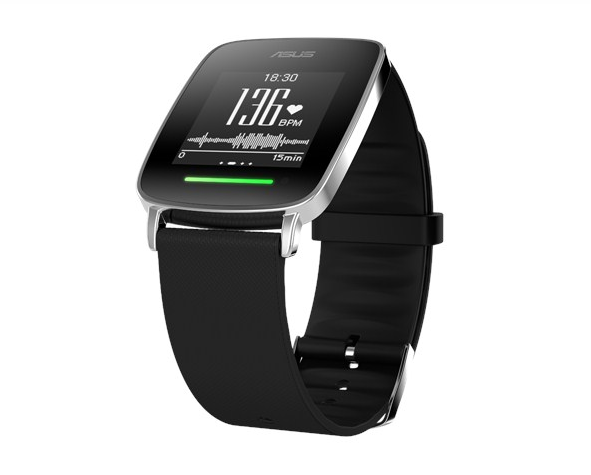 VivoWatch features a 1.28 inch black-and-white touchscreen that takes advantage of Sharp’s memory LCD technology. For those of you who are unaware about this particular technology; when the user starts playing around with the LCD of the wearable, only part of the image moves that is being tapped on, which results in a longer battery life by minimizing pixel movement. Additionally, Asus has taken a different approach with its wearable. While Apple Watch might be incorporated with a volumetrically reduced mobile SoC, VivoWatch is only running a microcontroller unit which has been manufactured by STMicroelectronics N.V. The firmware and Kood platform have been developed by Asus itself.

However, there are some negative aspects of using VivoWatch. For starters, Apple Watch owners will be able to fire up applications from within their wearable, a feature that is void on Asus’ $149 is offering. However, VivoWatch is compatible with both Android (requires Jelly 4.3 or higher) and iOS (requires version 8.1 or higher) devices and will be able to sync data comfortably with smartphones and tablets. That’s not all; since Asus is targeting the fitness eccentric crowd, you can rest assured that the smartwatch will feature a fitness tracker and a heart rate sensor.

Furthermore, the fact that it is $200 cheaper than base model of Apple Watch, we are inclined to say that fitness aficionados will not be required to spend a fortune to monitor their vital stats.