Finally IHS has released the cost breakdown of Apple's latest and very first Apple Watch. The research firm has focused on the 38mm Apple Watch Sport model (cheapest one) and gives a final cost price of $83.70. Cheap, aint it?

Tim Cook warned us during the Apple's earnings call that the cost of Apple devices shared by research firms are nowhere "close to being accurate." While we trust Tim, it is already established that these cost breakdowns don't actually try to give the final cost of the gadget and instead focus purely on component cost - never including how much R&D, marketing and many other similar processes would have costed the company.

It took IHS a little longer but it certainly takes more time to take every component apart and then identify its prices. Display module, as always, is the most expensive coming at $20.50 a piece followed by processing chip costing Cupertino $10.20 a unit. Here is the list of components giving us a glimpse at the final cost of the Watch: 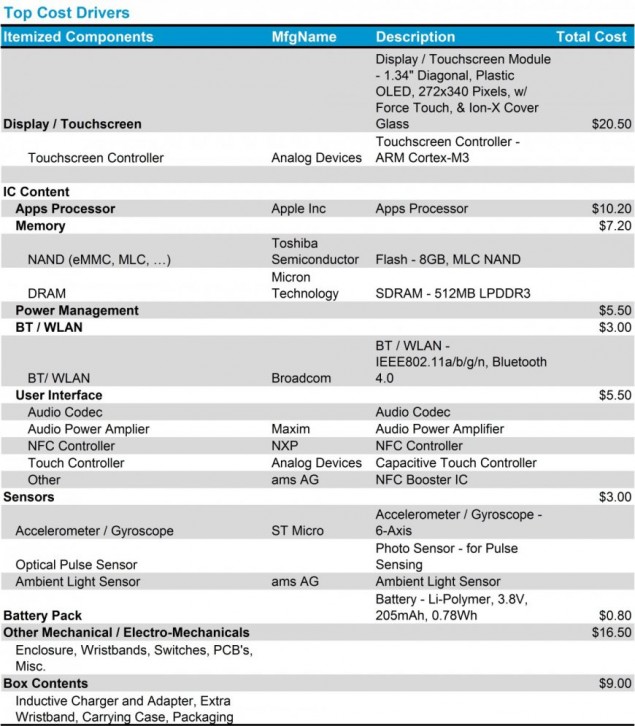 One aspect where IHS seems to be contradicting to what Apple has so far shared is the profit margins. The research firm claims,

However, Luca Maestri, Apple CFO had claimed that the margins on the Watch are actually lower than the company's other products. This could be possibly because of the immense amount on R&D, we suspect.

- For more details, refer to IHS