ASUS has announced a new event known as the 'Pinnacle of Performance' which will be hosted on the 9th of May. While the actual product details are unknown, there is a hint that the newest Intel Alder Lake-HX CPUs and the respective laptops will be involved in the latest products.

ASUS Gears Up For 'The Pinnacle of Performance' Event on 9th May, Can Introduce Fastest Laptops Powered by Intel Alder Lake-HX CPUs

There is a rumor that the new ASUS product line will compose of next-gen premium professional notebooks utilizing the upcoming Alder Lake-HX series of CPUs. The company has already released its ROG and ROG STRIX lineup of laptops based on the Alder Lake-P laptops so it makes sense to push for even higher performance with the new Alder Lake-HX parts The event itself is planned to be live-streamed on the 9th of May at 12:00 PM (EDT).

THE PINNACLE OF PERFORMANCE

Welcome to The Pinnacle of Performance, a virtual launch event from ASUS.
We invite you to witness the full spectrum of new capabilities in the latest ASUS products.

Find out your pinnacle moment and win the chance to be gifted with the exclusive giveaway! 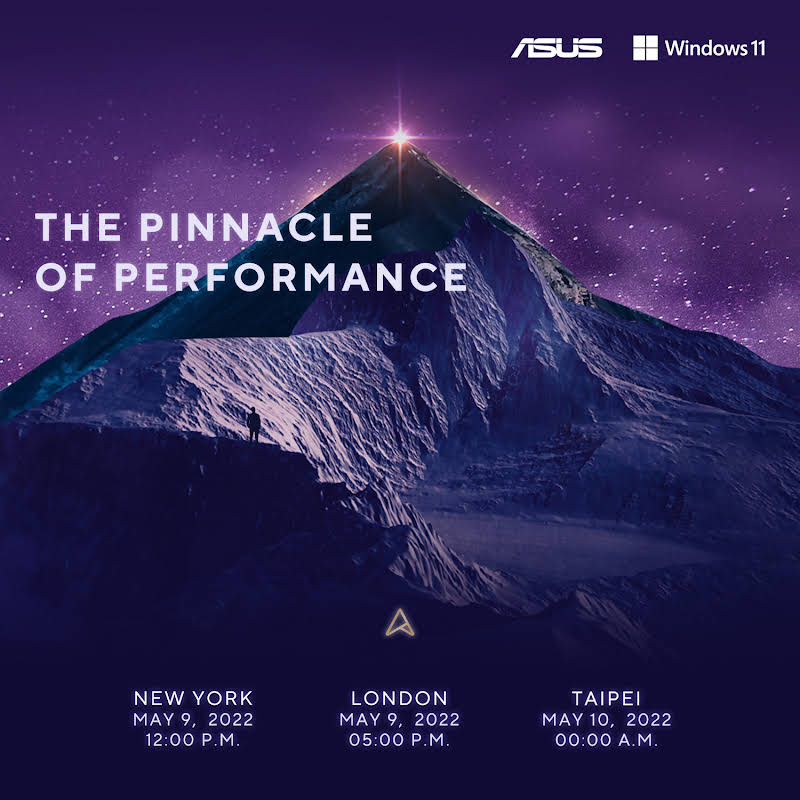 Leaked benchmarks from Geekbench have revealed the specs for Intel's Core i9, Core i7, and Core i5 HX-series processors, showing increased clocks & core counts compared to their predecessors.

The new Alder Lake-HX series processors will be packaged in the BGA format. Several sources claim that the new chips offer optimized voltages so that power is conserved and tuned for maximum performance/efficiency on laptops. Intel's latest CPU series will also provide a higher core and thread count than the existing Core i9-12900HK. With the 12900HK providing a configuration of 14-cores and 20-threads, the new Intel Alder Lake-HX chips will offer a 14% increase in core and a 20% increase in the thread count. The Alder Lake HX series will be faster than the AMD Ryzen 9 6000 APU, the company's fastest mobile chipset. Still, they will also consume much higher power than we have seen with other notable Intel Alder Lake desktop processors.

Several manufacturers including ASUS have mentioned that laptop designs based on Intel's newest mobile chipset are in the works and will be revealed over the next few months. One such company is Dell, which the company is preparing its brand new Precision 7000 series workstation laptops. The laptops feature Intel Alder Lake-HX CPUs and Pro GPUs in Intel Arc & NVIDIA's RTX families.