ASUS at their Computex 2013 conference unveiled the latest ROG Maximus VI Impact motherboard that delivers unprecedented amount of overclocking and performance in a Mini-ITX form factor. 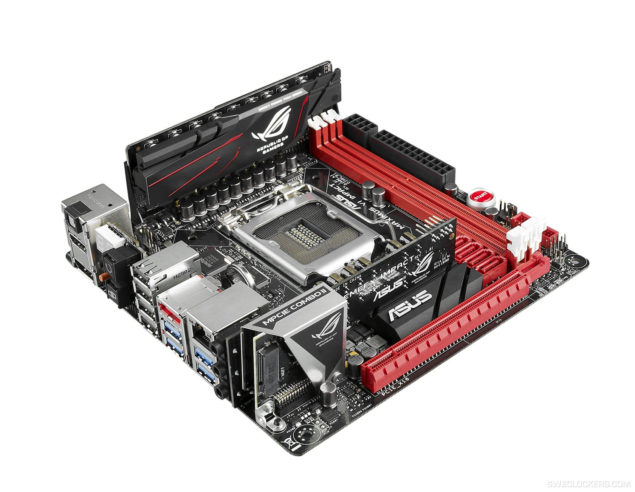 This is the first time that ASUS has launched a Mini-ITX board in its Republic of gamers lineup. The Maximus VI Impact features the LGA 1150 socket and the Z87 express chipset. The motherboard features a right-angled VRM board that comes with a 8+2 Phase Digital PWM and is cooled off by a vertical heatsink with an embedded ROG logo. ASUS went with their flagship red and black color theme for the Impact motherboard, a second heatsink is located on the Z87 PCH.  From a design perspective, the motherboard looks alot similar to the ASUS's Z87 ITX board but the ROG product adopts several new features not before seen in any iTX board. Power to the socket is provided by an 8-Pin connector.

First of these features is the introduction of SupremeFX impact, an add-on sound card which delivers high quality audio and features Headphone AMP, SupremeFX shielding, 120dB SNR and ELNA audio caps. With such an high quality sound card already provided with the motherboard, audiophiles won't have to buy a secondary audio card.

The Maximus VI Impact comes with a single PCI-e 3.0 x16 slot which can be used to add in a graphics card. ASUS showcased the board with the GTX 670 DC Mini which is a combo GPU for the ITX form factor PCs. For storage, it offers four SATA 6 GBps ports while two DDR3 DIMM slots offer memory compatibility with capacity upto 16 GB. Now the most interesting part about the Maximus VI Impact is its I/O panel, due to size limitations AMD decided to take off the overclocking switches from the board's PCB and reconfigured them on a separate Impact control  hub which is located on the I/O panel. Tiny but useful, this Impact control hub offers MemOK, Flashback, DeBUG LED and voltage headers in a compact size hub that's easily within reach and doesn't require you to open your chassis over and over again to reach the swtiches. Other I/O options include a bunch of USB 3.0 ports, Gigabit LAN, HDMI, DIsplay port, SPDIF and e-SATA. Pricing and release date were not mentioned. 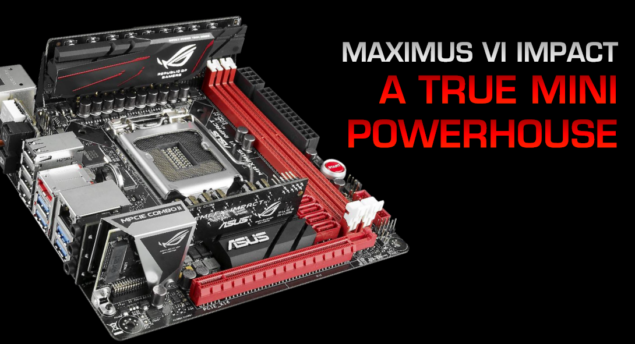