An ASUS Radeon HD7970 DirectCU II Top graphic card has been spotted over at FX GamExperience Event. According to LegitReviews , This is the first public reveal of the highly anticipated card from ASUS since it features the DirectCU II Heatsink along with a Factory overclock of 1010Mhz. ASUS also said the card would be available within three weeks which means we can see the official launch of the card next month. 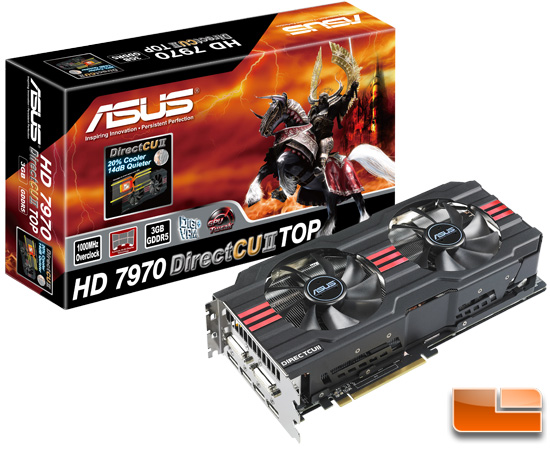 Underneath the massive DirectCU II Heatsink is a Radeon HD7970 GPU which runs at a stock 1010Mhz Core and 1400Mhz Memory Frequency on the 3GB GDDR5 (384-bit) mem. Those are some pretty intense clocks the ASUS team pushed on the card, A Reference variant in comparison has 925Mhz Core and 1375Mhz Mem Clock. There's probably alot more room for overclocking left since the card comes with a tougher power phase and Top Quality Components.

The card allows for Six Displays to run simultaneously through two Dual Link-DVI and Four Full Display ports. There's also an airflow bracket on top of the slots which suggests that the card covers three expansion slots so only two can be crossfire'd together. The heatsink itself is a beast, Featuring an Aluminum Fin array block with a cooper base and 6 copper heatpipes running through it, Air is supplied through two large fans at the top, A backplate holds the card from the other side with the DirectCU II label.

ASUS also did a Furmark bench over at their booth, The GPU was ran at stock frequencies and had a idle temp of 29-30C and 66C at full load which is amazing. The fan speed was also set at auto and only ran at 30% during load and 10% during idle operation. This shows that the ASUS heatsink offers as much as 17C drop as compared to the reference solutions. ASUS also detailed that the card would cost only $20 more than the reference for a price of $579.99 (Not confirmed yet).

Following is a video of the guys messing around with the GPU: