ASUS is preparing another motherboard based on the X79 PCH Chipset and belonging to its ROG (Republic of Gamers) line of high end products, The tiny yet powerful Rampage IV Gene LGA 2011 Motherboard. The ROG Rampage IV Gene features a Micro-ATX Design which retains all of the goodies of high end motherboards on a small package powering Intel's latest Sandy Bridge-E Processors. 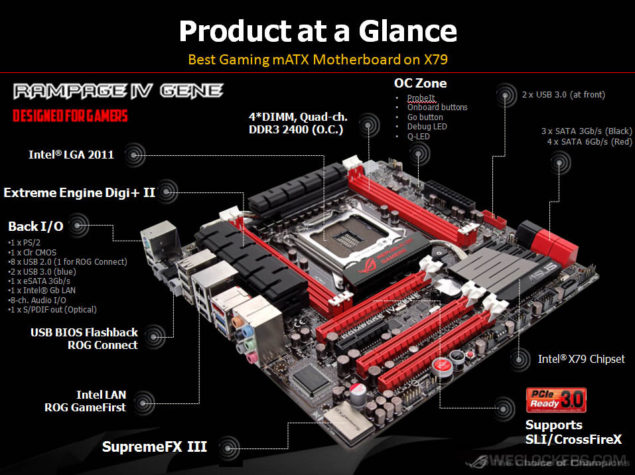 ASUS has equipped the motherboard with top quality electrical components such as NexyFET Power Block MOSFET which use the same amount of power while providing upto a 90% Efficiency rate, Black Metallic Chokes which can bear current upto 50A (+20A then ordinary design) and ASUS's own Extreme Engine DIGI+ II to provide enthusiasts the best features and reliability for their overclocking needs.

The board features Four Quad Channel DDR3 Memory slots allowing for memory support upto frequencies of 2400Mhz (O.C). A Maximum of 32GB ram non-ECC, Un-buffered memory is support by the board. Expansion slots include 3 PCI-e 3.0 x16 slots running at x16 (single mode) x16/x16 (dual mode) and x16/x16/x8 in triple SLI/CorssfireX configurations. A single PCI-e 2.0 x4 slot is also located on the board.