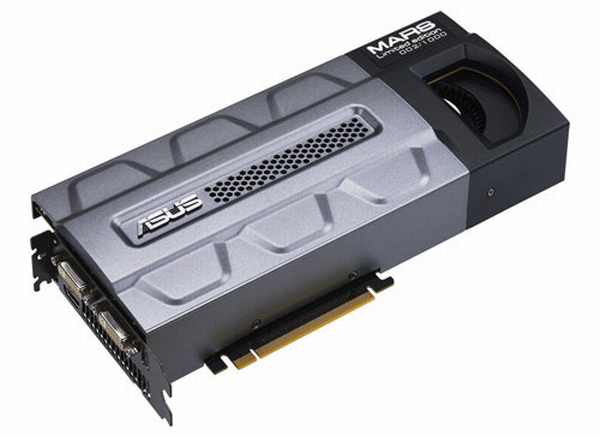 ASUS has detailed their new upcoming "Mars GTX 580x2" Graphics card which will use dual GF-110 chips. This is the third addition of Asus to it Mars series graphics card which also include the "295 GTX ASUS 4GB MARS" and the "MARS II ASUS GeForce GTX 480".

Only 1000 units of the card would be available because of its exclusivity. Specs includes two GF-110 Cores (GTX 580 x2) with 1024 Cuda Cores offering a 3GB GDDR5 memory running along a 384-bit x2 wide memory interface,The clock frequencies have not been detailed yet. The PCB uses a 19 phase VRM designed with Super Alloy Power Technology that allows the card a 15% increase in performance. Using a custom cooler "DirectCU II" which uses direct contact thermal based with multiple heatpipes to dissipate heat to the aluminium blocks which are cooled by two fans.

Availability hasn't been announce yet, Asus is also preparing some other cool graphics card which you don't want to miss out. Take a look below: