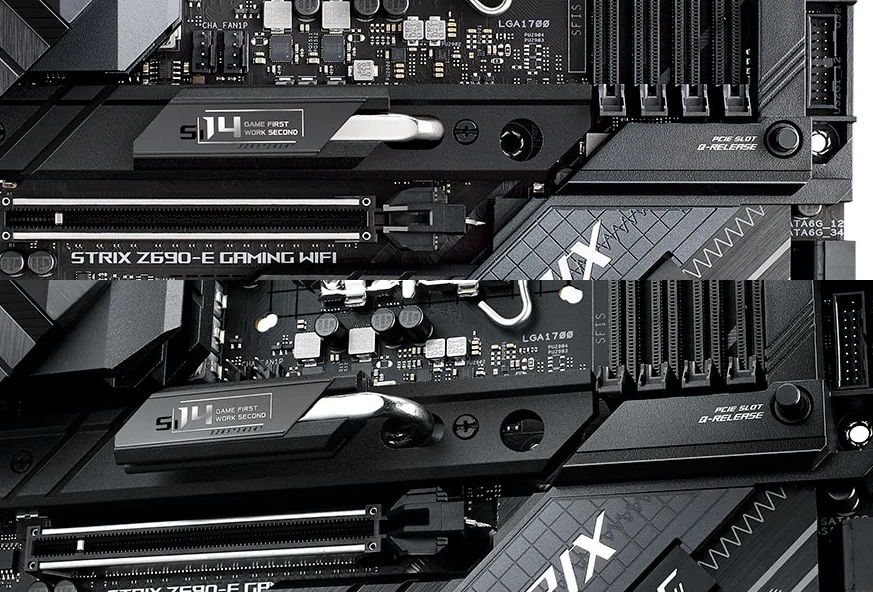 ASUS has teased its brand new solution to quickly releasing the PCIe slot-lock on their next-gen Z690 motherboards known as 'PCIe Slot Q-Release'. This new feature will be offered on the ASUS Z690 ROG (Republic Of Gamers) Maximus and ROG STRIX series motherboards.

On Twitter, user @momomo_us located a description, explaining the functionality of the design.

VideoCardz analyzed the ASUS Z690 motherboard lines and believes that they have discovered the motherboard models that will offer the PCIe Slot Q-Release. It appears to only cover just the ROG MAXIMUS and ROG STRIX lines.

The ASUS motherboards missing from the list are the ASUS TUF, ProArt, and PRIME series motherboards, which we are to speculate that those three families will not offer the quick-release functionality. It is also rumored to not be available for the smaller and more compact Micro-ATX and Mini-ITX ROG STRIX series. With the compatibility of PCIe 5.0, the next-gen PCIe technology, it is possible that the missing ASUS motherboards will be refashioned to offer that functionality down the line, but this is only speculation. No word has been released from ASUS about their other motherboard lines' functionality in the future.

The first ROG motherboards made hardcore overclocking more accessible, and we've stayed at the forefront of bringing advanced tuning to everyone. Our automated 5-Way Optimization software delivered expert-level tweaking with a single click. The latest AI Overclocking system sets speeds automatically based on silicon and cooling quality, and can train continuously to optimize performance over time.

As a reminder, it is never wise to swap out your GPUs connected to the motherboard while the system is active unless specifically stated by the manufacturer. There are none out currently that offer to remove the GPU while the system is on, and in the process of removing the card, you will possibly damage the motherboard, graphics card, or the entire system as a whole.