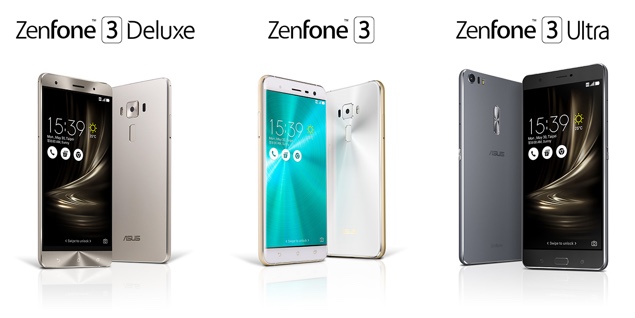 ASUS has just unveiled its brand new ZenFone 3 flagship smartphone alongside Deluxe and Ultra variations of the handset. What separates these three handsets from one another? We'll explain in detail.

ASUS Aims To Take Over The Smartphone Market With The ZenFone 3, Hopefully

ASUS is not really known in the smartphone space for making the 'best ever' handsets when compared to the likes of Apple, Samsung and others. But without a doubt, the company knows a thing or two about hardware, but fails to get the traction from consumers which they truly deserve. This year, ASUS is hoping to change everything with the announcement of the ZenFone 3, ZenFone 3 Deluxe and the ZenFone 3 Ultra at Computex.

The barebones version out of the three handsets, comes packed with a 5.5-inch Super IPS+ LCD panel with a resolution of 1920x1080. In the year 2016 that might not seem acceptable, but quite frankly, as long as those pixels aren't visible from an average viewing distance, things are absolutely golden for the user.

On the SoC front, users can expect a Snapdragon 625 chipset, based on a 14nm process. In case you're wondering, you get a total of eight Cortex-A53 cores under the hood clocked in at 2GHz. That's a lot of horsepower if you're asking us. But that's not all - the device comes with 3GB of RAM (which is quite decent) as well as 32GB of onboard storage, with an option of 64GB also available. And on the GPU front the ZenFone 3 will ship with an Adreno 506, which is more than enough for gaming and on-screen rendering.

The rear camera on the ZenFone 3 is a Sony module packing in 16-megapixels for those crystal clear shots. With an aperture of f/2.0, second-generation laser focus technology, a color correction RGB sensor topped off with a dual tone LED flash, you can rest assured the ZenFone 3 is going to be a good contender in the camera department.

With all that power under the hood, the ZenFone 3 can record video in 4K, and features 4-axis optical stabilization and 3-axis electronic stabilization as well. And on the front of the ZenFone 3 you get a powerful 8-megapixel camera capable of taking photos and recording video in a 85-degree field of view.

The ZenFone 3 also features 802.11ac WiFi with MU-MIMO, a USB Type-C port (USB 2.0 speeds) for charging and syncing, Category 6 LTE modem, a fingerprint sensor on the back along with the usual other suspects you'd expect from a smartphone of this category.

Powering all of the above is a decent sized 3,000mAh battery, all enclosed in a beautifully designed glass body.

Wrapping things up - the ZenFone 3 is an all-round handset with a beautiful design and a killer price point.

Unlike the ZenFone 3, the ZenFone 3 Deluxe comes with a larger 5.7-inch Super AMOLED panel with a resolution of 1920x1080 with deeper blacks and insane contrast levels. And if you think that wasn't enough, the device even comes with the mighty Snapdragon 820 processor coupled with 6GB of RAM as well as a storage option of up to 256GB. That's downright insane if you're asking us, but in a brilliant way, of course.

Since this is a 'Deluxe' smartphone, therefore the GPU gets a boost in this variant as well, with the Adreno 530 ticking under the hood like a boss. If you're going to use this smartphone for gaming, then you don't have to worry about stutters or slowdowns at all.

Again, unlike the ZenFone 3, the Deluxe variant also packs a better camera. On the rear you can expect a 23-megapixel Sony sensor with f/2.0 aperture with a 6-element lens, along with optical hardware and software gimmickry to shoot stable photos and videos as well.

The ZenFone 3 Deluxe features 802.11ac WiFi with MU-MIMO, category 13 LTE for faster download and upload speeds, USB Type-C capable of USB 3.0 speeds, a fingerprint sensor as well as a 3,000mAh battery like the ZenFone 3.

Since this is a more premium handset, therefore it features a curved metal back instead of glass.

The last handset out of the bunch of three is the ZenFone 3 Ultra. From the name, you can already tell this is a smartphone aimed at those who love to consumer their content big and wide while on the go. And that's why the ZenFone 3 Ultra comes with a monstrous 6.8-inch IPS LCD panel with a resolution of 1920x1080. At this size, it's like carrying a small theater in your pocket.

The ZenFone 3 Ultra keeps things a little simple on the internal hardware end, and comes with a Snapdragon 652 chipset, one which is slightly overpowered compared to the ZenFone 3. And things are topped off with 4GB of RAM, an Adreno 510 GPU and up to 128GB of storage option.

Since the ZenFone 3 Ultra is a large handset, therefore it comes with a bigger battery packed inside as well - 4,600mAh to be more precise. And it features extra elements too that sets it apart from other variants as well - such as a PixelWorks iris2+ TV grade processor for enhanced 4K playback, 7.1 DTS headphones support, and the device can act as a power bank for charging other devices as well.

The fingerprint sensor on the Ultra is located at the bottom of the display instead of the back of the phone.

All of the above mentioned handsets will ship with Android Marshmallow topped off with ASUS' own custom UI dubbed as ZenUI 3.0.

When Can I Buy These Phones?

The exact release date for these handsets is unknown at this point, but we're guessing they should be available somewhere in summer time. But don't worry, we'll keep our readers fully updated whenever these monstrous smartphones are available, so stay tuned!