ASUS might be upto something big , According to German Media reports the manufacturer will be releasing another ASUS ARES Mars GPU on Computex 2011. The card would feature Dual GF-110 Cores (GTX 5** Series) but would be called "GTX 595 ARES Mars".

You may wonder what's the 595 for? Well, Reports reveal that unlike the GTX 590 it would feature a much faster clock rate of 875MHz, 1700MHz, 4800MHz for Core/Shader/Memory respectively which are insane clocks against the GTX 590's 607Mhz  and 772 Mhz of the GTX 580. Considering the above clocks, The card would be real hot and ASUS may have to re consider putting those insane clocks for the final release as GTX 590 being one hot card already fails during overclocking.

The card would feature the ASUS Ares Mars heatsink like the one posted below, ASUS may consider to replace the copper blocks with improved vapor chambers for better thermal environment for the card. Its also likely that dual 3GB versions of the GTX 580 which were recently released may be used in the card. These are a few details we know yet, Maybe a press release is held during the Computex 2011 event next month. 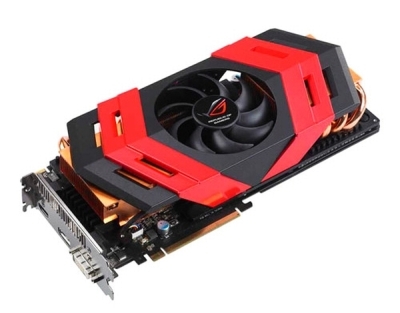