Over the past few days the official Assassin's Creed account tweeted six tiles showing a different version of the same brass knuckles as in the picture on the site but without the messages. Some symbols seem to be engraved on the brass, including the Assassin's emblem, a cog, a horse carriage, a locomotive and a crown.

Some of the messages seem to hint at the symbols on each specific tile. The messages: "Don't be late", We're only a few days away", "Who wears the crown", "Race over to the site", "The Brotherhood is calling", and "Tomorrow's the big day", all have some relevance in indicating something associated with the story of Syndicate. 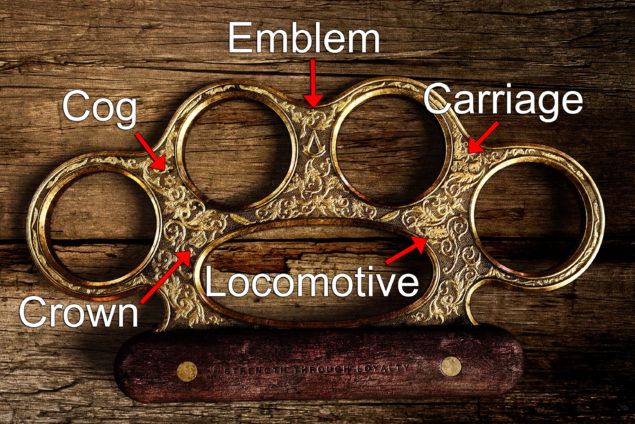 The individual tweets can be viewed below:

We're only a few days away. RSVP so you don't miss out ►► http://t.co/vbuiDCvqHT pic.twitter.com/vnxi9Bl63G

Who wears the crown? RSVP for the World Premiere Event to find out ►► http://t.co/0lLNAHjuYj pic.twitter.com/q7id3qALc4

Race over to the site to RSVP for the #AssassinsCreed World Premiere Event ►► http://t.co/A1pbvnjNF3 pic.twitter.com/EY1IBAWOW2

The Brotherhood is calling. RSVP for the World Premiere Event ►► http://t.co/w8jK8kjx5W pic.twitter.com/c5oaRoqKAR

Tomorrow's the big day. Don't miss out. Sign up & get a reminder ►► http://t.co/3Sp6FiBOEQ pic.twitter.com/d3nKOoL62u

We will find out what these messages are hinting at tomorrow May 12 at 6PM CET.

I have reported a few hours ago that Assassin's Creed Syndicate will feature two main protagonists, brother and sister Jacob and Evie. The majority of the missions will be played with Jacob, but players will take control of Evie will also be controllable.

Assassin's Creed Syndicate will not feature any multiplayer missions.

The teaser reveals a rather sleek-looking glove and hidden blade as well as the assassin wearing a knuckle duster on the other hand while holding a cane with a rather fancy gold bird head or rather a Rook. The message reads "Oppression has to End"

At the official site, the same message appears, as well as the sentences: "We Forge the Chains We Wear in Life" which is a quote from “The Cricket On The Hearth” by Charles Dickens, "God Save the Queen", "Strength Through Loyalty" and the word "Rooks", which is the type of bird on the assassin's cane. Perhaps some sort of new Creed.

Apart from some leaked screenshots of the game nothing else has been revealed other than the setting and period. The new Assassin's Creed will take place in Victorian London, which will potentially be one of the most interesting settings the franchise has ever visited.

It has recently been suggested that Ubisoft is working on implementing  "innovative asynchronous gameplay" into Assassin's Creed Victory according to the Linkedin profile of the game's associate producer, Daniel Palix.

Palix CV states that he led development on a pair of new features in the new game, including "an innovative asynchronous gameplay" and "some innovative Player Space". He explains however that the asynchronous mode is not confirmed.

The asynchronous gameplay if implemented, which I believe it will be, it should relate to changing between characters in order to complete objectives, potentially adding some unique elements to the mission structure.

We will bring you any new information on Assassin's Creed Syndicate, as soon as it becomes available.