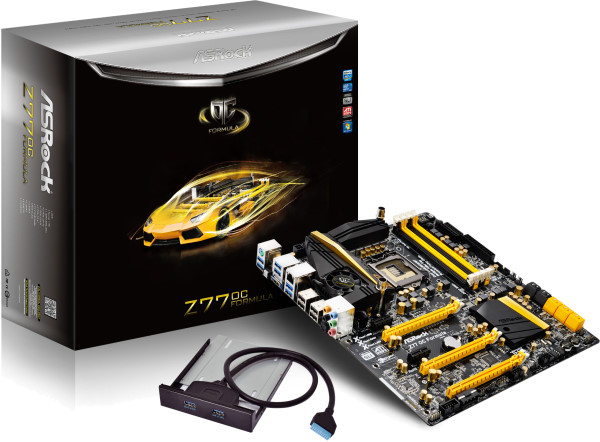 Behold, the new world record of CPU overclocking! The World’s Legendary Overclocker Nick Shih has overclocked an Ivy Bridge Core i7 377oK processor to a mind blowing 7.136GHz with the newly released ASRock Z77 OC Formula. The world leading motherboard manufacturer, ASRock Inc., is overjoyed to announce that we have landed on the number one spot on HWBOT and also set a new overclocking world record.

The overclocking world champion, Nick Shih, exclaimed “Hitting number one on HWBOT makes my day, but scoring number one with the motherboard I designed is like the wildest dream come true! Thanks to everyone who helped make my dream, ASRock Z77 OC Formula, into reality.

“When we declared that ASRock Z77 OC Formula was born to be fast, we really meant what we said. No stretching the truth. No marketing gimmicks. Our goal wasn’t coming second or third, it was number one the whole time, and now our effort has paid off.” commented James Lee, V.P. of Sales and Marketing at ASRock.

ASRock Z77 OC Formula is the first motherboard of our OC Formula series, a series of motherboards specifically designed for overclocking. Undeniably, the secret to success is the three Formula kits implemented on the motherboard. The Power Kit which delivers smooth and stable current with Digi Power, DSM, PAC, MFC and the 12+4 power phase design. While the Cooling Kit provides the best heat dissipation solutions, such as Twin-Power Cooling Heatsink, 8-layer-PCB design with 4 sets of 2oz copper inner layers and GELID Solution GC-Extreme Thermal Compound. And of course, the strictly designed Connector Kit, including Hi-Density Power Connectors and 15μ Gold Fingers. Besides the three Formula Kits that makes this motherboard Born to be Fast, there are also Nick Shih’s OC Profile settings in the UEFI, so you have a chance to feel what it’s like being a world champion!

A motherboard designed for overclocking must be a combination of flawless hardware design and professional but user friendly software. ASRock Z77 OC Formula is the fast and furious motherboard every overclocker would wish for. Just try it for yourself, and maybe you will become the next Nick Shih!