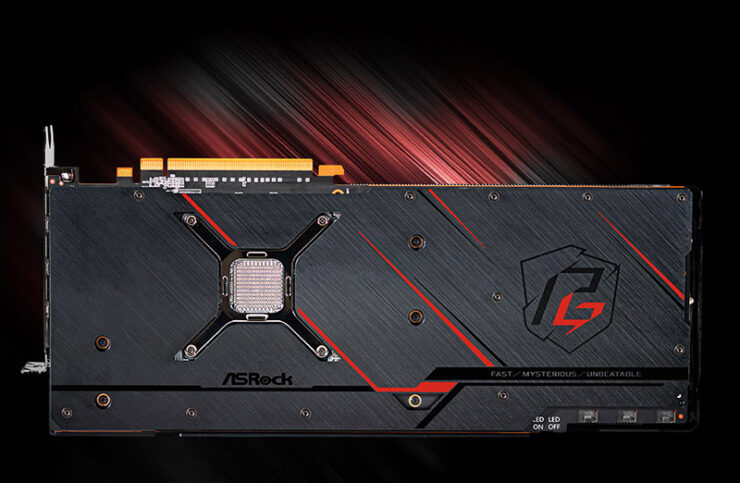 ASRock has also unveiled its first custom design for the AMD Radeon RX 6900 XT graphics card, the RX 6900 XT Phantom Gaming D. The fully non-reference design features a massive triple-fan cooler and comes with an insane power requirement that is expected of the flagship Big Navi GPU based graphics card.

The ASRock Radeon RX 6900 XT Phantom Gaming D graphics card comes with the back and silver livery that is known of the PG design along with red accents. The card has an abundance of Polychrome SYNC RGB effects around the middle fan and the sides of the shroud. The ASRock 6900 XT Phantom Gaming D makes use of a wider and longer PCB that features a custom design. From what I can tell, the card seems to feature a 16+3 phase design which is accompanied by high-end power components such as Dr.MOS MOSFETs, 90A Power Chokes, Nichicon 12K capacitors, a 2oz copper PCB and more.

You can also spot that ASRock Radeon RX 6900 XT Phantom Gaming D is using a massive aluminum heatsink that features 9 heat pipes. These heat pipes make direct contact with the GPU baseplate that is made of a nickel-plated copper design. Power is provided through a dual 8-pin connector configuration. Both cards feature a Stripe-Axial fan design with a total of 11 fan blades. There's also a reinforced metal frame to add extra durability to the PCB. Both cards will feature 2310 and 2190 MHz boost clocks, respectively.

On the Radeon RX 6900 XT Phantom Gaming D, you get a full coverage backplate with LED On/Off switches and a triple 8-pin connector configuration. ASRock has also included a reinforced metal frame that adds extra durability to the card while an ARGB pin-header provides users to add more bling to their PCs.

ASRock has yet to decide the final clock speeds for the cards but expects it to feature a factory-overclock which is evident by its 'OC' branding. There's currently no word on the pricing of the ASRock Radeon RX 6900 XT Phantom Gaming D graphics card but it is expected to feature a hefty premium over the reference MSRP of $999 US and should launch in the coming weeks but not on the launch day today. With that said, ASUS also displayed its own custom variant a few hours ago and we expect other manufacturers to also showcase their custom RX 6900 XT designs during the launch which is just 4 hours away from now!