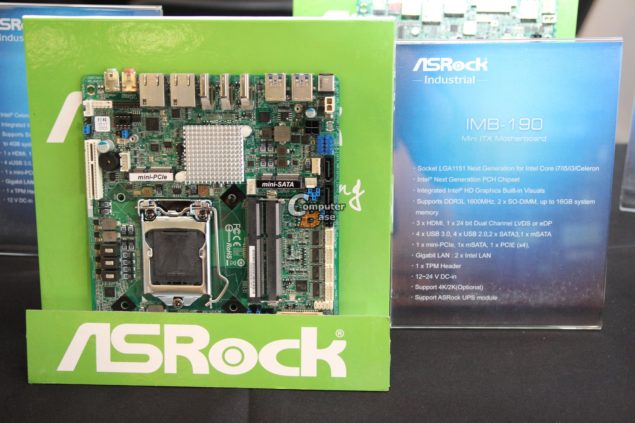 The motherboard revealed by ASRock is their IMB-190 that features the Mini-ITX form factor design. This board comes with a range of features such as the LGA 1151 socket which is listed to support Intel's next generation of Skylake processors (Core i7/i5/i3/Celeron). The board also comes with a next generation PCH, the current SKU for the PCH is not mentioned but we suspect it to be the Q170 series chipset on-board this little board. It's seen from the specification sheet that the motherboard has support for DDR3L 1600 MHz memory (SO-DIMM) for up to 16 GB capacities. Display options include 3 x HDMI, 1 x 24-bit Dual Channel LVDS or eDP (Display Port) technology. I/O on the board consists of 4 USB 3.0, 4 USB 2.0, 2 SATA 3 and 1 mSATA connectors. Expansion slots include 1 mini PCIe, 1 mSATA and a single PCI-e x4 interface. There's a Gigabit LAN at the rear I/O panel and power is supplied through 12-24 V DC-in power source.

From a closer look, things get more interesting. At first sight, the LGA 1151 socket may not look much different then its predecessor (LGA 1150) but as the name suggests, there's one extra pin on the socket. There's a reason behind shifting from LGA 1150 to LGA 1151 with Skylake since its a completely new architecture that makes use of some physical changes beneath the pin connections. Another reason is that the pin connections had to be adjusted since Skylake removes the FIVR (Fully Integrated Voltage Regulator) from the CPU die and shifts that design back to the motherboard.

The other interesting bit about the LGA 1151 socketed board from ASRock is that it is designed to support DDR3L memory, not DDR4. Intel has advertised Skylake as the first mainstream platform to feature native DDR4 support which is true, however it is also known since past year that Skylake will feature DDR4 memory support while retaining support for the current DDR3 memory. The motherboard in specific features support for DDR3L memory available in SO-DIMM form factors. It's upto the motherboard vendors to offer either DDR3 or DDR4 boards and the choice will be attractive to the business platforms who can make use of the inexpensive DDR3 memory on the new platforms such as H110, Q170 and B170. 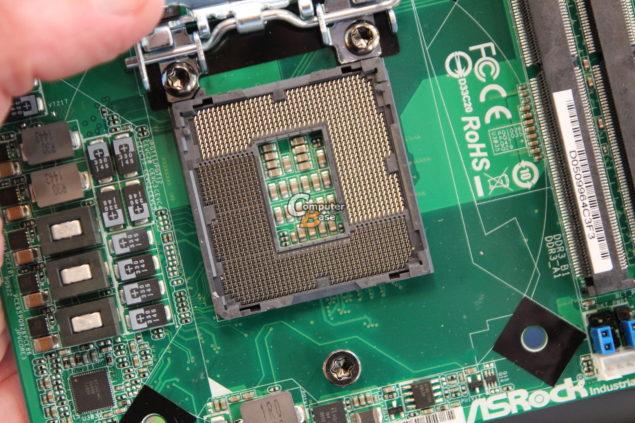 The roadmap does confirm something we have shown a few days ago, listing down the 95W, 65W and 35W TDPs for the upcoming Skylake processors. The workstation side Xeon E3-1200 V5 chips and Skylake-K chips will feature a 95W design while the mainstream and entry level chips will have a 65-35W TDP.

The Z170 would be the flagship performance chipset which will support the unlocked K-Series Skylake processors. The chipset will feature up to 20 PCIe Gen 3 lanes, 6 SATA Gen 3 ports, 10 USB 3.0 ports and a total of 14 total USB ports (USB 3.0 / USB 2.0), up to 3 SATA Express capable ports, up to 3 Intel RST capable PCI-e storage ports which may include x2 SATA Express or M.2 SSD port with Enhanced SPI and x4/x8/x16 capable Gen 3 PCI-Express support from the processor. Intel Skylake processors are expected to launch in August at IDF 2015, more information is expected to be revealed prior to that.