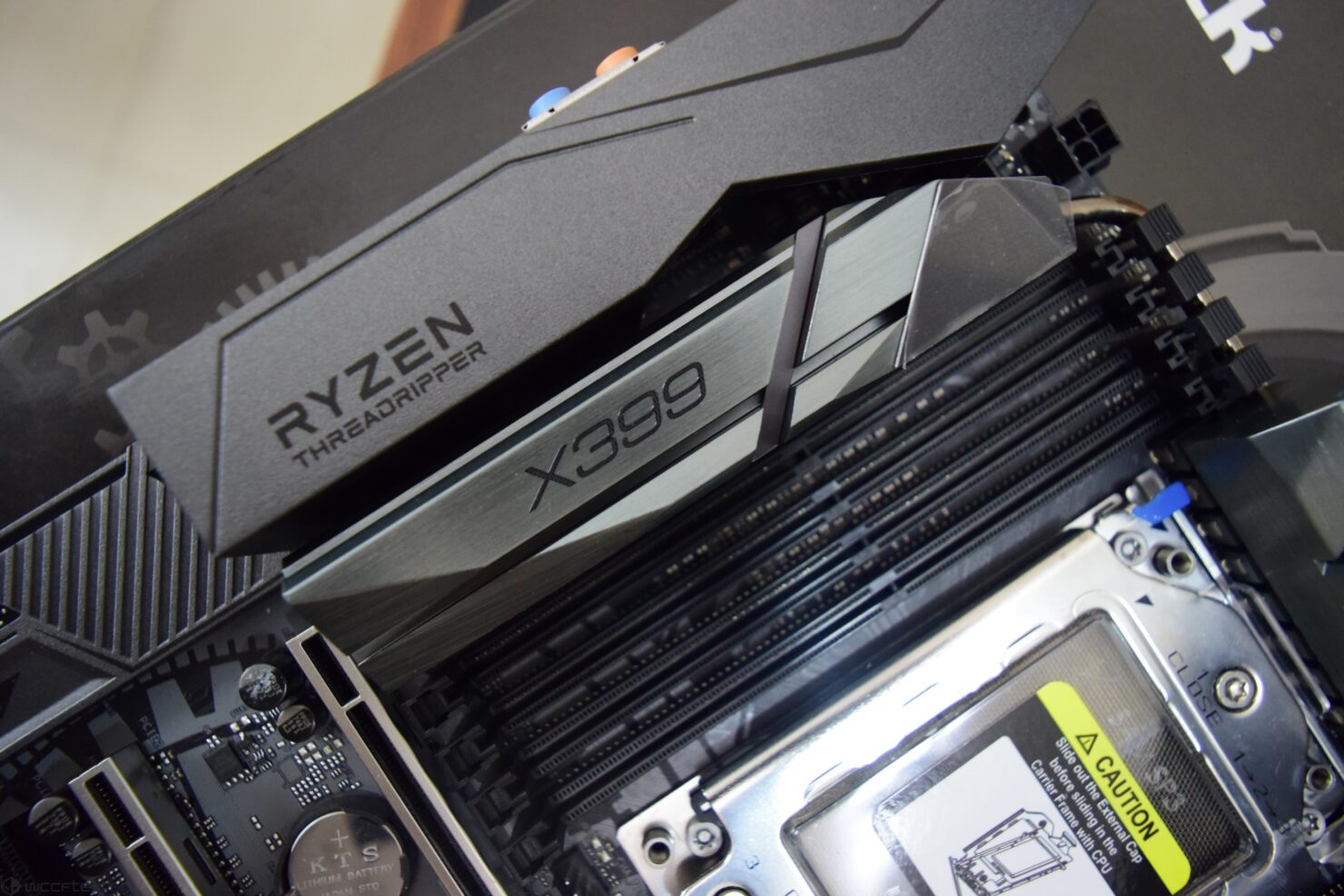 ASRock will soon be unveiling their latest micro-atx motherboard offerings for both Intel and AMD HEDT platforms. The motherboards will be featuring distinct designs compared to standard board form factors such as ATX while retaining the most high-end enthusiast grade features.

There are two motherboards to talk about, for AMD, ASRock will launch the new X399M Taichi and for Intel, they will introduce the X299M Extreme4. Both motherboards are unique in their own way and there's a lot of specifications to talk about so let's get started.

First up, we have the ASRock X399M Taichi which is a high-end motherboard for the Ryzen Thread ripper platform. The AMD specific motherboard is the first to feature a micro-atx design and it will support all Ryzen Threadripper CPUs on the TR4 socket. Talking about the CPU support, the board features a powerful 11 phase DR.MOS design and is supplied powered through dual eight pin CPU power connectors. Two massive heatsinks cool the power delivery system while featuring heatpipe cooling technology.

The motherboard comes with four DDR4 DIMM slots which supports quad channel memory. It is interesting because this is the first AMD TR4 X399 motherboard to feature four DDR4 DIMM slots instead of eight. Regardless, it will be enough to support up to 128 GB of system memory. In terms of storage, the motherboard features 8 SATA 6 Gbps ports, a U.2 port, dual USB 3.0 front panel headers and tons of other front panel connectivity ports. 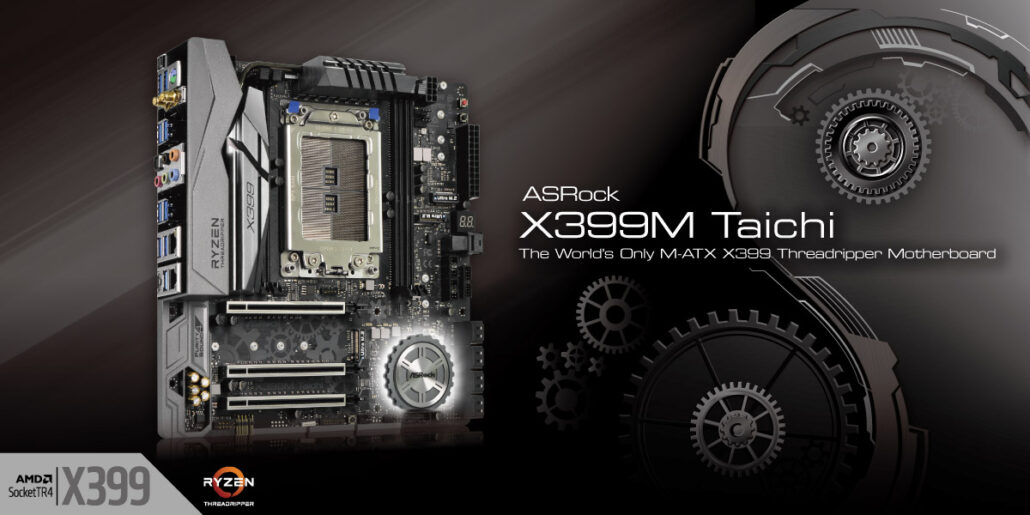 For expansion, ASRock is giving this board three PCI-e 3.0 x16 with full x16 capabilities since AMD Ryzen Threadripper CPUs drive up to 64 PCIe lanes. There's also three Ultra M.2 slots with rated speeds of up to 32 GB/s (PCIe 3.0 x4). The PCH is cooled by the standard Taichi gear design heat sink which includes RGB lighting. The motherboard has a very nice gear texture on the PCB and it is something we haven't seen before on previous Taichi branded motherboards since we did test the full X399 Taichi and even the X299 Taichi motherboards.

Sound is powered by the Purity Sound 4 system and the rear panel I/O shield adds an additional level of durability to the motherboard while upping the overall aesthetics. In terms of I/O, we get a PS/2 port, a BIOS flashback switch, 6 USB 3.1 Gen 1 ports, two USB 3.1 Gen 2 ports (Type-A + Type-C), Dual Gigabit Ethernet ports and 7.1 channel audio jack and a WiFi / AC / Bluetooth module that is a bonus. The motherboard looks absolutely fantastic for micro-atx builders and this just shows the love of ASRock towards the HEDT AMD platform.

The second motherboard from ASRock, the X299M Extreme4 is also unique in many ways. It does feature the Micro-ATX design and features the LGA 2066 socket to support all CPUs up to the 18 core Intel Core i9-7980XE which is an absolute juggernaut. The motherboard comes with a solid 11 phase Dr.MOS power phase design which is powered by a single 8 pin connector. The heatsinks located on top of the VRMs look pretty solid and include heatsink cooling design which is a plus.

As for memory support, the motherboard also gets four DDR4 DIMM slots instead of the standard 8 slots we are used to on ATX X299 boards. The board can support 128 GB of memory at speeds that are rated beyond 4000 MHz (O.C.+). 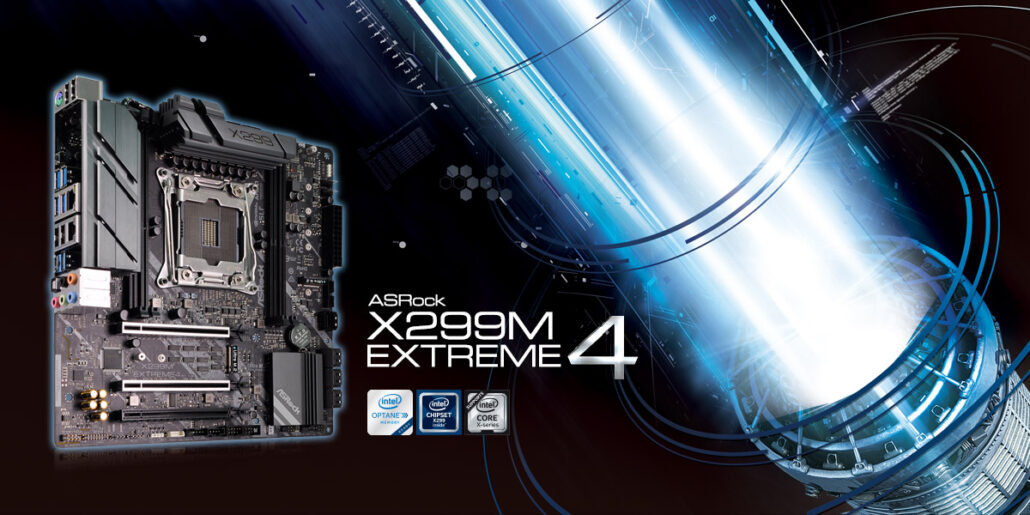 Storage includes 8 SATA 6 Gbps ports, a single USB 3.0 front panel header and two USB 2.0 front panel headers. There's a large heatsink on the PCH though we aren't sure if that comes with RGB illumination. Expansion slots include three PCI-e 3.0 x16 (x16/x8/x4) and two Ultra M.2 slots. There seems to be a decent quality audio system on board the motherboard and the solid meat heatsink cover on the rear panel I/O is a good touch.

In terms of I/O capabilities on the rear panel, the X299 M Extreme4 includes four USB 3.0, four USB 3.1 Gen1, two USB 3.1 Gen 2 (Type A + Type C) ports, a HD audio jack, dual Gigabit Ethernet LAN ports and a clear CMOS switch along with a PS/2 port. It doesn't feature wireless connectivity but we can expect cost of this motherboard to be slightly on the lower side.