You might be aware that the debut of the Intel Quark X1000 SoC is drawing ever closer. Though some developers have been able to play with Intel's tiny SoC via the Galileo all-in-one device, the actual release is sometime in April. Interestingly ARM has just taken quite an interesting potshot at Intel's Quark SoC, ridiculing it to be too hot. Which if their video is to be believed, it actually is. I am just kidding, relax.

The video is fairly simple. There is a guy with a smart watch, a Galileo board, a lamp and table. Oh and there is Jazz music playing too, cause you know, what is a review without jazz. He compares first an ARM Cortex A9 based smartwatch, reading it with a laser thermal sensor and then the Quark X1000. The Quark X1000 runs at double the temperature of the ARM Cortex A9 and the video emphasizes that by sizzling noises in the background. Here are the screenshots of the video: 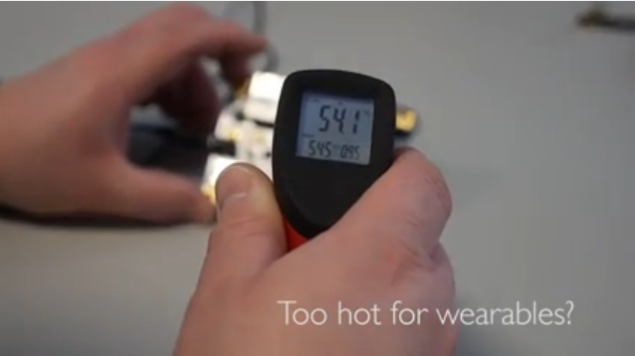 As you can probably see, just to make sure that you get the point, the guy even takes a thermal Imaging Camera to show you just how hot the Intel Quark X1000 is running. The video was uploaded to ARM's channel and here is the link to the full video.  Jokes aside, I very much condone this type of behavior. Not only does this promote awareness about the weakness of a product (no one knows said weakness better than your rival) but friendly sparring gives way to healthy competition. This makes sure that neither company pulls a cloth over your head. That said, one reason not to take the video too seriously is that the Quark X1000 is running on the mains and is clocked at a high rate since it is running the Galileo board. In a smart watch, the SoC will be running on the battery and will be lower clocked so rest assured that whatever temps it might have, it will be far lower than these.

#ARM takes potshots at #Intel Quark claiming it to be too hot for wearables. http://t.co/C08Tw7LvbK pic.twitter.com/0XxQFDXAYs