The folks over at Overclockers.ru released the roadmap of ARM which shows the process schedule till 2018. The picture states that the values given are indicative of when volume production of that particular process will begin. An interesting thing to note in the roadmap is that ARM will skip 20nm on all applicable platforms except 'Premium Mobile' which refers to the high end Mobile Industry (duh) and is already in effect. ` 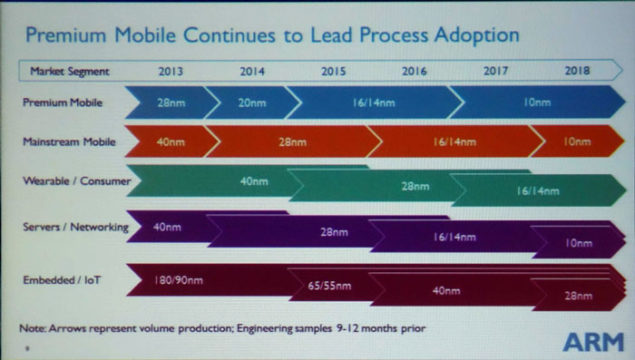 The leading process in ARM chips is ofcourse the high end mobile segment, where one of the major driving forces is the great Apple itself. According to the roadmap the engineering samples of all process will be available 9-12 months prior to volume production. This would mean that we should see first samples of 10nm ARM chips in early 2016. Basically, Servers & Networking, Wearables & (General) Consumer, and Mainstream Mobile will shift directly from 28nm Process to the 16nm/14nm process directly. Embedded ARM applications won't arrive to 28nm till 2018 so that one isn't mentioned but I assume it will shift directly to 16nm FinFet too. The only reason high end mobile didn't do so is because the market demand is too high and companies like Apple pay alot for the slightest edge.

We already know that TSMC has taped out Cortex A57 dies (big.LITTLE chip implementation) on the 16nm (excuse this awesome Bobafet joke),eh, FinFET node. So this roadmap is clearly on track and will hopefully remain so unless ARM decides to follow Intel's scheduling philosophies too. ARM roadmap is usually not in any way related to the high performance ASICs (GPUs) but it certainly provides a hint as to the capability of TSMC. There has been (very) idle speculation that the Red and Green GPUs are actually going to be be based on the 16nm FinFET process instead of the 20nm so that they catch up with lost mileage of Moores Law, but to be honest, at the current state of affairs, it would take at-least a year before the node becomes mature enough for any kind of high performance ASIC work.