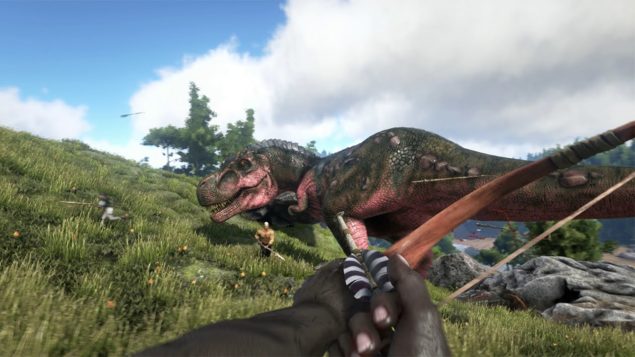 ARK: Survival Evolved has been one of the most successful indie releases after its Steam Early Access debut. Launched in June 2015 to ride the wave of the blockbuster movie Jurassic World, it officially surpassed two million sales in October; SteamSpy now tracks owners' data at 2.9 million.

That's before ARK: Survival Evolved even released on Xbox One's Game Preview program, where the game quickly surpassed the daily player count of the PC version. However, the game is still in active development and we have stumbled upon some hints straight from the press releases that might indicate a delay of the full release.

The goal had been to launch one year after the Steam Early Access debut, in June 2016. In the frequent press releases about the game's updates, this was always specified right at the end, until the very last press release sent out in 2015. Titled RAPTOR CLAUS MAKES IT SNOW ON STEAM IN MASSIVE ARK: SURVIVAL EVOLVED WINTER WONDERLAND UPDATE and shared on December 23, it still mentioned the original release date as you can read below.

One could have assumed a slight delay of about three months (Summer will end on September 22) at worst. However, the last two press releases have now dropped the season reference entirely, with ARK: Survival Evolved now pinned for a generic 2016 launch. Here's a snapshot from the ARK: SURVIVAL EVOLVED BRINGS STEAM PLAYERS AN EGGSCELLENT ADVENTURE FOR EASTER! (*GROAN*)... press release sent out on March 25.

It could have been just a typo, but yesterday's ARK: SURVIVAL DEVOLVED FLIPS THE EVOLUTIONARY COIN ON ITS HEAD -- DINOS GRAB A SADDLE! press release had the same wording. At this point, it's fair to assume that the full version of ARK: Survival Evolved might release during the Fall (barring any further delays) rather than Summer; of course, this affects mostly PlayStation 4 gamers as owners of a PC or Xbox One can already play ARK through Early Access/Game Preview.

There could be plenty of reasons for this occurrence, from the usual ones (more polish makes for a better game) to those specific to ARK. For instance, just over a couple weeks ago Studio Wildcard announced their decision to split the popular Battle Royale/Hunger Games themed arena mode into a F2P standalone title: Survival of the Fittest. This Multiplayer Online Survival Arena now has its own roadmap with a projected launch in Q4 2017, thus representing additional workload for the development team.

Moreover, there's also the non-trivial matter of the ongoing legal dispute between Trendy Entertainment and Studio Wildcard. Trendy Entertainment, the studio behind Dungeon Defenders, filed a lawsuit in December 2015 stating that their former Creative Director Jeremy Stieglitz violated contractual agreements not to compete with his former company and has been working on ARK: Survival Evolved since he resigned from Trendy.

Studio Wildcard, who has not publicly commented on this issue yet, filed a motion to dismiss with the following motivation:

Trendy’s Complaint reads more like a salacious tabloid story than a short and plain statement of the ultimate facts allegedly showing Trendy’s entitlement to relief, as required by the Florida Rules of Civil Procedure. Many of the allegations are disparaging and included simply to be provocative. They are irrelevant, immaterial, impertinent, and scandalous. As such, these allegations should be stricken.

The court of Florida is due to hear Trendy's arguments on April 27; should their motion be accepted, there could be consequences for ARK's development. Let's hope it won't come to that, with the game eventually releasing later this year after a proper polish pass.