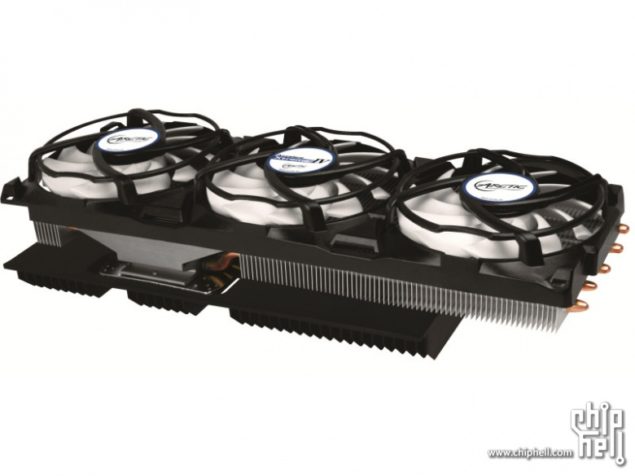 The ARCTIC Accelero Xtreme IV would be the latest addition in ARCTIC's VGA Cooling lineup which is similar to the Xtreme III but offers compatibility with several new graphics cards and features an additional baseplate. The rest of the specifications are kept same which include a 84-fin heatsink with 5 copper heatpipes which comes pre-applied with MX-4 thermal compound and is cooled down by three 92mm PWM controlled fans which allow upto 300W of cooling performance. The heatsink measures 288 (L) x 103 (W) x 50 (H) mm requiring at least three free expansion slots for installation.

The ARCTIC Accelero Xtreme IV's PCB and memory reinforcement plate helps reduce heat and offers additional cooling to the electrical components on the beefy Hawaii and GK110 based graphics cards. Users who have been waiting for custom coolers for their Hawaii graphics cards (Radeon R9 290X and Radeon R9 290) should check out the new heatsink once its available in the market to enhance their GPU cooling to reduce frame variance which was is an issue with the reference designs. Following is the GPU compatibility list of the ARCTIC Accelero Xtreme IV cooler:

The cooler is expected to hit retail availability shortly at a suggested price of 600 RMB or $99.99 US. The cooler would be compatible with the graphics cards mentioned above.