Apple’s Latest Offering: Get A 10 Percent Bonus Right Now If You Add Funds To Your Apple ID

Apple has started a new promotion in the United States which allows users to add funds to their Apple ID accounts with their iPhone. The funds are meant for purchases of apps, music, movies, and games. The company's new offering provides a 10 percent bonus up t0 $20 in credit to users who use their iPhone for the funding method. Let's dive in to see some more details on the matter.

Apple is sending out emails to users with details of its new promotion which provides a 10 percent bonus to funds added to their Apple ID accounts. The funding method is new to the US, but it's pretty common in other countries. The new promotion is common for the App Store and iTunes Store as the company has previously promoted. Here's how App;e puts it:

Now you can load money to your account more conveniently than ever right from the App Store. Then use your balance to enjoy games, apps, books, TV shows, Apple Music, iCloud storage, and more. Try it today and get an extra 10% added to your account.*

The offer is available for added funds between the amount of $1 to $200 and the maximum bonus you will receive will be $20 on $200 worth of funds added to your Apple ID. In addition to this, you can only get one bonus attached to your account in order to stack them with the lower funds. 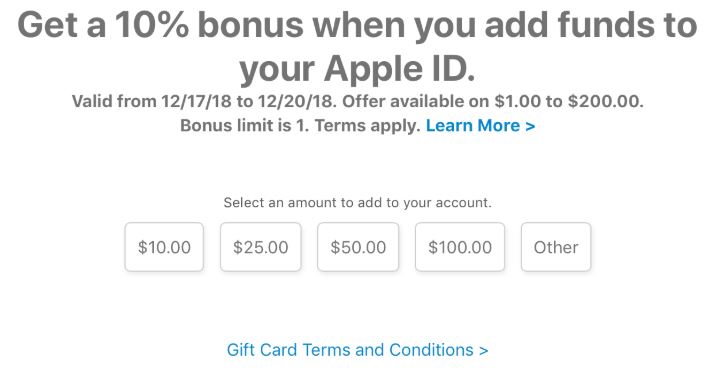 The bonus is being added between today, December 17 and December 20. Even though the bonus is not that enticing, but anything that is available as a benefit above the usual pricing model is a good thing. There will be more details to the story, so be sure to stay tuned in for more details on the matter.