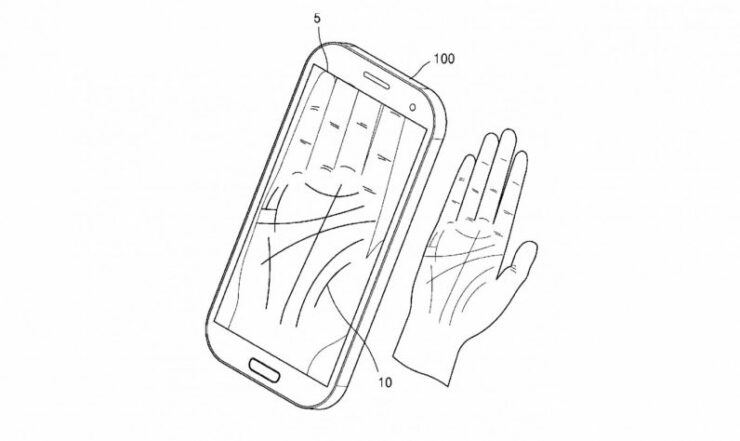 Fingerprint, IRIS and facial recognition systems... Wondering what's next? Samsung has filed a patent for a palm scanner for smartphones that is designed to help users remember a forgotten password. While many may associate palms with future foretelling, Samsung thinks it could also be used for password foretelling.

Future Galaxy phones could help you remember passwords with your palm...

The South Korean Galaxy maker has described this new authentication system (that works more like a password hint) in a recently filed patent application. The new system will have a user's password embedded in an image of their palm. If you have forgotten your password, just point the camera at your hand and it will show you some incomplete characters as a hint to complete your password. The characters will appear nonsensical to someone else trying this trick but the company hopes they will be enough to help the phone owner remember their password.

It isn't clear if this new system would remain exclusive to forgotten passwords or if it would be introduced as yet another authentication system. However, Samsung wouldn't be the first to coin this idea as previous research has actually looked into the palm-print authentication systems based on unique lines and veins.

With Samsung having always been brave enough to venture into the unchartered territories of new authentication systems - not always with great success, though - this patent reveals that the company may be looking into ways to do away with fingerprint scanners that take up screen real estate - much like its rival in the United States. However, following Apple's introduction of Face ID, it was expected that the South Korean firm would also be investing its efforts on a secure facial recognition system to compete against iPhone X. With this new approach, Samsung could actually come up with a cheaper and perhaps equally secure authentication process.

It should be noted, however, that while we may like to make everything about Samsung versus Apple, this may not even be yet another authentication battle. If this technology works, it could potentially help strengthen the current form of 2-factor authentication that depends on insecure SS7 protocols.