The stock market is a whimsical creature: Intel has had a spectacular quarter in pretty much all areas except one but Intel (NASDAQ:INTC) stock is already down 7% following weaker than expected guidance from the chip manufacturer.

If you are reading this, then you are probably not here for the hardcore financial metrics and are looking for a deeper understanding of Intel's medium-long term fundamentals - so here is the customary earnings analysis. (Ethics disclaimer: I do not own stock in Intel, NVIDIA, AMD or any tertiary PC company. I do however enjoy a press relationship with all companies involved). 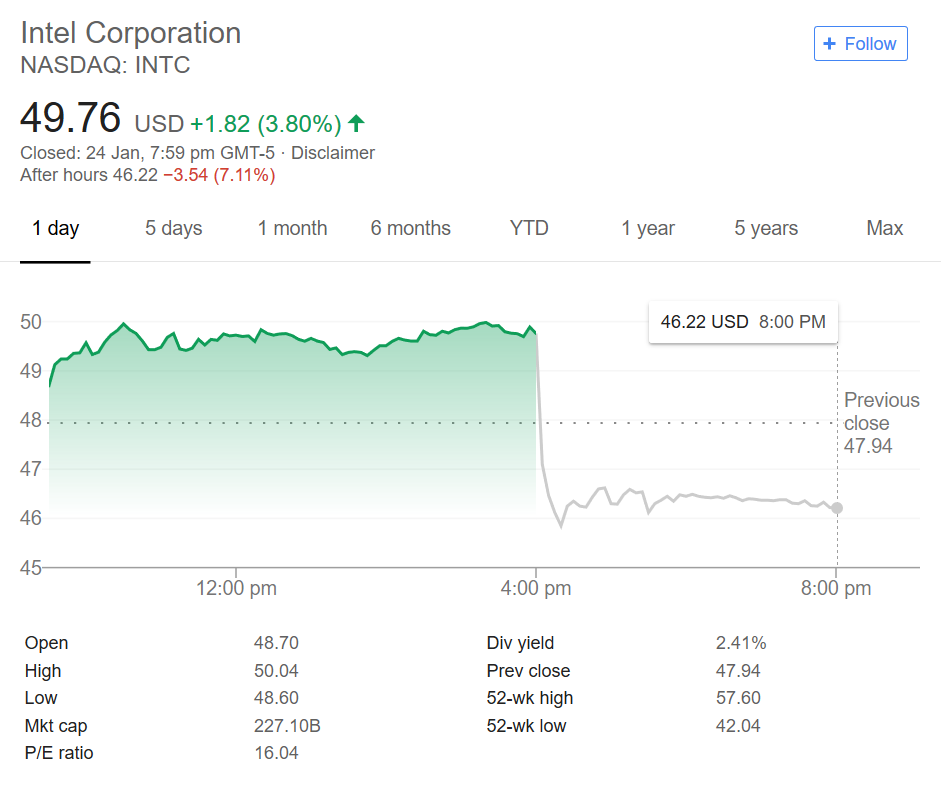 Intel has started the year 2018 with quite a few snags. It's 10nm woes were worsening and its longtime competitor, AMD had made a comeback. What's more, pretty soon it would find itself without a head, ahem, CEO as well. Fundamental wise, that was probably the lowest point Intel had been in ages.

In just a few months, however, all of this would change. The company started poaching talent left and right to assemble the dream team led by Raja Koduri that will go on and make Intel a GPU giant (the biggest diversification a company in this industry can hope for) while the company continued to do surprisingly well without a CEO. Jim Keller, the legendary CPU architect, was brought on board to solve the 10nm problems and from what I have heard, it is (finally) on track to hit the shelves by fall 2019.

Q1 2019 therefore, represents a blip on what should otherwise be smooth running for the company - the last lagging indicator of Intel's great stumble.

Intel successfully decouples itself from the process node during the Architecture Day event and this is something which I cannot stress enough. With Sunny Cove, architectural innovation is now no longer tied down to the process node. In fact, even though Intel will stay on the 14nm node through out 2019, the maturity of this node means that Intel can attack clock speeds so high that they all but overcoming the lost process advantage as far as enthusiasts are concerned.

Intel is also preparing to roll out multi-core processors clocked at over 5GHz and has made significant progress on the AI and self-driving front. All in all, if the company can manage the risk of AMD's Ryzen series processors adequately, I see no reason why they cannot bounce back to highs last seen in June 2018.

Intel Corporation today reported fourth-quarter and full-year 2018 financial results. The company also announced that its board of directors has approved a five percent increase in its cash dividend to $1.26 per-share on an annual basis.The board declared a quarterly dividend of $0.315 per-share on the company’s common stock, which will be payable on March 1 to shareholders of record on February 7.

“2018 was a truly remarkable year for Intel with record revenue in every business segment and record profits as we transform the company to pursue our biggest market opportunity ever,” said Bob Swan, Intel CFO and Interim CEO. “In the fourth quarter, we grew revenue, expanded earnings and previewed new 10nm-based products that position Intel to compete and win going forward. Looking ahead, we are forecasting another record year and raising the dividend based on our view that the explosive growth of data will drive continued demand for Intel products.”

^ No adjustment on a non-GAAP basis
Intel expects revenue to be approximately 71.5 billion in Full-Year 2019 with an an operating margin of 32% and a tax rate of 13.5%. Capital spending is slated to be around $15.5 billion.

*Intel’s Business Outlook does not include the potential impact of any business combinations, asset acquisitions, divestitures, strategic investments and other significant transactions that may be completed after January 24, 2019. Actual results may differ materially from Intel’s Business Outlook as a result of, among other things, the factors described under “Forward-Looking Statements” below. Our guidance above reflects the divestiture of Wind River, which was completed during the second quarter of 2018.