With the earlier, limited launch of the Galaxy Note Edge and the subsequent launch of the Galaxy S6 Edge, Samsung changed the way we look and interact with our devices. The Galaxy S6 Edge will now let you keep a tag on various notifications and contacts through its special curved edges and end up efficiently use space in the process. But looks like Apple's also been thinking about the edges on a smartphone for quite a while now, with new patents uncovered today that were filed back in 2013.

Apple's been granted some interesting patents today by the US Patents and Trademarks Office today. While conceptually the same as the curved sides on the Galaxy S6 Edge, Apple's patent allows for a greater shift in functionality performed by a smartphone's edge. Apple's sidewall display patents show that the company has applied for trademarks on a technology that will allow the side of future iDevices to come with flexible touch input options. 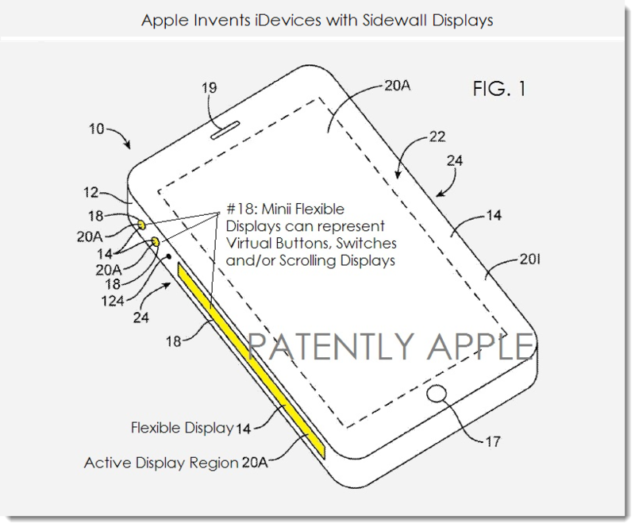 Simply speaking, Apple's technology will let the sides of the iPhone display different virtual buttons, depending on what function the user is performing on the device at the moment. So, if you're listening to music, then your phone's side will be able to display various options such as play, pause, next and previous song. If you're on a call, then you'll be presented with options generally presented on the screen of the phone. It'll work through flexible displays mounted under a transparent display layer cover, which will also most likely include a touch sensitive layer.

Sounds an interesting take on the whole smart edges for the device concept. While Apple has only been granted the patent today, the beginning trend of edge functionality on devices should be the one that many makers might consider to latch on, if it becomes more popular. Will Apple be one of them too? We'll find out. Stay tuned.