On Apple’s website, the company has issued a statement concerning a voluntary recall for certain two-prong AC wall plug adapters due to the threat of electrocution to the user. Here are the details.

According to the information present on Apple’s website, the AC wall chargers have been designed to be used in the following regions:

The reason why the company has issued a voluntary recall is due to the risk of electrical shock if touched. While the cases are very rare in which an individual will actually get electrocuted, Apple is definitely showing why it is regarded as one of the top-tier firms in providing the best possible after-sales services to consumers worldwide. Additionally, Apple has strictly advised customers to stop using affected plug adapters. As compensation, the company is offering a new, redesigned adapter for free to affected customers. Apple states the following on its exchange program page:

“Customer safety is always Apple's top priority, and we have voluntarily decided to exchange affected wall plug adapters with a new, redesigned adapter, free of charge. We encourage customers to exchange any affected parts using the process below.

Note: Other wall plug adapters, including those designed for Canada, China, Hong Kong, Japan, United Kingdom, and United States and Apple USB power adapters are not affected by this program.”

Apple has also provided instructions on how you can identify your AC wall charger in order to see if it requires replacement or not. The company details this in the following paragraph:

‘Compare your adapter to the images below. An affected wall plug adapter has 4 or 5 characters or no characters on the inside slot where it attaches to an Apple power adapter. Redesigned adapters have a 3-letter regional code in the slot (EUR, KOR, AUS, ARG or BRA).’

If you want to know more information regarding the exchange program, then simply visit the Apple's AC Wall Plug Adapter Exchange Program on a step-by-step guide on how to get the best possible and hassle free exchange for your adapter. 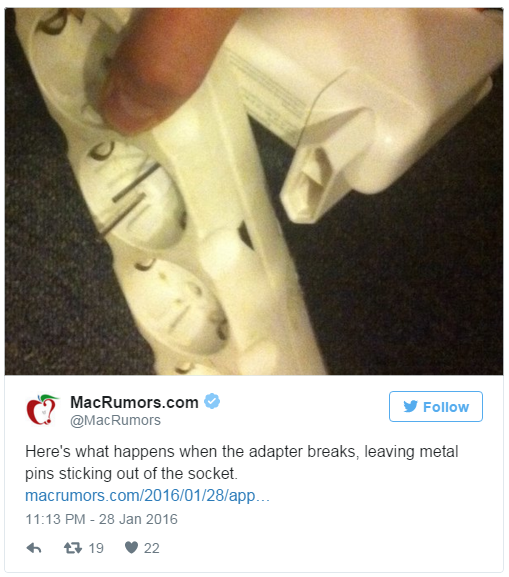