While this really doesn’t affect us local people here in Pakistan, citizens in America would be glad to know that the iPhone-4-coming-to-Verizon rumors are getting stronger and stronger everyday. In the latest from Dvice, one inside source claims of a new Verizon iPhone 4 which will have a faster (if only slightly so) processor, a dedicated internal camera and a larger screen. 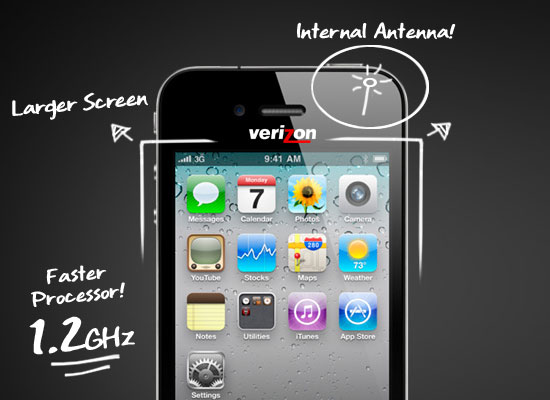 Dvice is quoted saying, “from the source, who has seen and played with the varying Verizon iPhone prototypes over the last few months, it appears the Verizon iPhone will have an internal antenna, at Verizon's wise insistence”. Furthermore, “The phone will have a screen larger than the iPhone 4, probably the same size (3.7 inches) as on the Droid 2... [...]... Finally, it will have a faster processor, probably a 1.2GHz”

I personally think this is unlikely… only for now. For all I know, Apple and AT&T’s exclusivity deal ends in 2012… till then, our American geek-brothers and geek-sisters should make do with AT&T.