We are just a couple of weeks away from the announcement of Apple's next generation iPhone. However it is not the only device Apple fans are anxiously waiting for. The elusive iPad Mini is also expected to be announced at the very same event. Much has been said and written about this device and according to a new wave of rumors, the iPad Mini could closely resemble the iPod touch. 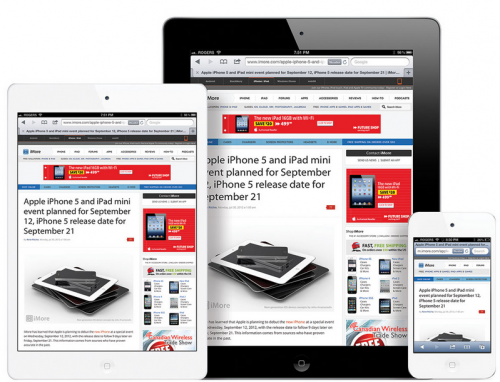 iMore posted a mock up of the iPad Mini, based on information from various reliable sources, online today. According to the mock up, the depth of iPad Mini will be similar to that of the iPod touch which is 7.2mm. This is significantly thinner than the full fledged 9.7 inch iPad. The bezel around the display of iPad Mini is expected to be quite thin, another design element borrowed from iPod touch.

These subtle changes are not only great design elements, but they also make one handed operation of the device a breeze. The iPad Mini is also said to be considerably lighter than the full fledged iPad. Furthermore a low resolution display is expected to be incorporated in this device. A Retina Display can be ruled out because it is too expensive and would not aid Apple's goal of achieving a $200 to $300 price point for the iPad Mini.

Apart from that, the iPad Mini is said to tout a back camera, a smaller dock connector like the next iPhone and aluminium back housing with rounded edges. 200 × 135 x 7.2 mm are the expected dimensions of iPad Mini. These new rumors have been confirmed by quite a number of sources, including John Gruber who has a pretty good track record with these things.

Previous rumors suggest that Apple will announce iPad Mini at the next generation iPhone event however it will begin shipping these devices a couple of weeks after that. It is believed that Foxconn Brazil will be exclusively mass producing iPad Mini devices.