Apple launched its much hyped iPad last month and as the buzz was high in the air, it sat down as soon as people saw what was revealed. An enlarged version of iPhone. Well, for one I was disappointed, if not the functionality but of the form factor alone. Anyway, Retrevo Blog did an online survey amongst it own readers and expected results were shown.

There was a major shift in people who knew about it and were interested but they are not interested in buy iPad any more. This major shift may have been due to the reason already mentioned above plus the high 3G connectivity cost and also people might not have seen a value for money for carrying a screen around as net books are cheaper and somewhat offer better value for money.

Now having said that, don't go on what the charts tell you. Let's analyze what it says. Firstly it was based on 2 questions. First being the pre-launch survey, that is, if the people have heard about iPad which was to be launched and would they buy it. 35% did not know about it nor they were interested and 25% knew about it but they were not interested. A total of 61% not interested in buying the iPad. 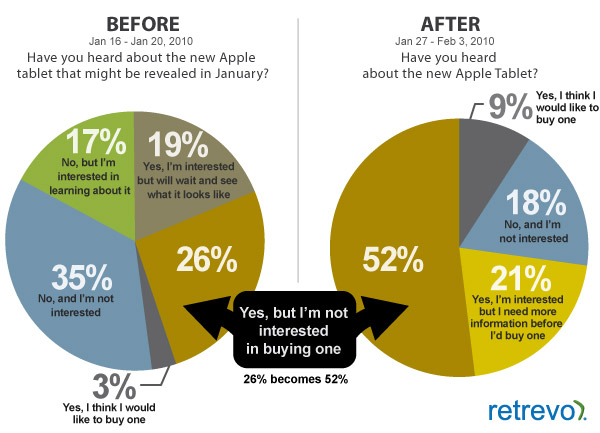 The second question was post-launch and same theme, that is, if people know about iPad and whether they were interested in buying one. 52% knew about it and they were not interested and 18% did not know about it and they were still not interested. That comes to 70%. A total of 9% gain. But if you look at the figures of people who wanted to buy it, it went from 3% in pre-launch to 9% in post launch. Along with this there were 19% who wanted to wait and see what it looked like to 21% who wanted to know more before making the purchase. If we put the interested ones and the ones who wanted to buy iPad in single category, it comes to 30% in post-launch as compared to 22% in pre-launch.

You can check out the complete survey on Retrevo website.