Apple has been ranked number 3 in this year's Fortune 500 companies list, seeing significant gains over previous rankings since 2010.

Apple Sits At Number 3 Spot In This Year's Fortune 500 List Of U.S. Corporations

Apple saw a relatively rough patch last quarter when it announced for the first time that the company is seeing a dip in iPhone sales across the world. But luckily, that didn't stop Apple from climbing to the top 3 spot in this year's Fortune 500 list.

The ranking is based on gross revenue, with Apple seeing a gross revenue of $233,715, with the list being topped by Walmart and Exxon Mobil at first and second place, respectively.

Apart from Apple, many other tech giants are there as well in the Fortune 500. For instance, Amazon sits at the 18th position, HP at 20th, Microsoft at 25th, IBM at 31st, Alphabet at 36th, Intel at 51st, Qualcomm at 110th, and Facebook at 157th. The likes of AT&T and Verizon are also in the list as well. 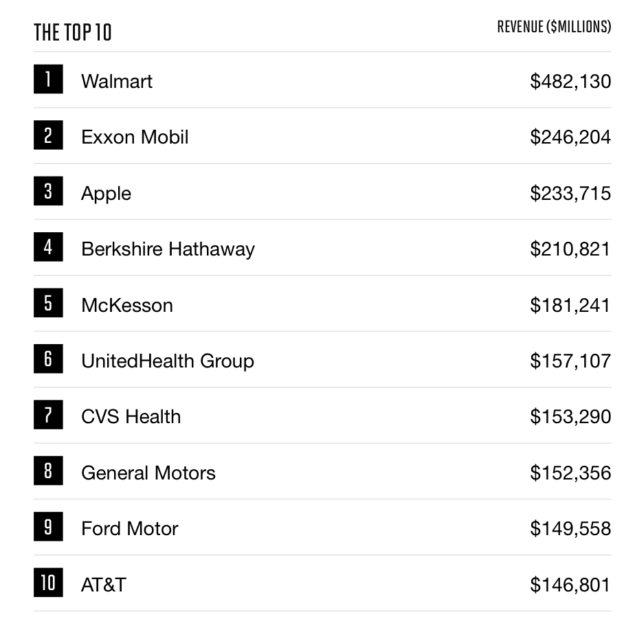 Interestingly, if you look at the top 10 companies in this year's Fortune 500 list, you'll come to realize that there are only two tech companies. The first one is Apple itself, of course, and the second one is AT&T that sits at the 10th position. We really wish there were at least 3 tech companies dominating the top 10, but it seems as though we have to wait next year for this to happen, perhaps.

If you want to check out this year's Fortune 500 list in its entirety, then simply head over to this link right away. There are a lot of interesting companies in the list, and it's a great way to get up to speed regarding what's going on in the business landscape.

Coming back to Apple, it remains to be seen whether or not the iPad Pro or iPhone 7 will change the fortunes for Apple this year, or the next. Even if it does, will the new pieces of hardware boost Apple one step above its current Fortune 500 position? We doubt it. Until or unless Apple releases a real live unicorn, which is of course, absolutely absurd.