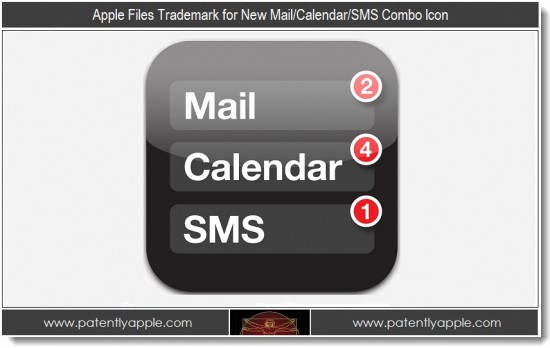 Normally I don't keep track of patents and trademarks, possibly because of the sheer amount of them and also because rarely does any of these ever see the actual light of day. However this new notification system Apple has filed a trademark for may well end up in your iDevice in the near future. The patent Apple has filed for basically attempts at giving your more information as far as your notifications is concerned.

The filing is for Europe and Apple has not been granted the patent yet. If they do I see no reason for this to be excluded in the next iOS update as it looks like a real space saver. Mail/Calendar/messages are my most used apps and it would be nice to have their notifications combined rather than having to search for individual icons. Of course how this is implemented is entirely up to Apple but as far as UI implementations go, Apple rarely disappoints.