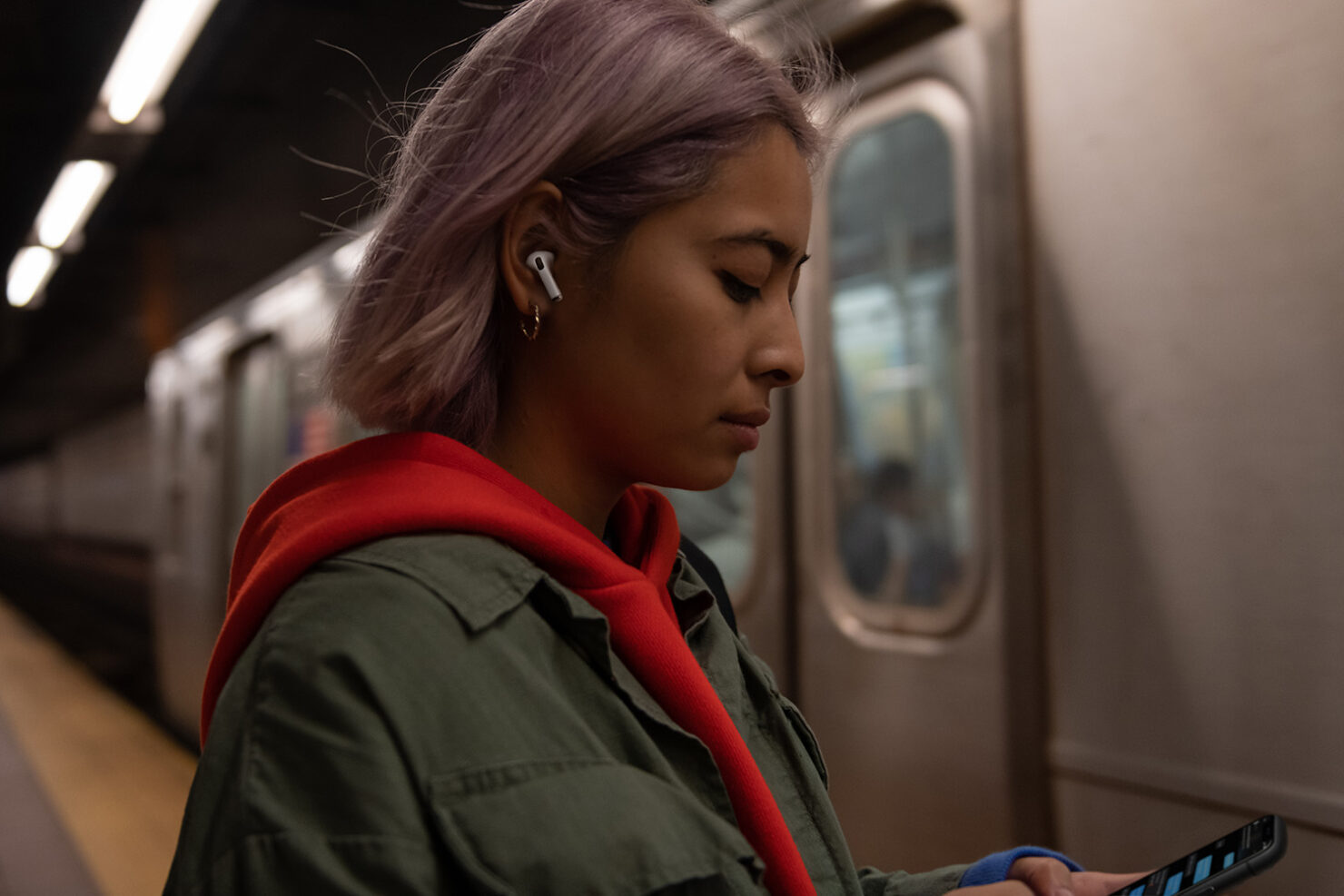 While it's no secret that Cupertino tech giant Apple Inc (NASDAQ:AAPL) has lost traction with the iPhone, the company has nevertheless managed to pick up some of the lost slack through other products. Apple's had a busy 2019 as it has refreshed and launched products belonging to nearly every form factor. Whether it's the MacBook, the iPad, or the AirPods, the company has ensured that folks interested in an iOS or Mac OS device have plenty of options to choose from.

With the holiday season upon us, Apple is gearing up for an important quarter that will set the momentum for the company's fiscal year 2020. Now, data from Evercore International Strategy and Investment shows that while Apple's iPhone has fallen in popularity among teenagers, the company's AirPods have taken its place.

As we head towards 2020, the big thing to watch out for the iPhone is 5G. Apple (NASDAQ:AAPL), following its longstanding practice of waiting before introducing new gadgets or technologies, did not upgrade its 2019 iPhone lineup with the next-generation cellular networking standard. The company's troublesome dealings with Intel and Qualcomm and its love for customization created strong roadblocks against the early rolling out of iPhones with 5G.

Not that it would have gained much by acting hastily. In the United States, 5G is not freely available and estimates of the Chinese market show that shipments of 5G devices this year are less than one-tenth of Apple's reported annual iPhone sales. And now, Evercore's annual holiday survey shows that as the company waits with the iPhone, its AirPods are ready to grow Wearables sales this quarter. 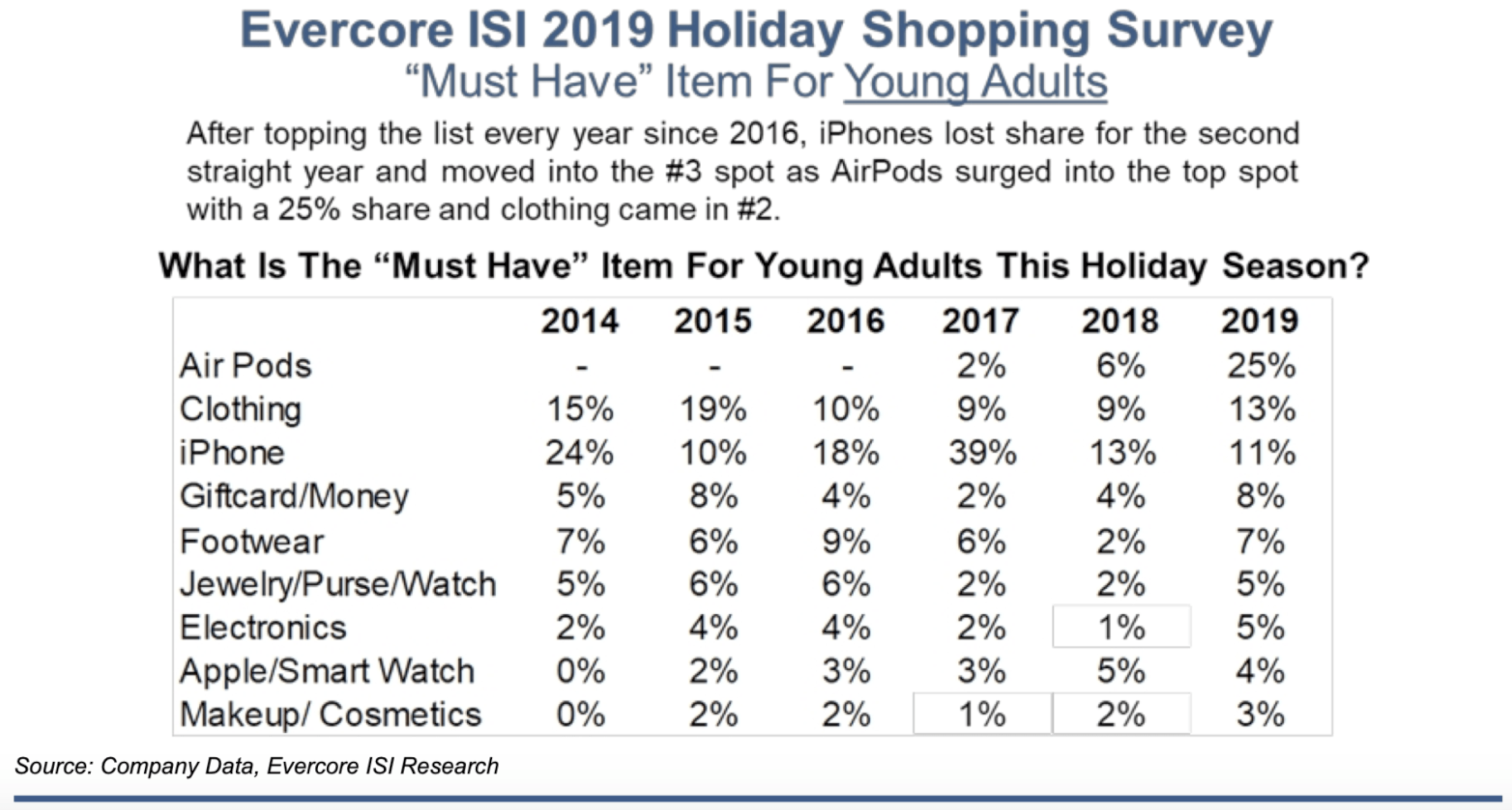 Today's data shows that while the iPhone peaked in popularity for buyers aged 20 to 25 years old after the iPhone X, 8 and 8 Plus were launched, the device has since then gone down. This fact is also reflected in Apple's annual revenues from the iPhone, which dropped by $23 billion in its fiscal year 2019. Now, Evercore believes, based on a survey of people aged between 13 to 25 years that the AirPods will prove to be most popular among young adults.

As opposed to results from teenagers (shown below), the AirPods topped 25% of young adults surveyed about their Christmas wish list. The iPhone, on the other hand, fell down to 11% from a peak of 2017 that it exhibited in 2017. At this point, it's also important to note that we have no idea of the population size of Evercore's survey, so it's uncertain if the data reflects actual soon-to-be-buying-habits of the demographic polled.

Additionally, indicating a strong presence in its home territory, almost 90% of all respondents indicated that they would love to get an iPhone as their next device. This stands in stark contrasts to those who are interested in devices from Samsung (5.7%) and Google (2.2%). With 5G around the corner, the results fall in line with Wall Street's expectations from the smartphone in the future. Analysts all around believe that 5G's introduction will grow Apple's iPhone unit shipments, with JP Morgan putting the number at 207 million.

For the AirPods, Bloomberg believes that Apple (NASDAQ:AAPL) will double shipments to 60 million this year, and Citigroup expects the company to earn $10 billion from Wearables this quarter. Apple is trading at a 52-week high of $280.06 at the time of writing, up by 1.77% from Friday's closing and boosted by delayed tariffs on Chinese imports.