At CES 2014, Aorus introduced their brand to the world being dedicated to the PC Gaming scene and offering a range of gaming peripherals and gaming notebooks. This year, Aorus is introducing their latest Aorus X5 gaming notebook which is the first notebook to be announced with the latest GeForce GTX 965M graphics chip and Intel's Broadwell Core i7-5557U (5th Generation Core processor).

From top to bottom, the Aorus X5 Gaming notebook is feature packed. The updated Aorus X7 with NVIDIA's GeForce GTX 970M SLI solution with a 17" display, the brand new X3 Plus which features the GeForce GTX 970M with a 13.9" display and finally, the Aorus X5 with GTX 965M SLI boasting a 15.6" display comes with a 4K IGZO panel which is a TFT (Indium Gallium Zin Oxide) panel incorporating a low-power yet high performance display that minimizes color shift and deliver crystal clarity to gamers. The whole device weighs at 2.5 Kgs while being 22.9mm thick which are good dimensions given the specifications of this beast..

The specifications of the gaming notebook are quite awesome, featuring Intel's Core i7-5557U processor which is the flagaship Broadwell-U chip. The Core i7-5557U is a dual core chip featuring a multi-threaded design. It has a base clock of 3.1 GHz and 3.4 GHz boost clock, features 4 MB of L3 cache, 1866 MHz memory support. The processor is integrated with the Iris Graphics 6100 chip with 48 EUs, a clock speed of 300 MHz (Base) and 1100 MHz (Boost). The chip has a $426 base price tag  and like suggested previously, will be featured in high performance mobility solutions such as the Aorus X5 gaming notebook. The Aorus X5 comes upto 32 GB of DDR3L memory and has Aorus's RAID Xpress 3 x mSATA SSDs support in RAID 0 which can support capacities of up to 512 GB in mSATA and upto 2 TB of HDD space. There's also Killer LAN chip on board which drives a Wi-Fi (Intel Dual Band) 802.11 AC wireless capability.

On the graphics side, we have dual GeForce GTX 965M configured in SLI. We just covered the specifications of the GeForce GTX 965M chip in a separate article detailing that the chip comes with just 8 SMM units on board the GM204 configuration, their are 1024 CUDA Cores, 32 ROPs and 64 TMUs included on each GeForce GTX 965M as per arranged inside the GM204’s graphics processing cluster. Both chips are clocked at 944 MHz + Boost clock while the 128-bit memory bus is configured at a clock of 5000 MHz pumping out 80 GB/s total bandwidth. The dual SLI GTX 965M SLI can pump out 12000 points in 3DMark 11 performance mode which is a 15% leverage over a single GeForce GTX 980M 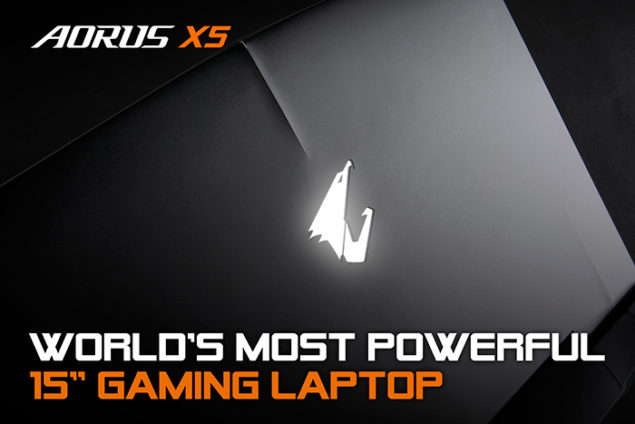 This pair of GTX 965M graphics renders up to P12000 in 3DMark 11, a pure phenomenal score, about 15% above what a single GTX 980M could offer. Experience the extremely smooth gameplay at the highest frame rates and settings; incredibly fine details under ultra-high resolutions are now wrapped in a lightweight and portable design. Built on the triumph of X7, AORUS X5 raised the bar a bit further with the attempt of taking a duo of GTX 965M into a 15.6” chassis that is as tall as 22.9mm. This entire package of formidable horsepower and features previously seen only on desktop systems are now condensed into an ultra-portable gaming platform. Touting a 15.6-inch frame while weighing less than 2.5 kilogram maximum, X5 is simply unbeatable in terms of performance to dimension ratio.

Launching in second quarter of this year, the Aorus X5 gaming notebook will launch at a price tag between $2299 to $2799 depending on the model configuration.