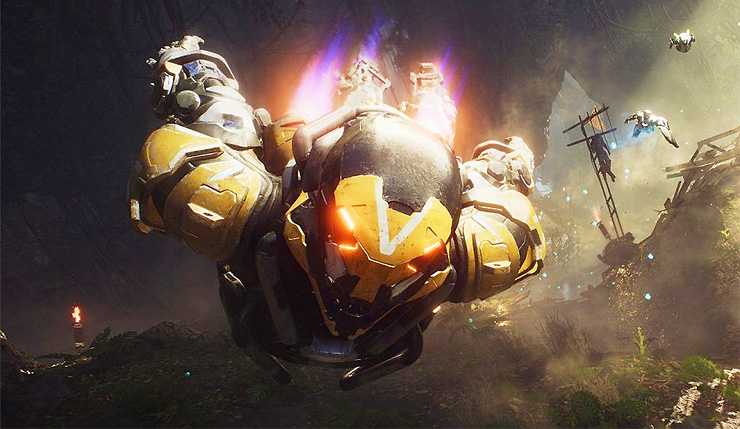 Earlier this week, I got the opportunity to visit EA’s Redwood Shores headquarters to test out BioWare’s upcoming co-op adventure, Anthem. You can read my full impressions here, but I felt the game showed promise, despite some polish issues. In addition to playing a smattering of Anthem missions, I also got to interview one of the game’s producers, Scylla Costa. Mr. Costa has been with BioWare for over a decade, working on everything from Mass Effect 2 to Dragon Age: Inquisition, and was clearly excited for the launch of the studio’s latest project. Scroll on down for key details on Anthem’s story, difficulty scaling, support for NVIDIA DLSS and ray tracing, and more… 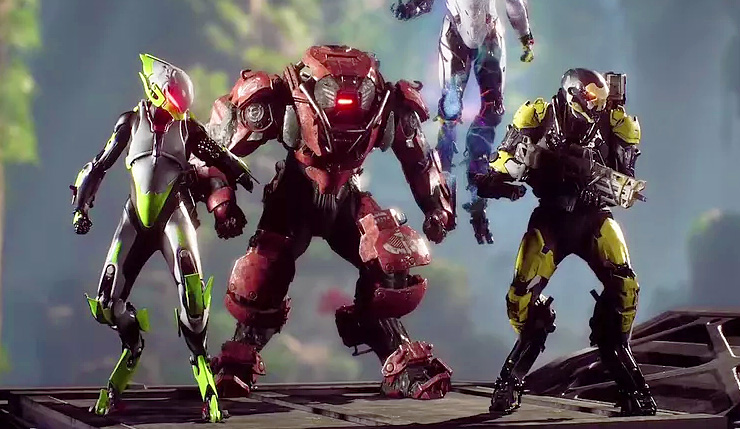 The game is almost here! What’s the mood like at BioWare now that Anthem is finally coming out after, what, five or six years?

We're very excited. It's been more than 10 years since BioWare last created a new IP. It is really challenging to create a new IP, because you have to think years ahead. Just think about, five years ago, we didn't even have Fortnite, right? You have to try to imagine what's going to be in the market five years ahead, and what kind of game you want to make. So, it's very exciting to have the game almost ready.

How do you adapt when big game-changing stuff like Fortnite and Destiny come along?

We didn’t end up changing our approach too much. At the end of Mass Effect 3 [development] we started to think about the new IP that BioWare needed to create, and we wanted to make a game that had a social connection. We also wanted to create something with a sort of sci-fantasy vibe. So, that’s where Anthem came from. It was an interesting challenge for us, but it's been a lot of fun. 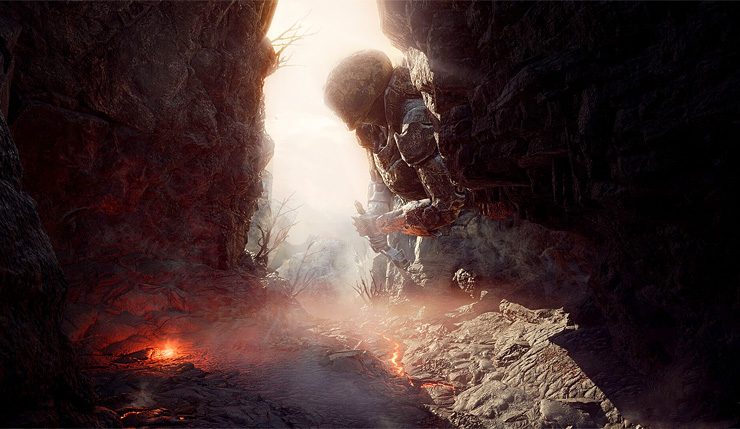 You mention creating social connections, but the game can also be played solo. Would you say there’s an ideal balance between going it alone and playing with others?

Not necessarily, as we want people to play the way they want to play. As we say, "Our World, Your Story," so you can play the expeditions with your friends or even random people. If you want to play by yourself, you can just play private matches the whole game. We've given the option to play both ways. Once you're inside Fort Tarsis you can interact with all the different characters you see there. “Your Story” is going to advance in whatever rhythm you want. If you just want to go and do a lot of missions in a night, but if you want to just explore and have more conversations, you can do that as well.

It does seem like Freeplay is the best way to collect crafting items. Will playing certain ways be required to progress? 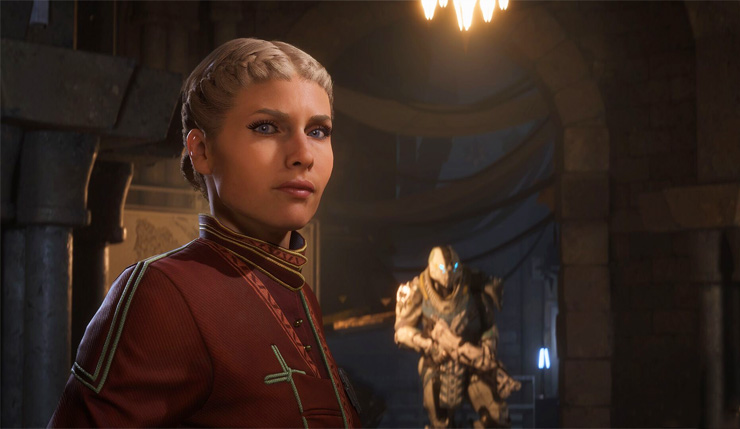 Is there a main story arc to complete? Can you “beat” the game in a traditional way?

Oh, definitely, there is a critical path. You can three main characters in your crew – Owen, Haluk, and Faye. Owen is your cypher who will be communicating with you every time you go on an expedition, and Haluk and Faye, well, you're going to learn more about them as you play the critical path. Also, in Fort Tarsis you're going to find different Agents -- for instance, there's a Corvus agent named Tassyn, who's a very powerful woman. You'll probably want to know more about her. There are other agents -- Brin is a sentinel, Yarrow is a Freelancer, and Matthias is an arcanist. There are three different factions, and the more missions you do for a faction, the more faction points you get and that's going to open up new possibilities for you. So, there are many different ways that you can play the game.

Can the way you choose to interact with these factions have an effect on the game’s narrative?

Again, supporting a certain faction will unlock specific possibilities for you. Also, sometimes the story arcs will cross with each other, if you want to play all those characters you're going to see some…interesting things we're doing that cross one story with the other one. And then you see an overall story arc as well.

How long will it take to complete the critical path?

That's so hard to for us to say, because people play in different ways. There's different ways for you to get to the end. For example, in one point of the critical path, we take you to Freeplay and you're going to have to find a few places in the world and do a few challenges in order to unlock the new section. Some people can do that in an hour, some will take many, many hours. It depends on how much you want to explore and do challenges you come across. So, it's hard to say, but if you want to go more slowly you can, and if you want to stick strictly to the critical path, you can do that.

So, the critical path will include required chunks of Freeplay?

We wanted to make sure that people play all types of content that we have. In two parts of the critical path right at the beginning you're […] taken into Freeplay so you can find some crafting resources. Basically, we're explaining to you, “Hey, this is a good place to get crafting resources.” There is a second one that's more about exploration and finding different places that are sometimes hidden, and it teaches you how to complete challenges that give you [new crafting blueprints.] We also have Strongholds, which are a different kind of content. We unlock Strongholds as you complete the critical path and you can try those challenging Strongholds with your friends. We also have Contracts, which are repeatable missions that some of the agents are going to give you. So, we have a lot of different types of content.

Strongholds have generated a lot of interest. How many of them will players be able to tackle?

You're going to be able to do three different Strongholds, which you should probably be doing in a multiplayer way with three other people. There are multiple difficulty settings once you get to level 30. So there are different horizons of things to chase for, so you can get better gear, better weapons, and find that super-awesome build for your javelin.

How are you managing telling a story, while letting people of different levels play together?

That was a big challenge for us, because we wanted people to be playing with their friends regardless of their level. Basically, the way that the system works, is we balance the game if you're level 1 and I've been playing for three weeks, so we can still have fun together. The damage your deal and take is relative to your level, so that we both can play together. Basically, the advantage for the higher-level player is that you'll have more components. I have more gear, so I have more utility and I can do more stuff.

But the actual numbers are leveled out?

Exactly. They're balanced in a way that you're going to have fun, I'm going to have fun, and it's going to be challenging for both of us. The loot that you get is also separate, so your loot is different from the loot I get. You get loot that’s relative to your power level.

Darn. So, I can’t grab a super high-level weapon right away?

There are various rarities of loot, but you're going to get loot that's relative to your pilot level, within a certain range. We don't want to shortcut a lot of the progression and the fun of [earning things].

But how are you keeping people from shortcutting the story?

Again, it's "Our World, Your Story." So, when you go into a mission you can play with your friends, but when you're in Fort Tarsis it's your hub, and you can have your own story at your own pace. If you’re invited to play one of the first missions in the game, you're going to get rewards for it even if you've already completed the mission. The other way around can also happen -- I can go and play with you in an end-mission game, but it's up to me, because I know it's not going to advance my story, because I'm not there yet. I can play with you, I still get rewards, but it doesn't advance my progress. You can get spoilers if you want to, we're not forcing you to.

How free are you to explore the world, really? Are there limits to Freeplay?

It depends on what you're doing. For example, if you're in a critical path mission or an expedition you got from an agent, we're trying to tell a specific story, and we want you to be within certain boundaries. So if four of us are playing, and one goes really far away, we'll bring you back to a checkpoint. In Freeplay it's very different. In Freeplay there are no boundaries. You can have four players going in every direction they want, doing whatever they want. No tethering there. Strongholds also have checkpoints. 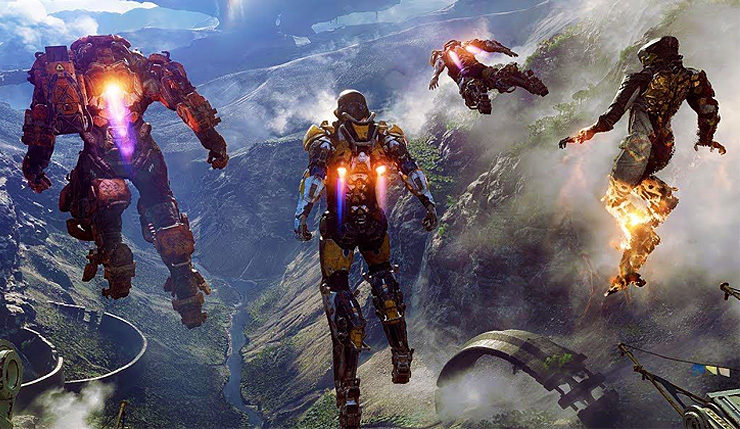 I think you’ve said that the game won’t be running at 60 fps on consoles.

I know somebody said it at some point! Is that something you might be able to target in the future on PS4 Pro and Xbox One X?

Yeah, in the future -- that is a very good question. We need to make sure many parts of the game are running smoothly. It can be done, yes, for the PS4 Pro and Xbox One X in the future.

Are you planning to support NVIDIA tech on PC? Will DLSS be available at launch and could ray tracing be added in the future?

DLSS will be available shortly after launch. It’s possible that ray tracing could be added later, but we don’t currently have anything to announce in that space.

Finally, will the game support Dolby Vision and/or Dolby Atmos?

Many thanks to Scylla Costa and BioWare for answering our questions!

Anthem boosts onto PC, Xbox One, and PS4 on February 22, 2019. Origin/EA Access members can play the Anthem demo today, while everybody else can try it out on February 1.  The demo comes with three invite codes you can distribute to your friends — find out how to claim the codes, right here. Keep it tuned to Wccftech, as we still have hands-on Anthem end-game impressions coming next week!