Anthem Hands-On Impressions: A Sturdy Frame in Need of Some Polish 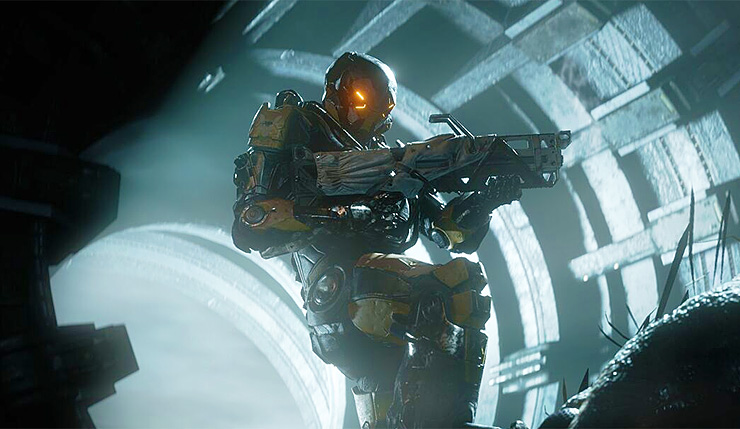 Anthem arrives in less than a month, and yet, there still seems to be a considerable amount of confusion surrounding BioWare’s first new IP in over a decade. People have compared the co-op shooter to Destiny, but BioWare insists the similarities are only skin deep. So, what is Anthem all about? What drives the game? How does it play and flow once you really sit down and delve into its alien world?

Thankfully, I recently got a chance to play around six hours of Anthem at a preview event at EA headquarters. I sampled a few early missions from the full game, tried out the just-released demo, and delved into some end-game content, although we won’t be talking about the latter in detail today. I walked away with a better understanding of what BioWare is trying to achieve, what they’ve done right, and what they really need to work on. Let's blast off into the world of Anthem… 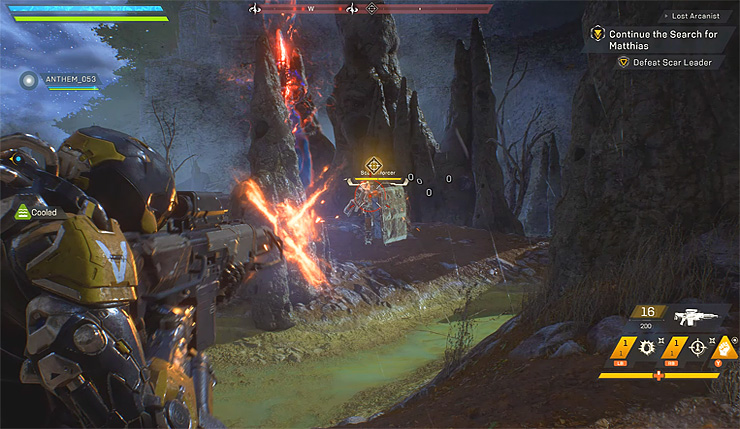 A Rousing Call to Arms

First, the good news – the game’s core action mechanics feel great. I feared I’d be crashing into every rock, tree, and space barn once I donned my javelin suit, as I’m usually pretty awful with 3D flight controls, but cruising the skies is very intuitive. Jump and press down the left stick, and you’re off to the races. Gunplay feels similarly satisfying, with the game serving up a wide array of weapons, from pistols, to rifles, gatling guns, and grenade launchers. BioWare has applied a fair amount of computer assistance to the controls – aiming doesn’t need to be too exact and I think I even caught the game slightly tweaking my flight path to avoid incoming obstacles. Some crusty hardcore types may chafe at the help, but it didn’t feel overbearing. If there’s a real, fundamental difference between Destiny and Anthem, it’s that BioWare’s game is more about the immediately accessible mayhem.

The game’s four javelin classes, the balanced Ranger, the speedy stick-and-move Interceptor, elemental-attack-tossing Storm, and heavy-duty Colossus all feel worthwhile in their own way. Personally, I think I liked the basic Ranger best, because I’m wishy-washy like that, although the Storm and Colossus were good fun as well. The only javelin I didn’t really get a feel for was the Interceptor, although plenty of other players at the preview event swore by it. In addition to blasting baddies with the standard assortment of guns, each javelin can equip special gear that allow them to unleash more powerful attacks and you can also build up an Ultimate Ability which really clears out the area when you unleash it. It feels like there’s a lot of room to master each class, although if you’d rather just gun your way to victory, that works too. 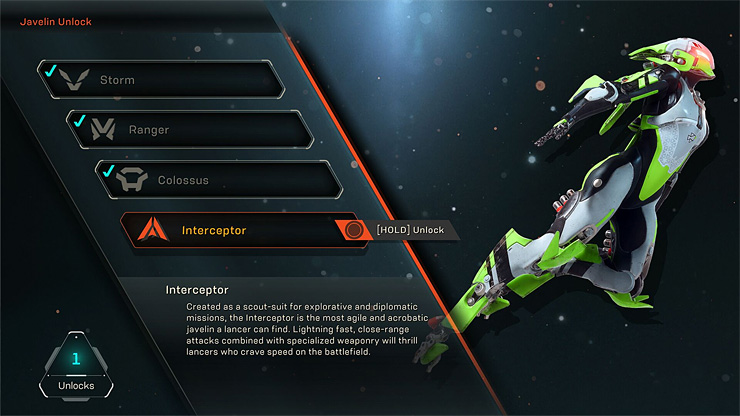 Visually, Anthem is a treat, boating huge, lush worlds and action melees jam-packed with particles, explosions, and all manner of other eye-popping effects. The powerful rigs we were playing on at the preview event were running the game at 1080p and a mostly-consistent 60fps (something that sadly won’t be available in the console version of the game). It will be interesting to see how the action holds up at half the framerate.

Most of Anthem’s missions follow the same beat – fly around the open world following markers and fighting enemy mobs for a few minutes, then delve into a dungeon-like area where you fight more enemies and, eventually, a boss. Ice the big baddie and collect your loot. Despite most missions following a familiar template, each one served up enough new sights and intense action to remain engaging. The co-op focus also elevates things – trash-talking with your pals as you splatter giant spiders is inherently fun. That said, I do wonder if Anthem’s mission structure will continue to entertain longterm. During my playtime, I tackled missions from various points throughout the game, but they all felt rather similar. The same bad guys and mission objectives are encountered time and time again, with later missions simply jacking up enemy stats or the number of things you need to collect to complete an objective. Again, I didn’t get tired of the action during my limited time with the game, but is this the kind of experience players are going to want to sink 100s of hours into? That’s pretty clearly what BioWare is gunning for, but it remains to be seen whether they’ve hit their target. 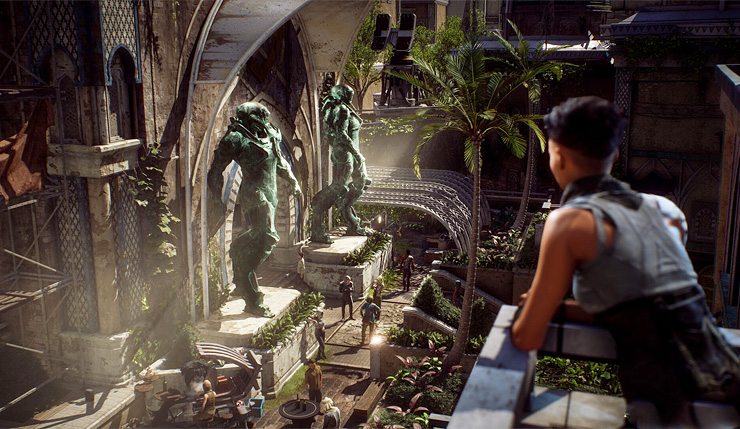 As fun as playing individual missions can be, Anthem’s overall structure remains somewhat confusing and unfocused. Fort Tarsis, the hub area that contains most of the game’s story content, is very limited in scope. The city is essentially just a small handful of storefronts and quest givers, and provides very little in the way of real interactivity. Sure, Tarsis looks nice, but it’s just window dressing. The game’s various menus are also rather difficult to navigate – I spent far too much time simply trying to figure out how to do basic stuff like change my javelin’s colors, craft items, and set up a party. It should also be mentioned that the newly-announced Launch Bay social hub was not available during my hands-on time.

And then there’s Freeplay. I was expecting Freeplay to be my favorite part of Anthem, as what I’d seen vaguely reminded me of Nintendo’s fantastic Xenoblade Chronicles games and other roam-as-you-please RPGs, and yet, I found exploring the open world oddly unengaging. Without mission markers, Anthem’s map is difficult to navigate, and you’re constantly confronted with roadblocks – high-level enemies, punishing storms, and more. Rather than feeling enticed to go out and explore, I almost immediately felt a strong urge to return to the safety of Fort Tarsis and another nice, guided co-op mission. 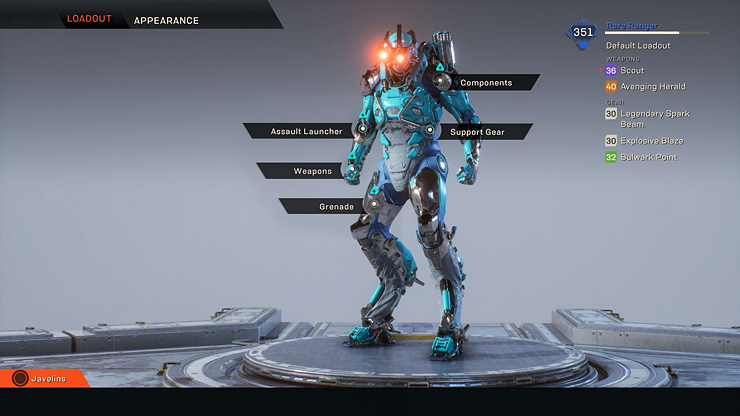 Overall, Anthem just doesn’t feel like a cohesive whole yet. Fort Tarsis and the open world seem like they’re plucked from different games, missions and Freeplay don’t really compliment each other, story is doled out in a rather random way, and I didn’t get much sense of what the ideal way to proceed through the game is. Granted, I only got to play a very scattershot sampling of content, but still, Anthem's gameplay loop remains fuzzier than it should.

Attack of the Space Bugs

We’ve touched on the good and the bad, so now we have to talk about the ugly. The build of Anthem I played was still very buggy. Highlights included a teammate temporarily losing his head during a mission, a persistent glitch that didn’t let me edit my javelin’s appearance, and mission markers either not showing up or pointing my squad in the wrong direction. Oh, and despite BioWare only having to deal with 60-or-so players all sitting in the same room, connection issues were persistent. Yes, this was a pre-release build. Yes, BioWare is no doubt working overtime stomping bugs. Still, it’s hard not to be concerned that the experience was still so rough only a month out from launch. 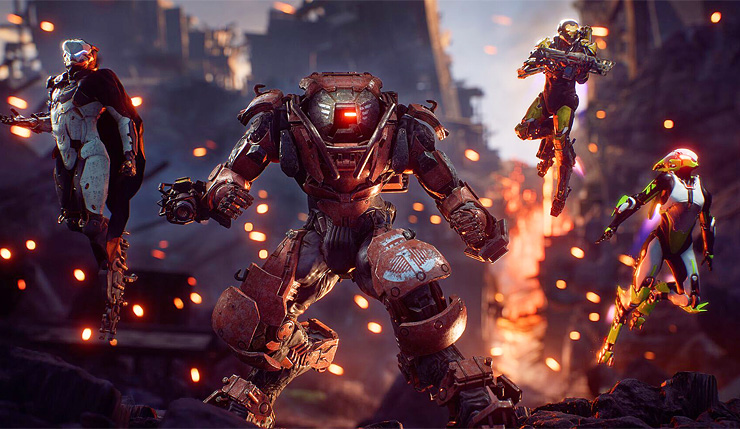 Anthem boosts onto PC, Xbox One, and PS4 on February 22, 2019. Origin/EA Access members can play the Anthem demo today, while everybody else can try it out on February 1.  The demo comes with three invite codes you can distribute to your friends -- find out how to claim the codes, right here. Keep it tuned to Wccftech, as we have an exclusive interview with one of Anthem’s producers and end-game impressions coming your way over the coming week!