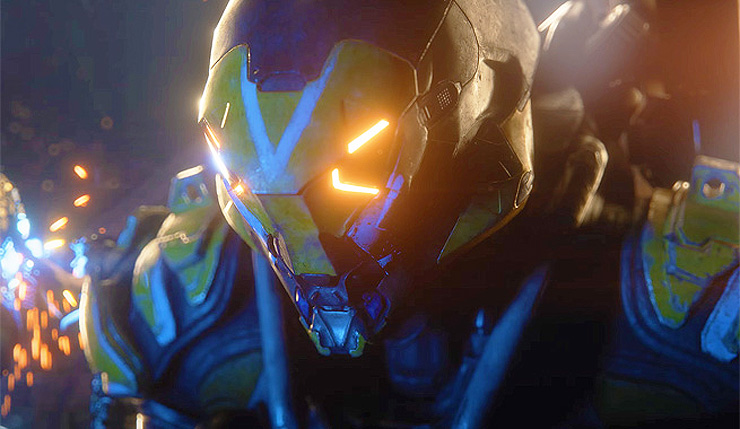 Last year, EA and BioWare wowed us with a first look at their new open-world online RPG, Anthem, but fans were left wanting more. Thankfully, we got more at this year’s EA Play Live Press Conference, including a deeper look at the game’s story and gorgeous world, and details about the game’s shared-world multiplayer. We also got a release date! But first, check out the new E3 2018 Anthem trailer, below.

After showing the trailer, Anthem executive producer Mark Darrah, lead writer Cathleen Rootsaert, and BioWare general manager Casey Hudson sat down to share some more info about the game. Rootsaert provided some new detail about the game’s story and world:

“The premise of Anthem, is a world left unfinished by the gods. But the gods left behind their massive tools, and those tools are in constant conflict with this unknowable force called the Anthem of Creation. And the chaos of those things pushing against other means the world is constantly being reshaped in new and unpredictable ways.

You are a Freelancer, uniquely equipped to pilot the Javelin exosuits. You need those suits to survive and fight in this world. On top of that, our ancient rivals the Dominion have discovered a way to weaponize the Anthem of Creation, so we need to stop them and protect the free people of Tarsis.”

Interestingly, Rootsaert also hinted there will be plenty of story DLC in the pipeline...

“We're also designing it so we can add story for years to come. [...] It could be anything -- a new moment with a character you've grown to love, an event in the world that deepens the lore, or a new storyline.”

Mark Darrah went into some depth about how Anthem will mix storytelling and co-op multiplayer (the answer being, it won’t really):

We've tried to build a solution [for combining co-op and single-player] in Anthem. It's what we call 'our world, my story.' So, when you're out in the open world […] this is where other players get to play with you. This is a living shared world. Whether there's unique weather, or it's nighttime, what you're experiencing, you're experiencing together. Everyone playing Anthem is seeing the same thing. This is what we mean when we say, 'our world.' It's a shared world we all experience together.

When I finish a mission, I come back to a base, like Fort Tarsis, and this is a single-player experience. I turn in my rewards, I talk to some characters, I experience the consequences of my actions. By doing that, we're able to combine that impact and agency of a single-player story with the fun of teaming up with your friends to play co-op in combat."

Finally, we got a look at the four classes of Javelin exosuits Anthem will launch with, including the Ranger, Colossus, Interceptor, and Storm. The Ranger is your all-rounder, while the Colossus is a heavy hitter – no details about the Interceptor and Storm were shared. Of course, you’ll be able to fully customize your Javelin suits, and some cosmetics can be purchased with real money, but the game won’t have loot boxes. 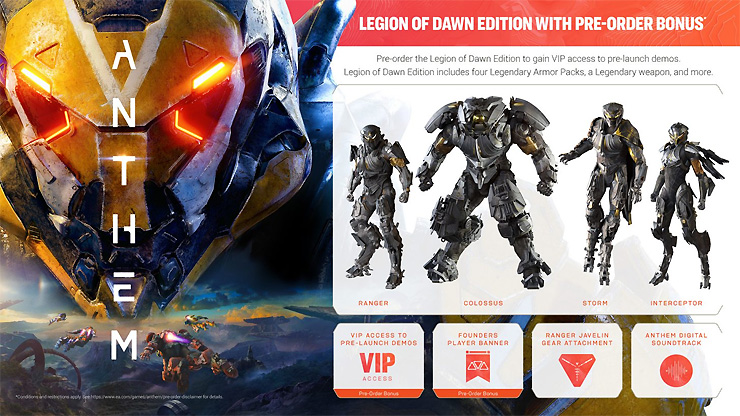 EA and BioWare also provided some details about Anthem's pre-order bonuses, and the Legion of Dawn Edition, which will set your back $80.

Players excited to enter the dangerous world of Anthem are now able to pre-order the game. Those who do will receive VIP demo access and a unique in-game Founders banner. Those who pre-order the Anthem standard edition will also receive a legendary weapon and the Legion of Dawn Armor Pack for the Ranger Javelin as part of their pre-order content.

Anthem boosts onto PC, Xbox One, and PS4 on February 22, 2019. Origin Access Premier members will be able to play the game a week early on February 15.