The third Android Q beta was launched yesterday for a host of Pixel and non-Pixel devices. The beta brings many changes and one of the most prominent ones makes it a lot easier to access Wi-Fi passwords stored on your device. Until now, one had to rely on third-party apps (or ROMs) to share WiFi passwords via a QR Code. Sharing it via plaintext was not possible either.

In Android Q, Google is changing that. When you tap on the settings for any Wi-Fi network you are currently connected to or have ever been connected to, there’s a sharing option. This requires your device’s PIN or a fingerprint to access, but once you have, you’ll see a QR code for automatically connecting to that network as well as the Wi-Fi password itself in plain text. 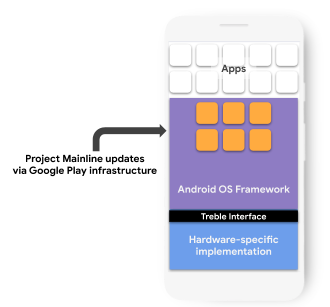 Project Mainline picks up where Treble left off by making it easier for updates to change core OS and help updates deliver quicker. Project Mainline will allow Android security updates to be delivered apps, sort of like APKs. Google can use APKs and APEX files to distribute new versions of those core OS components via the Play Store, allowing them to be installed without needing a full system update. Google also promised at I/O 2019 that it would be possible to install them without a reboot of the device. But in all likelihood, you'll need to reboot your device for the changes to take effect.

Project Mainline will likely need OEMs to build support for it into their software, and they'll have to accept handing off the responsibility for more of these core Android components to Google. Considering the state of Android fragmentation, Google may have to 'incentivise' OEMs to support Project Mainline on their devices.

In the latest, Android Q beta apps running in the background can no longer launch activities. The idea behind the change is to keep apps from opening due to an unrelated service. The change will affect background services designed to launch activities. For those who use apps such as Tasker, there is a way around the conundrum. Head over to developer options and switch on "Allow background activity starts." to reverse the effects.