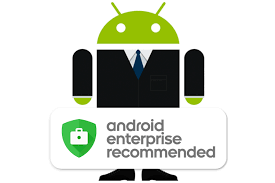 Google announced the "Android for Enterprise" initiative earlier this year. The enterprise market had been largely occupied by Apple as corporations shied away from Android owing to a variety of factors including irregular security updates and the inherent open-source nature of the platform. Apple still holds a majority of the market share, and it'll be a long time before Android makes a significant impact.

The Android for Enterprise program certifies devices fit for use in an enterprise environment based on several factors such as minimum hardware, OS support and provisioning specifications. Each device must receive at least one major OS upgrade and five years worth of security updates. Several devices from manufacturers ranging from Nokia to Huawei are already certified, and more devices join that list constantly. Today a new, unique set of devices joined the list.

The requirements for rugged phones are slightly different than those for traditional Enterprise Recommended device. Android 7.0 is the minimum OS version, and there has to be a SoC clocked at 1.3GHz, 2GB RAM and 16GB storage. One major OS update is also promised (within 18 months of the board support package release).

The phones must have an Ingress protection rating of IP64 or higher, and survive repeated drops on concrete from a height of four feet (MIL-STD-810G or IEC 62-2-32). They are also guaranteed to have security updates for five years - that's two more years than what is promised for non-rugged devices.

There are 11 rugged devices currently in the program, with more coming soon:

Do you recognize any of the names above? I don't. Most of the devices are for a niche audience and are for people who work in hazardous work environments where a garden-variety smartphone would perish.