The newer Android version 2.2 actually has a browser and speed that surpasses the ones of the very brand new iPhone 4. This is speaking of a 6 month old, Nexus One, that not only has this but also accompanies Flash, unlike the iPhone 4. The Google I/O was totally hyped about this, and had predicted such results in comparison with  an Apple iPad. While the iPad runs a third generation Apple iOS, the newer iOS 4.0 is run by iPhone 4 which too has befallen the very same fate as its counterpart, the iPad. 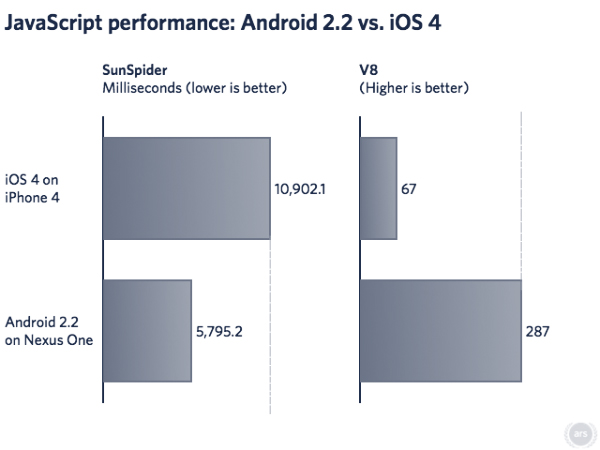 Seeing the above tests, it is no surprise, that the Android annihilates iPhone 4 in a battle against speed and power. According to the tests, the Android easily renders the Javascript pages and all unlike the iPhone 4 which does not come in par with it. To prove these tests forehand, the fellows over at Engadget actually compared both of these devices with real live tests and proved that indeed, the Android was a much better OS. This could very well be a vital key for Google, in them overcoming Apple's domination over the market.