In case you are a HTC Sensation user and were waiting for some Android 4.2.1 Jellybean treat on your phone, then your prayers are going to be answered soon. No, we are not referring to the official Sensation Android 4.2.1 upgrade, however, the developers at XDA are at large constructing Android 4.2 Jellybean based CyanogenMod ROM 10.1 for your pleasure. The development is coming along smooth so far with an initial release already at disposal to try out for your self.

Bruce2728, Senior XDA member with a recognized developer tag, is burning the midnight oil to bring HTC Sensation at par with other latest Android counterparts. Of course HTC Sensation was released by HTC and carrier to spur much awaited “sensation” among the Android fan club, and it’s a brilliant phone. However, some early hardware faults and other stuff didn’t make it an Android sweetheart for many. But there are folks who love their phone and want to stick to it for sometime. 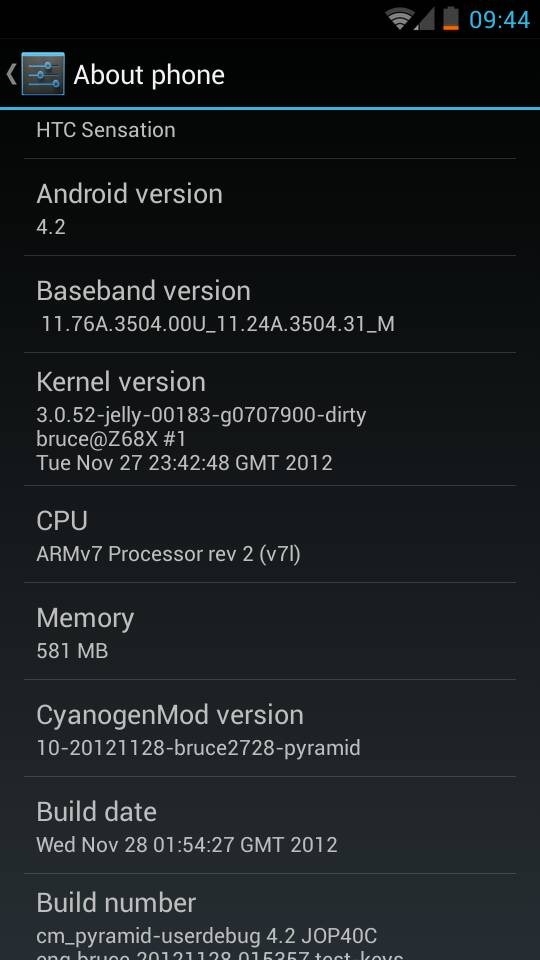 According t Bruce2728, this is an early Kang build of CM 10.1 for the HTC Sensation. The build comes with some faults and won’t be your daily driver if you want camera, bluetooth and Audio. Absence of these essential features conveniently point to the fact that this build isn’t for the weak at heart; but is a treat for flash-junkies and those who like to code for Android. Another fact is that this build is under consistent development and we may be able to download and flash a stable CM 10.1 Kang sooner than expected. But before that, keep off if you don’t know what you are doing or your love stability and features on your HTC Sensation.

So how to get this build? Pretty easy! All you need is to head to the official XDA development thread for Kang CM 10.1 Android 4.2.1 JellyBean dedicated to Sensation and get the goodies. The thread has clear directions regarding what works and what doesn’t. So in case you flashed it for stability or as your daily driver; your phone might turn into a zombie or go bonkers.

And if you fancy developing for Android or flash-junkie with hardcore knowledge of flashing, reverting and Nandroiding plus restoring; then you must give this a try.

So go ahead and grab the goods! Do share it with us how it went so we can also seek your help and expertise in compiling a great tutorial for the betterment of HTC Sensation kind.