It should not come as a surprise but Google is dedicated to Android, and while the world waits for Android 12L to be official, Google is currently working on the next major release which will be Android 13 or Tiramisu if you want to go by the codename. There is not much known about the upcoming Android version but based on the latest tip, the new version might feature a tap to transfer feature for media playback.

AndroidPolice has shared a Google UI demo mockup for a new feature in Android 13 and it is labeled as a "Media TTT" workflow. The "TTT" part is "tap to transfer." The shared screenshot shows a small message at the top of the display that reads "Move closer to play on DEMO" in one image and "Playing on DEMO{" on the other. The second popup also shows an Undo button, which would let you stop the music from playing on another device if you have ended up doing so unwillingly. 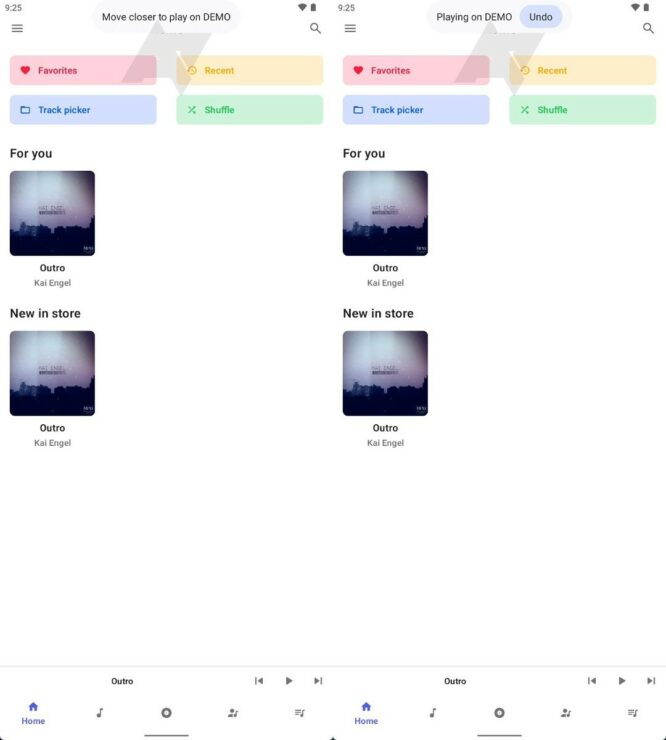 Currently, there are no other details available aside from what you see in the screenshot shared above. The feature could work similarly to the 'Hand off audio' feature on Apple's HomePod smart speakers and for those who don't know, it allows you to hold an iPhone or iPod Touch close to the HomePod to set the speaker as the output. The feature uses a combination of Wi-Fi and Bluetooth but at the moment, we are not sure the implementation that Google will be going for and whether or not something like this makes its way to the final version of Android 13.

As far as the release date for Android 13 is concerned, we are expecting the update to roll out in the fall of this year with the developer previews and beta releases being announced in the coming month.

Android 13 could end up being more of a feature drop than a full-fledged revamp but as long as Google is dedicated to adding more features that improve the user experience, we cannot really complain. The tap to transfer feature does look useful and will make media playback even more convenient.