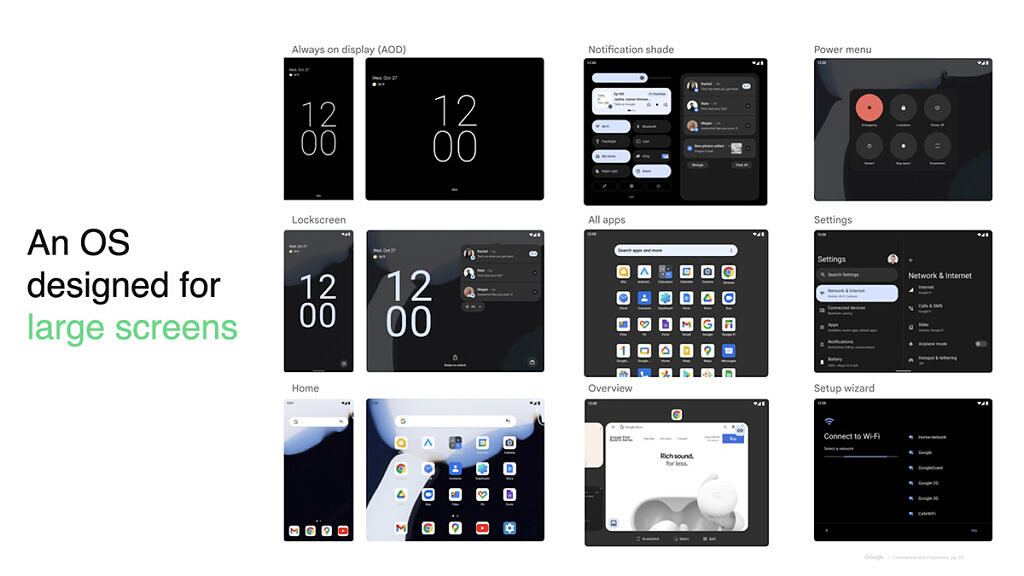 At the Android Dev Summit today, Google has officially announced Android 12L, a feature drop for Android 12 purpose-built for large screen devices. The new version of Android brings new APIs, tools, and guidance that will help developers optimize their apps for large screen devices such as foldable, tablets, and Chromebooks. It brings a lot of UI refinements to make Android more usable on larger screens.

For instance, on devices with screens above 600dp, the notification shade, lockscreen, and other system surfaces use a new two-column layout to make the most of the extra screen real-estate.

With Android 12L, Google has also worked on improving multitasking and making it more powerful and intuitive. The update brings a new taskbar on large screens that will let users easily switch to their favorite apps like they would on desktops. The new taskbar also helps users easily view two apps in split-screen mode. The new Android version automatically enables all apps to enter split-screen mode even when they cannot be resized.

Additionally, Google has improved the compatibility mode with visual and stability improvements in Android 12L. These improvements offer a better letterboxing experience and make apps look better by default on large screens. Google is also giving OEMs tools that they can use to customize letterboxing and allowing them to set custom colors or treatments such as adjusting the position of the inset windows, applying custom rounded corners, and more.

You should also know that the Android 12L will likely include more changes than what Google has revealed. Google is planning on releasing the update earlier next year, just in time for the next-gen Android 12 tablets and foldable devices. The company is said to be working with OEM partners to bring these new features to large-screen devices. For all the app developers, Google has already released a developer preview build of Android 12L. You can try the preview by downloading the Android 12L Emulator images and tools.