With Android 11, Google aims to take care of the storage situation by bringing in a feature called "Scoped Storage". This feature was introduced back in Android 10, but has been changed time and again since its initial release. With Android 11, however, Google is enforcing this feature for apps that are API Level 30, which happens to be the latest API level on Android 11.

Android 11 Brings an Improved Scoped Storage, Making it Easier For You to Manage Your Device's Storage

Thankfully, instead of going into details all over again, Google has issued a graphic that pretty much sums up how this Scoped Storage feature is going to work on Android 11. 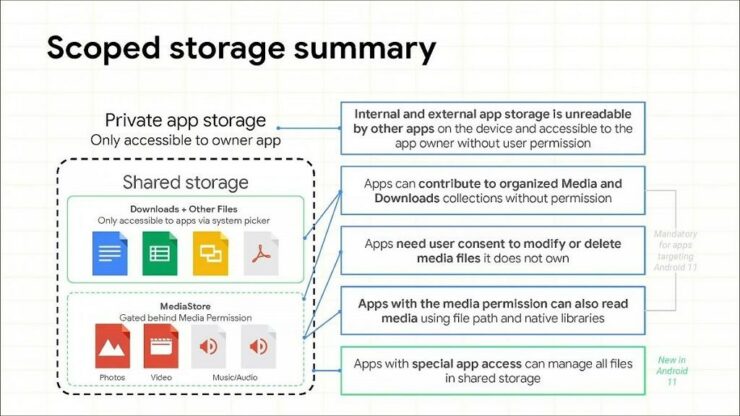 If you want to know more about this, you can check Google's video detailing how the privacy is going to be handled on Android 11.

Android 11 is going to bring a mechanism called trashing. This feature will let the apps that use MediaStore API to trash a file instead of deleting them. This is done to make sure that the user has a chance to actually go ahead and recover the file in case they need it. This works a lot like how the recycle bin does on our computers. However, this trashing feature is hidden by default. According to Google, apps that have the edit access to trash files will be able to display the files upon prompting. Items that are trashed will be deleted after 30 days.

Android 11 is also going to require apps to get prompts from the users before they modify any media file that is not owned by the app itself. Additionally, Android 11 will also bring another feature called the favourites. This feature will allow the user to set the status of the media as favourite, but this time around, every media app will be aware of the fact that the file is flagged as important or favourite by the user.

If you want to know more about how Scoped Storage works, Google has a very good video that will allow you to gain as much information as you want.

If you are interested in trying out Beta 1, you can head over here and get started.