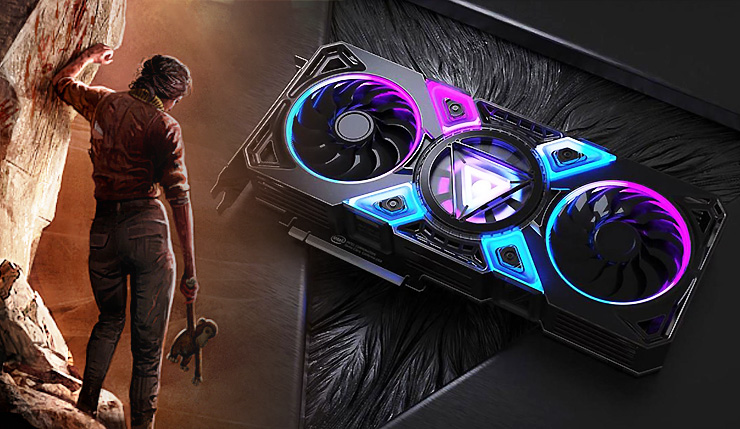 A couple months ago Intel announced they were getting into the gaming GPU race with the Intel Xe HPG, a mid-level card offering features players will care about like speedy GDDR6 memory and support for ray tracing. Intel hasn’t shared many details about the Intel Xe HPG, but here’s what we know so far…

This Intel Xe HPG GPU is another category within the Xe micro-architecture family. It falls between the Xe-LP and Xe-HP and is targeted primarily at the gaming audiences. The Xe-HPG GPU is expected to use a single tile and assuming that a single tile consists of 512 EUs, we are looking at up to 4096 cores on the flagship chip. […] As for the gaming-specific features, the Intel Xe-HPG powered graphics cards will feature hardware-accelerated ray tracing and feature GDDR6 memory to optimize performance and value.

The Intel Xe HPG isn’t supposed to come out until sometime in 2021, but surprise surprise, the soon-to-be-released horror game Amnesia: Rebirth lists the card amongst its system requirements.

Hmmm, very interesting! The system requirements are definitely a bit odd, as the Intel Xe HPG is listed alongside the rather dated NVIDIA GTX 680 and Radeon RX 580 cards. While it won’t be a super high-end GPU, the Intel Xe HPG will undoubtedly be more powerful than those cards. Assuming this isn’t just an error (these system requirements have been up for several hours now), it seems like Amenia: Rebirth developer Frictional Games may already have their hands on an Xe HPG and simply tossed it into their system requirements because they happen to be testing it. Hopefully this is a sign the card is coming sooner rather than later.

Amnesia: Rebirth launches tomorrow (October 20) on PC and PS4. You can check out Wccftech’s full 8 out of 10 review of the game, right here.