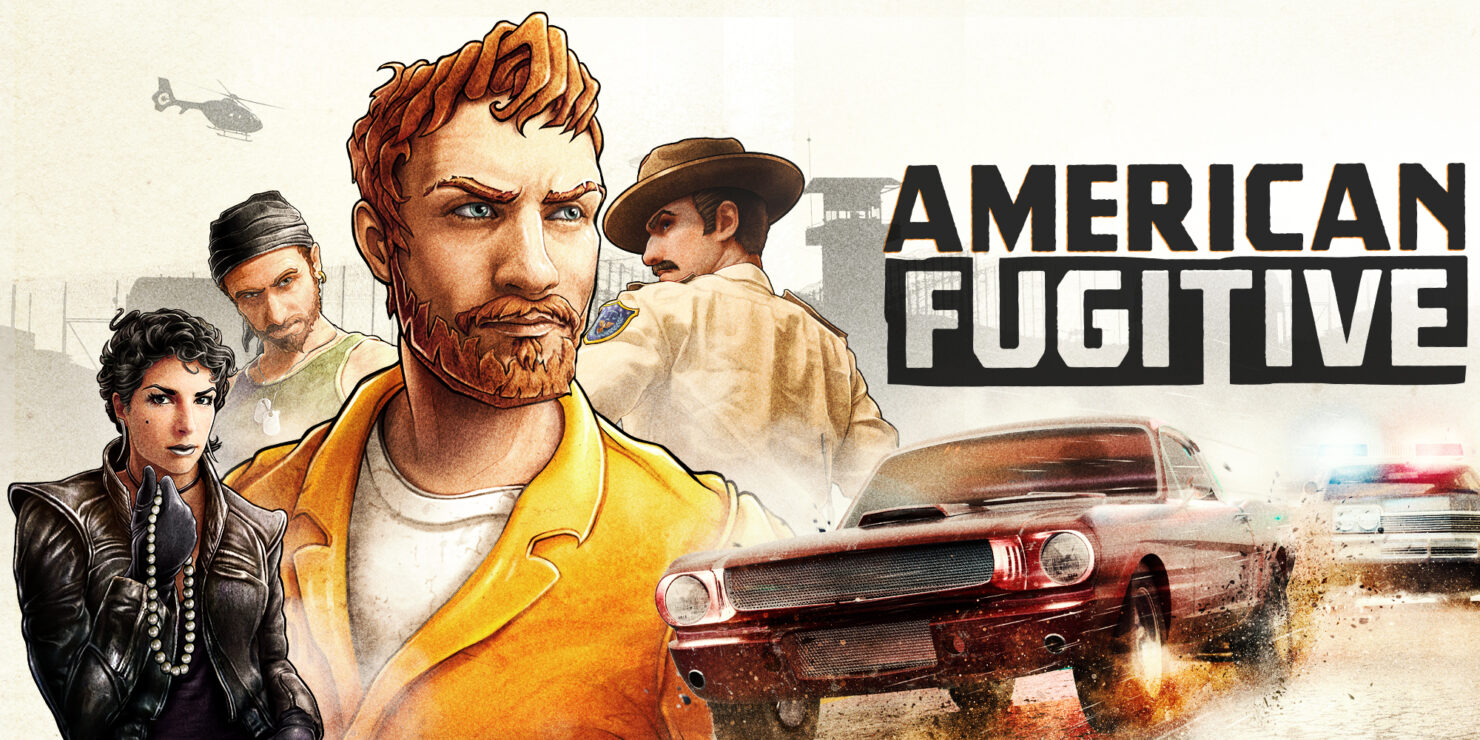 American Fugitive is a game I never knew I wanted. Before I attended EGX Rezzed I honestly knew nothing about it other than the fact that it was recommended that I check it out since I was going to be at EGX Rezzed. It's a good thing it was recommended to me as well because after checking the game out and speaking to the developers, Fallen Tree Games, I was hooked. Even more so after I had an even longer hands-on at an event at the headquarters of publisher Curve Digital. 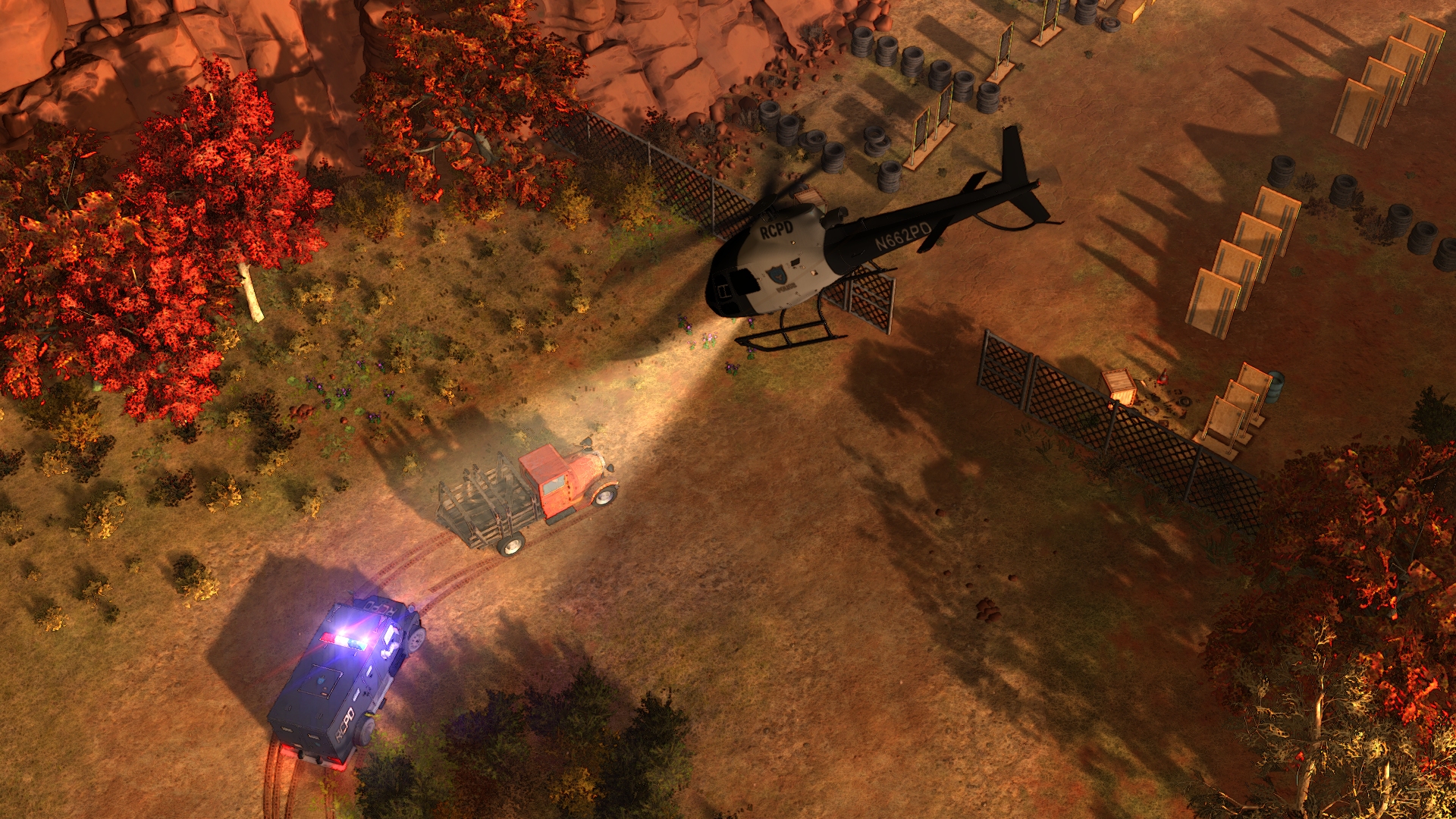 One thing to know about American Fugitive is the setting and how it impacts the game. Speaking with Lewis Boadle from Fallen Tree, he states how films like Shawshank Redemption and The Fugitive are large influences. This is a story of revenge and the game actively works with this narrative. Unlike other games of a similar nature (Grand Theft Auto, Mafia), you can't go out and buy some property. You're a fugitive who's escaped from prison, you're on the run, so you're unlikely to be trying to enter the property market. Also, the setting of the '80s is very important. There's no GPS, no social network for your face to be spread to everybody. How wanted you are also links to this.

It's the dissonance you find in these sort of games that American Fugitive is aiming to avoid. All too often you'll be taking on the role of a ruthless gangster, a serial killer or just a lunatic in general. You've just killed enough people to fill a mausoleum and now you're popping off to buy yourself an ice cream shop. Granted, sometimes you're a person who actively cares about the people around you and you've fallen into the wrong life. Here, you're on a mission for revenge and that's your driving goal and incentive.

This doesn't mean there won't be any side elements in the game. No sandbox would be complete without a bit of messing around on the side. This, from what I've seen and been told, is somewhat more toned down than you would expect from other open-world sandbox games. Games like That Ubisoft Game and Generation Zero which have all too much random content just strewn around the world, often with little purpose or meaning. This has a bit of that in the form of a few stunt jumps and time trials. However, other side elements are very much in fitting with the story, with loot stashes to find as well as rare art and other collectibles to steal. 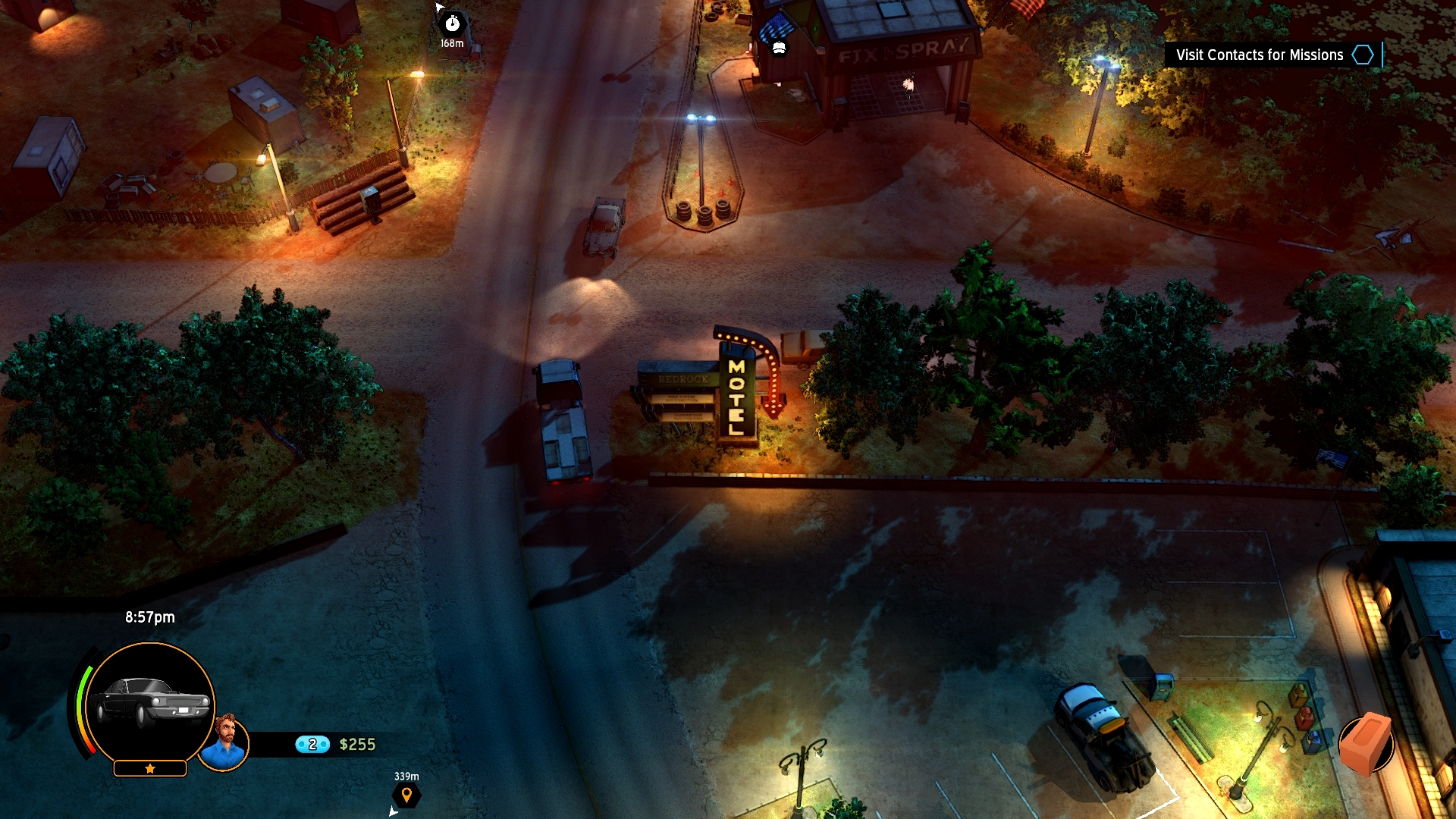 You have the freedom of choice to do whatever you like. Freedom is one of the most important aspects of the American Fugitive. The three core pillars of the game, as said to me by Lewis Boadle from Fallen Tree Games, are shooting, driving and burglary. It's what you would expect from the type of game it is, but what intrigues me more is the emergent stories that are said to come from simply playing through. As an example, linking with the loot stashes, you can overhear a rumour regarding somebody who lives down the street who has a safe with a lot of valuables. Head down to the person's house and locate the safe, but you can't get in. It just so happens the combination is the date of birth of their partner, break into the house and go snooping around, find the relevant document and et voilà, you're in.

How you steal and how the game works overall is as good as I could imagine. Particularly some of the choices in how things work. First, let's just talk about what could possibly put people off, the top-down perspective. Personally, I'm all for it. It brings me back to the GTA games of old but also helps Fallen Tree Games develop the sort of game they want. This is a studio of just a handful of people making what is a large game. Top-down enables them to make it look great, with high-quality models and a great art style that still represents everything well.

Being top-down doesn't mean you won't be able to go where you like though. Feel free to break into every house you want to. It's represented in a unique way, bringing up a blueprint of the house, where you select to move from room to room. There's a timer showing the police response time and every action you take will shave valuable seconds from you. More than that, if you happen to be noisy rather than quiet, you'll find them on you a lot quicker than expected. 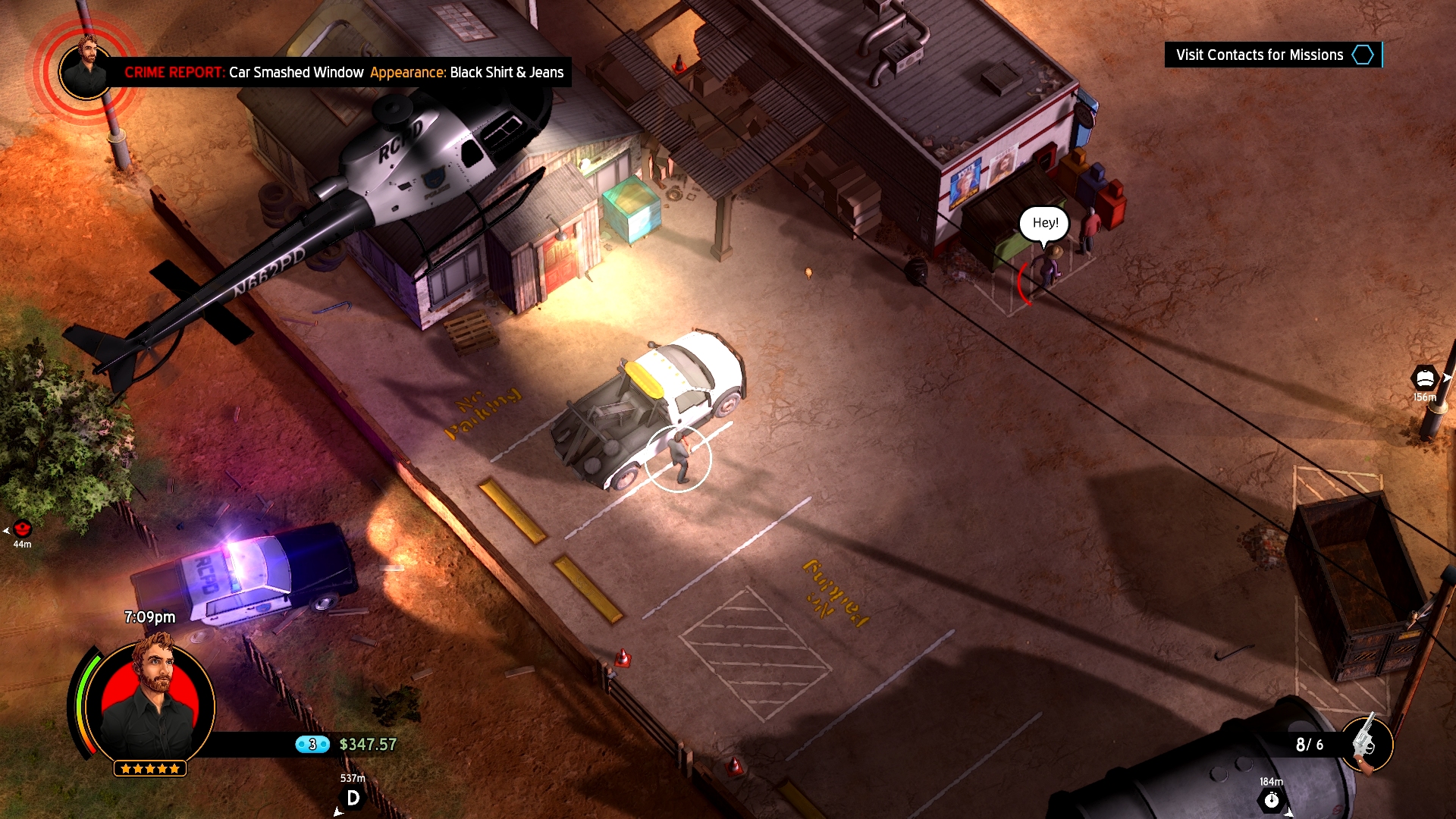 Of course, being set in the time before wide internet access, social media and such, it's a little easier to hide away. The stars system you're all accustomed to in GTA is here, but with a bit of a twist. Rather than having one base level for you as a whole, you're tracked both by the vehicle you're driving and the clothes you're wearing. Commit some crimes in a vehicle, you're going to rack up the stars. However, get out of view and jump out of the vehicle, getting out of the way before the cops come, goodbye stars. The same with clothes, if you change your clothes out of sight - so jump into somebodies back garden and steal that lovely white dress (you can) - and you'll find the stars will fall away. It does seem that you may not lose them all though.

It makes for an engaging system that's actually a lot more realistic and reasonable than that in other titles. Police will respond to alarms and they take some time to get there. They'll investigate the scene but if you're out of the way, you're safe. It's all very well explained by the game, as well as displayed on a very user-friendly, crisp and clean UI. In general, though, the game is just attractive. From colourful comic-book style visuals, with comic-book style popups to represent dialogue, to the well-designed models and the world overall. It looks great on all formats, with the switch being just that bit worse off due to the power of the console.

Though it's not only just for show, with the terrain and time of day also having an impact. It's something you've seen in other games before, of course, but it's always worth mentioning here. Is it night time? If yes, there are fewer cars on the street, less police patrolling and response times will be diminished. Are you driving, or walking, through bushes and more difficult terrain? You're going to find yourself going quite a bit slower than you may like. Environments are destructible, highly interactive and it all works to make Redrock County and American Fugitive feel more realistic and responsive. 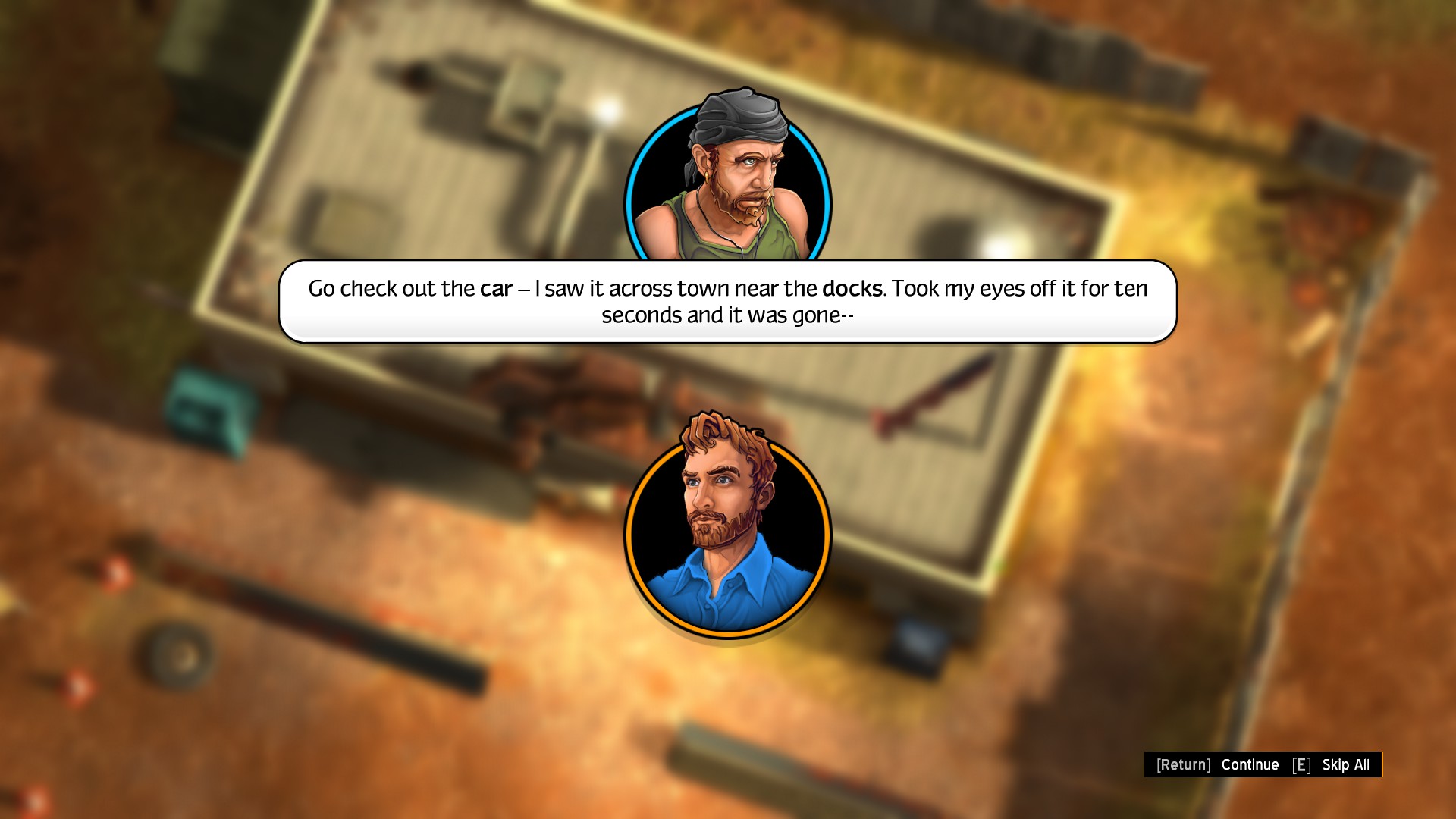 Spanning across three different parts of the fictional Redrock County, with further parts unlocking as you progress through the core story, there's a lot to do in American Fugitive. Go shopping for new cars, guns and clothes. Break into and burgle some houses. Do some stunt jumps or time trials. Maybe just go forward with your story of revenge. In the roughly two hours I've spent with the game so far, I've thoroughly enjoyed it. Without any shadow of a doubt, I'm looking forward to playing it on release.

When is that release? Well, American Fugitive will be coming to the PC, PlayStation 4, Xbox One and Nintendo Switch in around a month. To be exact, the PC & PS4 get it on the 21st of May, Nintendo Switch on the 23rd and 24th on the Xbox One. It will only be available via digital storefronts only. One thing is very important though, I've been told that the price will be representative of the indie nature of the game. Simply put, American Fugitive will be an absolute steal when it's released and costs somewhere between £15 to £25.