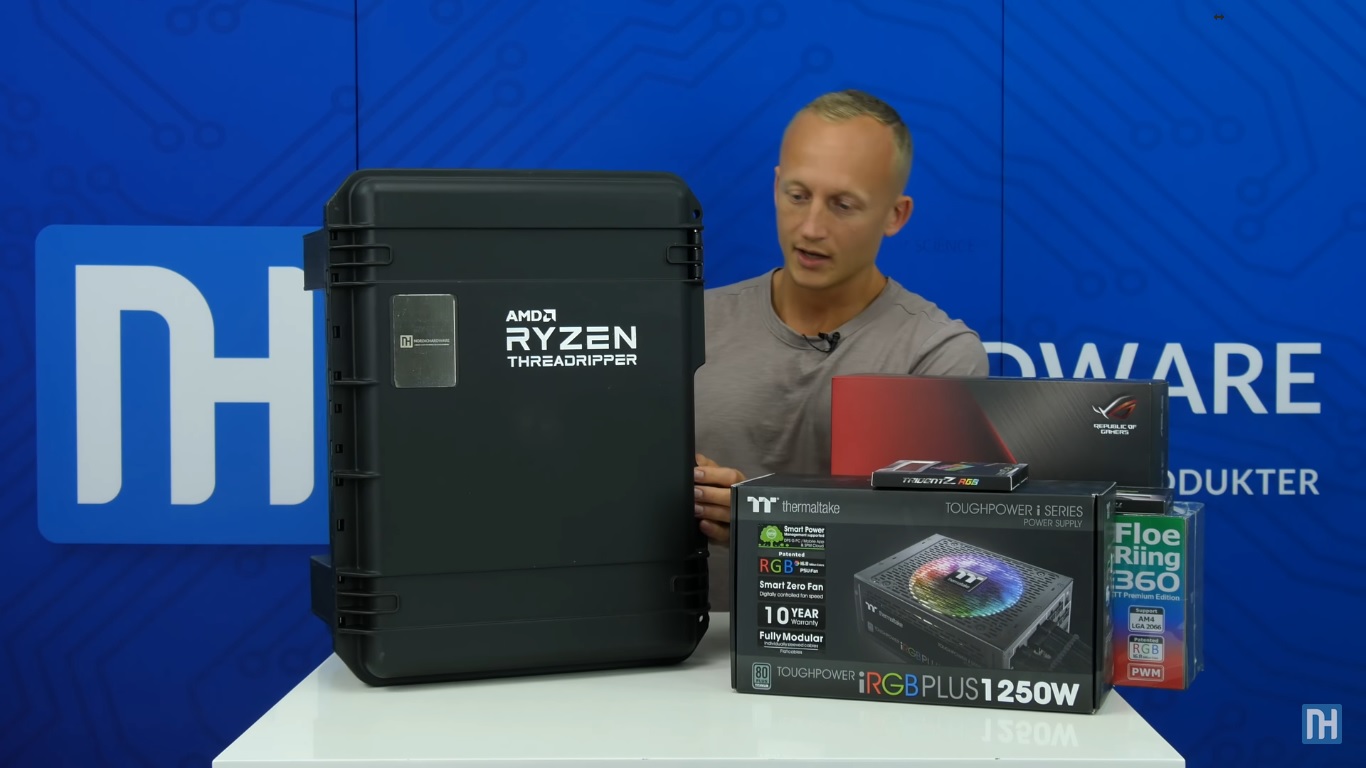 Another NDA lift has come and gone, and like always, AMD chose not to seed Wccftech with early review samples which is pretty much a tradition (we have been too naughty to be on ahem AMD's 'good' list). No access to NDA'd information is usually the price you pay for posting leaks about a company but when I looked at the sexy package that AMD delivered to its favorite reviewers, I had to grudgingly admit that they had successfully bummed me out this time.

The Ryzen Threadripper review kit contains the 1950X, 1920X, a complete test bench and even a laser engraved dummy die

Unlike the usual CPU review samples, which arrive in a tray (Intel) or in retail packaging (AMD Ryzen), Threadripper is pretty much next-level. The package arrives in not one but two big cardboard boxes. And when I say big, I mean huge. AMD sent reviewers not only the AMD Threadripper processors (with full retail packaging) but also included a complete test bench.

One box contains the test bench, which in the case of Nordichardware.se was a Thermaltake Tough Power PSU, some G.Skill Trident RGB RAM, an ASUS ROG Zenith X399 motherboard and a Thermaltake RGB Floe Ring 360mm AIO cooler. Needless to say this is a very high end test bench and surely one of the most expensive review kits I have ever seen. The second box contains a giant James-Bond-esque briefcase which contains the Threadripper CPUs (1950X and 1920X) in their retail packaging.

Even the retail packaging itself is a tad above the norm.  For the first time, we are seeing a packaging that is not built with the storage space of the retailer in mind, but rather the end customer. I believe that this is a very good indication and a sign of the times that are a-changing. The era of brick and mortar stores is ending and for e-tailers there is no advantage to neatly stacking SKUs in a straight row or column - the customer will never see them in bulk.

The retail foam looks sort of like a mini HTPC case and I won't be surprised if someone doesn't eventually do a case mod on the foam and houses a plastic pouch on the inside which unlocks to reveal not only the Ryzen Threadripper processor but a Torx key as well. That should be it right? Nope. AMD's luxurious packaging extravagance knows no bounds; if you love the unboxing experience, it wont get better then this. Usually a CPU can be found inside a plastic tray inside the retail box, but here Threadripper gets its very own plastic holder module inside the bigger plastic pouch inside the bigger foam packaging.

The cherry on top for the reviewers is AMD's love note in the form of a laser engraved Threadripper dummy package (with the site name) enclosed in a beautiful glass casing. I think I can officially say that Intel should pretty much give up already. Just like NPH's 2013 Tony Award entrance was pretty much impossible to top, I don't see how any other company can deliver more goodness in a review kit than the Threadripper package - both in terms of $$$ spent and sheer awesomeness.